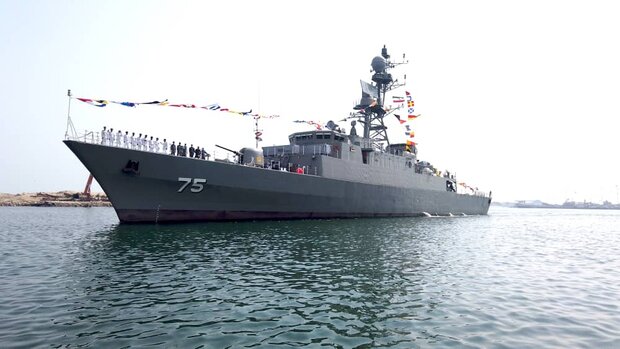 The Iranian naval forces unveiled domestically manufactured Dena destroyer and Shahin minehunter in a ceremony on June 14, 2021. Equipped with a variety of domestic equipment and defense systems, the Dena destroyer weighs more than 1300 tons and is able to sail long distances in the seas and oceans. / MEHR News Agency

The Iranian Army's naval force introduced domestically made destroyer Dena and the minesweeper vessel Shahin at a ceremony in the southern port city of Bandar Abbas on June 14.

The Dena is the fourth Iranian-made destroyer of the Mowj class along with Jamaran, Damavand and Sahand, and it is equipped with advanced electronic warfare and sonar systems, according to Admiral Amir Rastegari, the head of the Iranian Defense Ministry's Marine Industries Organization.

It has the ability to search, detect, monitor, confront and, if necessary, destroy any aerial, land and subsurface threats. Having a flight deck from which helicopters take off and land is one of the important capabilities of the Dena destroyer. It should be noted that the two vessels initially were to be unveiled by March 20, 2020.

"Dena" weighs over 1,300 tonnes, and has a length of 94 meters and a width of 11 meters. It is equipped with various electronic warfare equipment, a 76mm cannon, a 40mm cannon, two 20mm cannons, two Mehrab missiles, four Ghadir and Qader cruise missiles, and two 324mm torpedo launchers.

The minehunter vessel Shahin is the first-ever minesweeper produced by Iran, and it has a length of 33 meters and a width of 11 meters and is capable of identifying and destroying various types of mines.

Addressing the ceremony through video conference, Commander of the Iranian Navy Rear Admiral Hossein Khanzadi announced that “Dena” will be dispatched to sail the international waters, towards the Gulf of Aden, Bab al-Mandeb Strait, and the Red Sea to ensure the security of the Iranian navy in various maritime routes.

"Presence in the international waters on behalf of the Iranian nation is the right of the Navy of the Army of the Islamic Republic of Iran," Khanzadi said, adding that the ultimate goal is to remove foreign forces from the region.

For his part, Minister of Defense Brigadier General Amir Hatami said that Dena destroyer will improve the depth of Iran's strategical defense and capability of fighting against a variety of surface and submarine vessels.

He added that the threat of naval mines in the adjacent waters planted by trans-regional forces and terrorist groups and the need to be prepared to deter such threats, led Iran to develop its own destroyer.