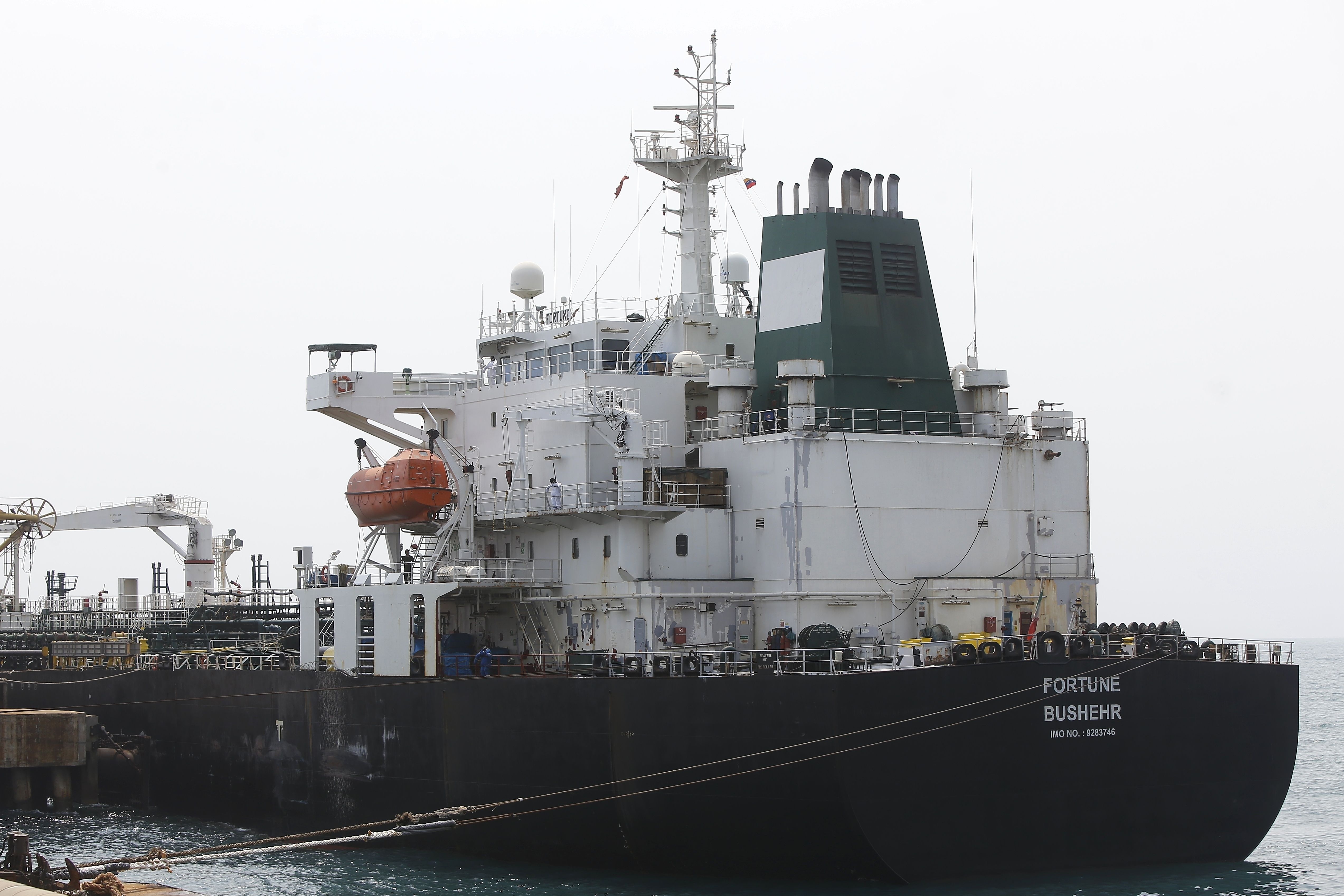 Iranian oil tanker Fortune is anchored at the dock of the El Palito refinery near Puerto Cabello, Venezuela, on May 25, 2020. The first of five tankers loaded with gasoline sent from Iran is expected to temporarily ease Venezuela's fuel crunch while defying Trump administration sanctions targeting the two U.S. foes. / AP Photo

“The second fuel ship from Iran, “Forest,” arrived in Venezuelan territorial waters on Monday morning to supply gasoline to the Caribbean country,” a website of the Venezuelan state Telesur TV network reported on May 25. “The vessel is being escorted by the Venezuelan Oceanic Patrol Yekuana, after it was located in international waters.”

The first Iranian fuel tanker, “Fortune” arrived in Venezuelan territorial waters on May 23, despite the U.S. warnings. A senior official in the U.S. administration said earlier in May that Washington was considering a response to the shipments.

The Venezuelan officials have said its navy and air force would escort the tankers after Iran warned of "consequences" if the U.S. stopped the ships from reaching their destination.

“Forest” and “Fortune” are two of the five oil tankers that Iran has sent to supply the Latin American country with fuel, and three others - “Petunia,” “Faxon” and “Clavel” - are expected to arrive in the country soon.

Iran has sent a shipment of gasoline to crisis-stricken Venezuela as a sign of cooperation between the two OPEC states, whose oil industries are subjected to U.S. sanctions. Iran will provide Venezuela with 1.53 million barrels of gasoline and refining components.

On Monday, Iranian envoy to Venezuela Hojjatollah Soltani said the fact that the U.S. has expressed no aggression against the Iranian tankers carrying fuel to Venezuela proves Americans' reasonability.

“This must make it clear to the warlords that the observance of international rules and treaties by governments, including the United States, will create a safer world for all countries and the United States,” Soltani added, according to Mehr news agency.

In a state television address on May 24, Venezuelan President Nicolas Maduro thanked Leader of the Islamic Revolution Ayatollah Seyed Ali Khamenei and President Hassan Rouhani for the assistance, saying that the two countries “want peace, and we have the right to trade freely.”

The South American country is in the grips of a major gasoline shortage as refineries are unable to operate at run rates higher than 10 percent because of a shortage of materials necessary for the production of fuels as well as an urgent need for repairs.

In April, Iran sent to Venezuela two planes loaded with equipment and chemicals necessary for the production of gasoline as it agreed to help Caracas restart one refinery, with a capacity of 310,000 barrels per day. In addition, 14 more flights were scheduled to arrive from Iran to Venezuela, with some of them carrying refinery technicians.