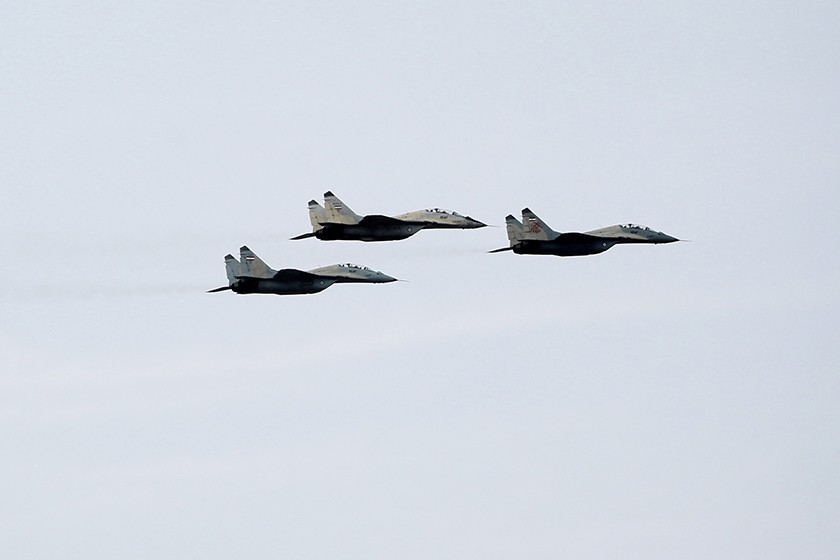 Iranian MIG-29 fighter jets are flown during the Army Day parade in the capital Tehran in 2013. / AFP - Getty Images

A MiG-29 fighter jet belonging to the Iranian army crashed during a mission in the northwestern province of Ardabil, on December 25.

“Despite severe weather conditions and difficulty in navigating through the site of the crash, efforts to locate the pilot will continue by aerial and ground search and rescue teams,” the public relations department of the Iranian Army said in a statement.

Search and rescue teams were immediately dispatched to the site, but adverse weather conditions have made it impossible to locate the wreckage and learn about the fate of the pilot so far. The jet hit Sabalan Mountain in Ardabil after a reported malfunctioning, a military source was quoted by Iran’s Mehr news agency.

The fighter jet, which was piloted by Colonel Mohammad Reza Rahmani, an experienced pilot in the Air Forces service, was a recently overhauled MiG-29. The pilot was test flying the plane and had taken off from the Tabriz air base earlier this day. Iranian Red Crescent has deployed rescue crew and helicopters to the area to discover the remnant of the aircraft.

Iran’s air force has an assortment of U.S.-made military aircraft purchased before the 1979 Islamic Revolution. It also has Russian-made MiG and Sukhoi planes, as the western sanctions have made it hard to renovate the country’s aging fleet. The Iranian aviation industry was virtually cut off from purchasing spare parts needed to repair and upgrade aircraft.

On December 11, the U.S. Treasury Department’s Office of Foreign Assets Control (OFAC) imposed new sanctions on three general sales agents for Iran’s biggest airline, Mahan Air, which are based in the United Arab Emirates and Hong Kong. The Treasury Department has accused the organizations of being, “involved in smuggling lethal aid from Iran to Yemen on behalf of the Islamic Revolutionary Guards Corps and its elite foreign paramilitary and espionage arm, the Quds Force.”

On December 22, Iran’s Minister of Transportation, Mohammad Eslami announced that three new Airbus planes will be delivered to the country in the very near future. Meanwhile, there was no confirmation from the company or any other report suggesting that the airline prepared to get the deliveries sometimes this or next year.

The sanctions imposed on November 2018 caused Airbus to stop the planned delivery of planes ordered by Iran two years earlier, in 2016. The company has delivered only three of a total of 112 planes ordered by Iran’s flag carrier Homa, known internationally as IranAir. Two more deliveries planned for late 2018 did not happen.

Homa has also ordered 80 planes from the American plane-maker Boeing and 20 more from Franco-Italian turboprop maker ATR. The ATR sent 11 aircraft to Iran before Washington imposed bans on sale of commercial planes to Iran last year, while Boeing has made no deliveries at all.