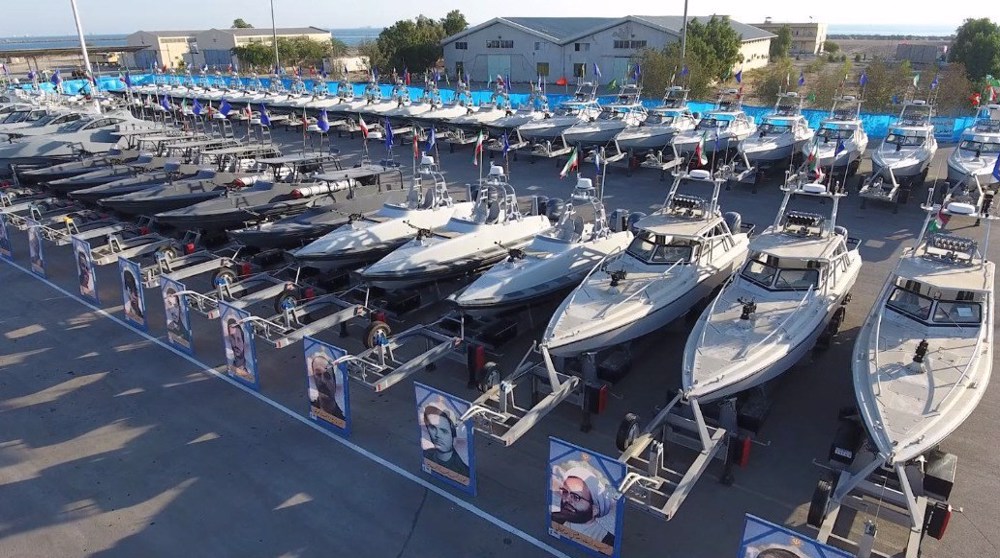 The file picture shows speedboats operated by Iran’s Islamic Revolution Guards Corps (IRGC) Navy during a parade in southern Iran on the coast of the Persian Gulf. / Tasnim News Agency

The commander in chief of the Islamic Revolution Guards Corps (IRGC), Major General Hossein Salami, has said his forces are tasked with missions on the high seas.

“The IRGC naval units have been tasked with the mission to be deployed and present in open seas,” Salami said while addressing a gathering of IRGC navy commanders in the northeastern city of Mashhad on August 18, according to the Tasnim news agency.

The general praised the Guards as an “evolving immense naval power in the Strait of Hormuz, the Persian Gulf and beyond,” but did not specify the precise location and other details of the new missions.

Salami also referenced some naval incidents involving IRGC forces in the Persian Gulf waters as symbols of the force’s achievements, including “the arrest of British and American aggressors and the capture of the vessel belonging to the old fox [the UK],” and “and other operations, which remain secret.”

Salami stressed that “IRGC forces have brought Israel to its knees in the Persian Gulf, where Iran has imposed its will in the most beautiful manner possible.”

“The IRGC Navy is currently in possession of sophisticated missiles, highly versatile vessels as well as other naval systems and equipment, and relies on the strong commitment and sense of teamwork among its personnel, homegrown know-how, domestically-developed armament, and resourcefulness,” he added.

In 2019, Iran had detained the British-flagged oil tanker, Stena Impero, in the Strait of Hormuz for two months, in apparent retaliation against UK marines’ involvement in holding an Iranian vessel off the coast of Gibraltar.

“The navy of the army has saved about 260 ships from the attack of the attackers in the free waters so far. Recently, a number of boats tried to attack an Iranian commercial ship, but thanks to the presence of the Islamic Republic of Iran Navy escort group, this ship continued its journey safely,” he said.

In late July, Rear Admiral Shahram Irani, the commander of Iran’s regular navy, said that Iran will establish a naval presence wherever it deems necessary.

The general added that Iranian interests, resources, and trade arteries were widely dispersed across the oceans.

“The navy would continue to protect such interests and support Iranian shipping,” he said, adding that Iranian naval operations enhanced maritime security for all.

The Iranian navy contained multiple independent commands covering all the world’s oceans, each with its own equipment and personnel, Irani added.

“If God forbid, some threat should arise, we can now sustain a presence thousands of kilometers from our own shores,” Irani said, declaring that the country’s “maritime economic borders” had shifted more than 2,200km.

Israeli Defense Minister Benny Gantz warned on July 5 that Iran was building up its military presence in the Red Sea. In recent years, Israel and Iran have been engaged in a covert battle at sea and exchanged accusations over maritime attacks.

Last month, the commander of the IRGC Navy, Rear Admiral Alireza Tangsiri, said that speedboats operated by force were equipped with radar-evading stealth technology, which can significantly reduce the distances at which they can be detected.

“As you know, the IRGC Navy is a completely strategic force and is in possession of all types of ammunition, ranging from tanks for naval battles to fixed-wing aircraft and drones,” he said on July 25.

Iranian Navy Commander Shahram Irani said on August 17 that the country will launch a domestically-designed and manufactured cadet training ship within the next two years. He further said that one of the blocks of the Loghman-class vessel, dubbed Khalij Fars (Persian Gulf), has already been completed and the remaining steps are being undertaken. He added that the second and third units of homegrown and semi-heavy Fateh (Conqueror) submarine are being built.

Irani also said that the conceptual design, theoretical model, and specifications of the Be’sat (Revelation) submarine have all been completed, and the watercraft is in the construction phase.

Last year, a fleet of the Iranian Navy carried out a special mission for 133 days that covered 44,000 kilometers worldwide.