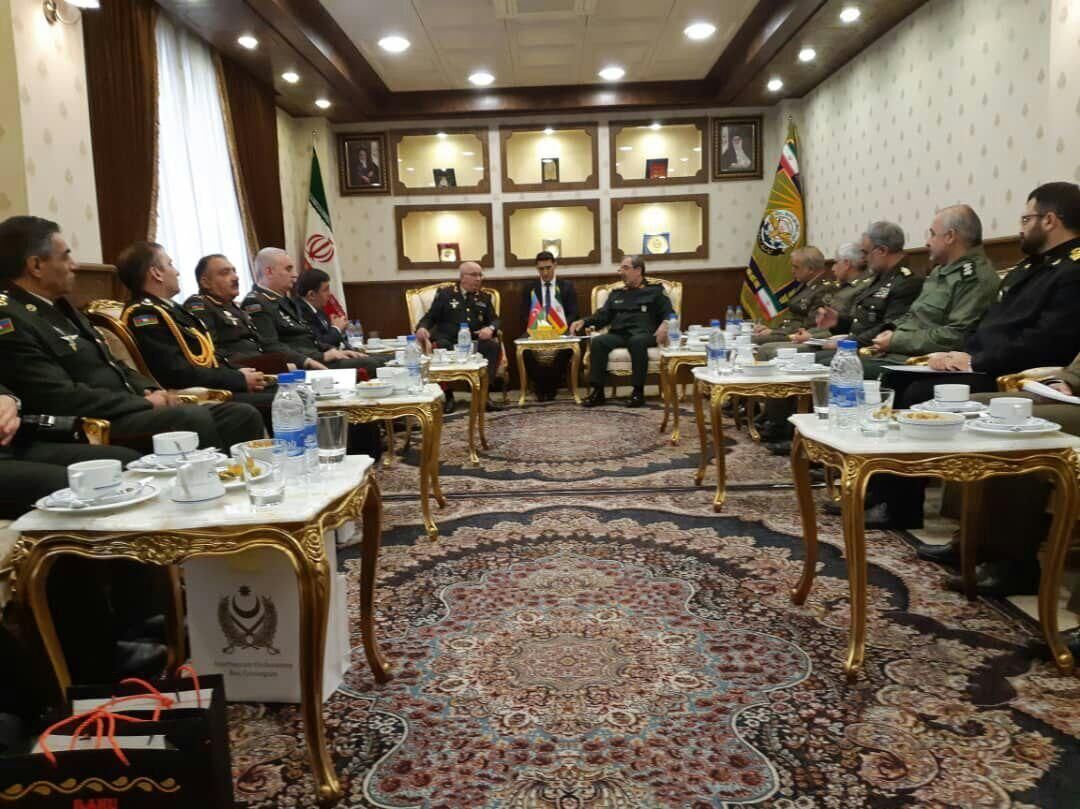 The second joint military commission of Iran and Azerbaijan convened in Tehran on February 26, 2020, in the presence of Deputy Chief of Staff of the Iranian Armed Forces for the International Affairs, Brigadier General Qadir Nezami and Azerbaijani Deputy Minister of Defense for Logistics Lieutenant-General Fuad Mammadov. / IRNA news agency

Azerbaijani deputy defense minister and a top commander of the Iranian Army have discussed cooperation in various military spheres during the second joint military commission of the two countries.

Talks between Deputy Chief of Staff of the Iranian Armed Forces for International Affairs, Brigadier-General Qadir Nezami and Azerbaijani Deputy Minister of Defense for Logistics, Lieutenant-General Fuad Mammadov took place at the meeting in Tehran on February 26.

“During the meeting, the two sides discussed areas of cooperation regarding the exchange of military delegations and officials in various fields of education, joint exercises, scientific and research collaborations, military medicine, sports, and cultural cooperation and other areas of mutual interest,” the Iranian state-run IRNA news agency reported.

In a meeting with the Azerbaijani general, Iran's Navy Commander Rear Admiral Hossein Khanzadi noted that face-to-face dialogues, especially between neighboring states, are very significant, and said that "such interactions will help us know each other better and understand common interests and undivided interests and have more collective security".

Khanzadi noted the importance of the geopolitical location of the Caspian Sea for the interaction of neighboring naval forces and went on to say that the security should be ensured collectively and naval forces of the five littoral states hold talks in a safe and secure ambiance.

The Iranian general said that the two countries’ naval forces boast good capacities for cooperation, and added that Iran is ready to hold joint maritime drills with the Naval Force of the Republic of Azerbaijan at various tactical levels.

The meeting concluded with the signing of a memorandum of understanding. The next third meeting of the Iran-Azerbaijan joint commission was agreed to be held in Baku next year.

The two countries have a record of cooperation on military, security, and defense areas. Fighting terrorism, human trafficking and trafficking of illicit drugs in the Caspian Sea and the Caucasus are common goals by Iran and Azerbaijan.

The officials of the two countries exchanged views on cross-border crime, underlined the importance of mutual cooperation and further development of cooperation in terms of effective implementation of the tasks facing the border security structures. They also agreed to continue discussions on issues of mutual interest in the field of border protection and to continue working meetings to develop cooperation.