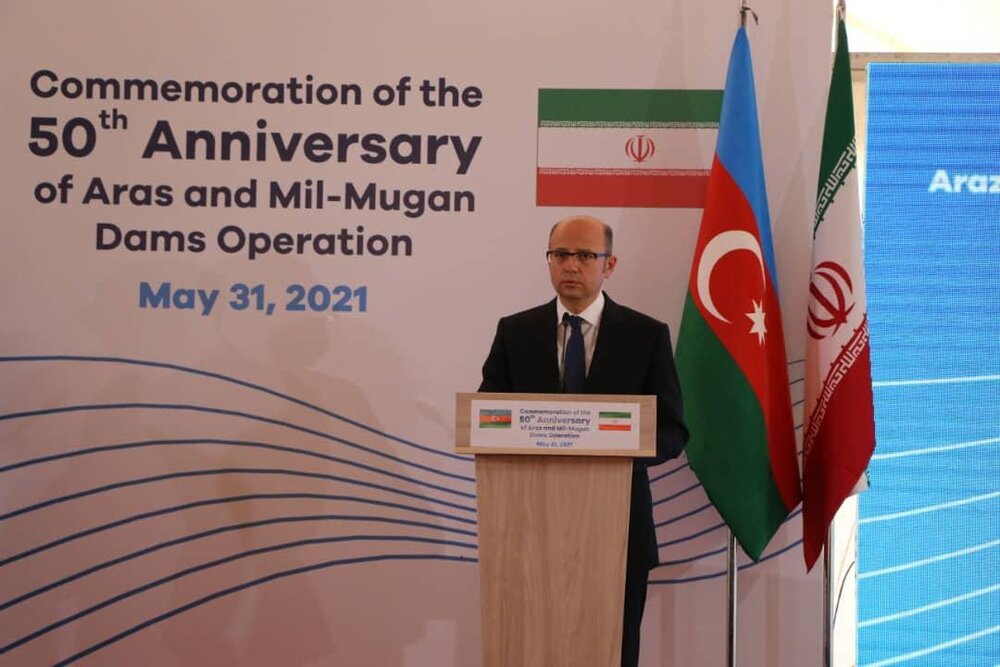 Azerbaijan’s Energy Minister Parviz Shahbazov addresses a ceremony to commemorate the 50th anniversary of the Araz and Mil-Mugan dams' operation on the joint border between Iran and Azerbaijan, on May 31, 2021. / ISNA

Iranian Oil Minister Bizhan Namdar-Zanganeh has expressed his optimism about his country's ties with Azerbaijan, which he says have expanded in the spheres of oil, gas and electricity, despite the US sanctions against the Islamic Republic.

"Iran-Azerbaijan ties are growing in all sectors and oil, gas and energy sectors are the reference points, particularly the development of joint fields in the Caspian Sea," Zanganeh said at a meeting with visiting Deputy Prime Minister of Azerbaijan, Sahin Mustafayev, the Iranian IRNA news agency reported on May 30.

The Iranian minister added that "due to foreign pressure coming from sanctions, we have not yet been able to implement them, but according to positive opinions of both countries' leaders, we will start implementing the projects".

For his part, Mustafayev pointed to oil and gas sectors as high-potential areas for developing economic relations between the two neighbors, and said that “we have a long history in cooperation in the field of gas, and since 2004 the gas required by the Nakhchivan Autonomous Republic has been supplied by Iran, and we appreciate that.”

During a ceremony commemorating the 50th anniversary of the inauguration of the Araz and Mil-Mugan dams' operation on the joint border between Iran and Azerbaijan on May 31, Iranian Energy Minister Reza Ardakanian described the Araz River as “a source of livelihood for border dwellers” and “a symbol of peace and friendship for the two countries”.

The ceremony was attended by Azerbaijani officials, including Azerbaijan’s Energy Minister Parviz Shahbazov and the chairman of Azerbaijan’s Melioration and Water Management Company, Zaur Mikayilov.