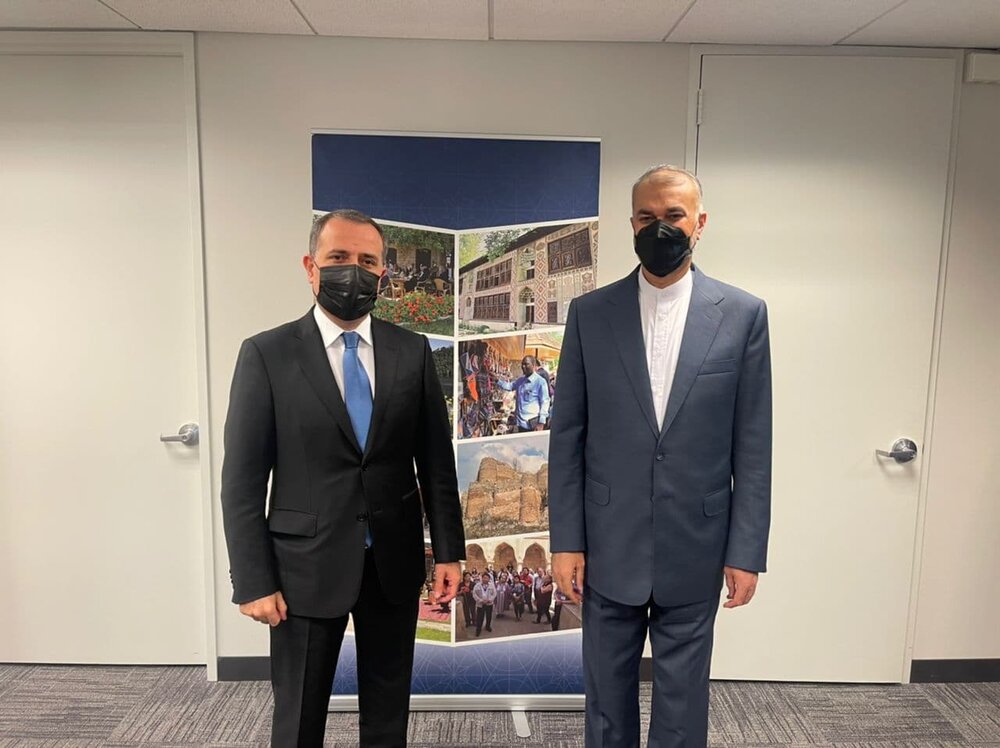 The picture shows a meeting between Iranian Foreign Minister Hossein Amir Abdollahian and his Azerbaijani counterpart Jeyhun Bayramov in New York on the sidelines of the United Nations General Assembly in September 2021. / Tehran Times

The foreign ministers of Azerbaijan and Iran discussed plans to intensify efforts to implement agreements and joint projects.

In a phone conversation on March 8, Iran’s Foreign Minister Hossein Amir-Abdollahian congratulated his Azerbaijani counterpart Jeyhun Bayramov on the 30th anniversary of the establishment of diplomatic ties between the two countries.

Amir-Abdollahian called for an increase in the number of flights between Iran and Azerbaijan, given the traffic growth, and also proposed the reopening of joint land border crossings, which have been closed for several months due to the coronavirus pandemic.

Gas supply from Azerbaijan and Iran to Europe via pipelines through Turkish territory will likely increase, as European countries are looking to diversify energy sources.

In late November, Azerbaijan, Iran, and Turkmenistan had agreed to swap specific amounts of gas. The open-ended agreement addresses annual exports of up to 2 billion cubic meters (bcm) of Turkmen gas to Azerbaijan via Iran’s territory. Under the swap deal, Iran will receive gas from Turkmenistan and deliver an equivalent amount to Azerbaijan at the Astara border. The gas that Iran will receive from Turkmenistan under the swap agreement will cater to the needs of at least five northern provinces of the country. Azerbaijan will reportedly receive 5-6 million cubic meters of new energy supplies per day.

While in Baku, Rostam Ghasemi met with Azerbaijani President Ilham Aliyev, who, in turn, recalled his meeting with the Iranian president in November 2021. Back then, President Aliyev said it opened “a new page” in the relations between the countries and expressed hope that Iranian companies would participate in the reconstruction works in Azerbaijan’s liberated lands.

The Iranian and Azerbaijani officials are currently working on the creation of the North-South transportation corridor, the construction of the Khudafarin Hydroelectric Power Stations, and the construction of a new transit road bridge over the Astarachay River on the two countries’ border near the Caspian Sea.

Iran proposed an initiative to Azerbaijan and Georgia to better connect the region by establishing a new transit corridor that would run through the two South Caucasus countries and connect the Persian Gulf to the Black Sea. In December 2021, an agreement was reached with Azerbaijani and Georgian transportation officials to do a test run on this transit route by March 2022.

The test run would see goods in Iran’s southern ports travel to Azerbaijan via the Astara border and then transferred to Bulgaria and other European countries through Georgia’s Black Sea ports.