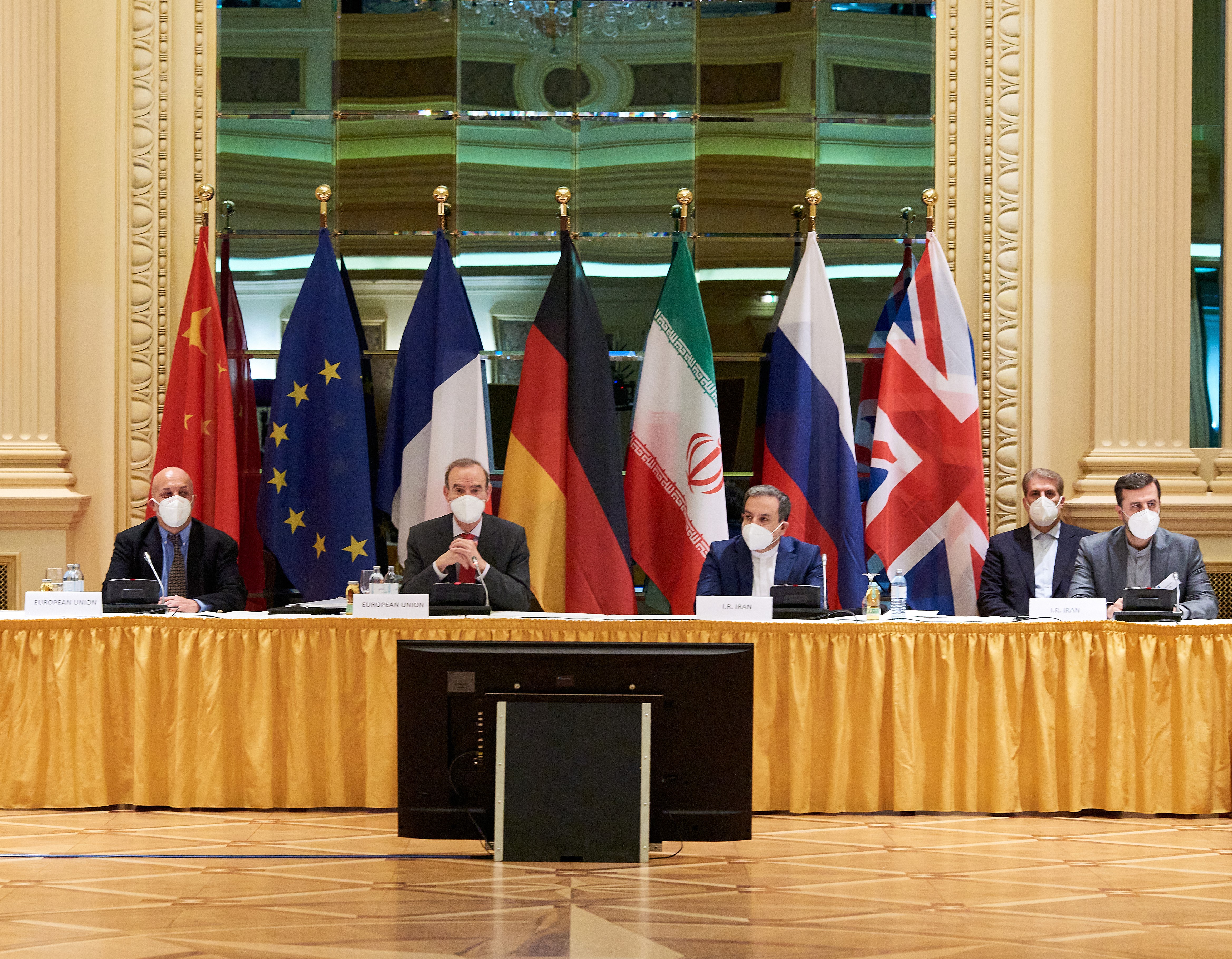 Representatives of the European Union and Iran attend the Iran nuclear talks at the Grand Hotel in Vienna, Austria, on April 6, 2021. / EPA

“Iran will not distance itself from negotiations. We believe that negotiation for the sake of negotiation will not benefit the Iranian nation or any of the negotiating parties," Amir-Abdollahian said in his first official meeting with ambassadors and heads of foreign delegations in Tehran, on September 6.

The foreign minister accused the US of "inflicting the main damage” to the Iranian nuclear deal, officially known as the Joint Comprehensive Plan of Action (JCPOA), " by withdrawing from the deal in May 2018 and described the Americans as "the main culprit in violating the JCPOA".

He underlined that Iran welcomes any negotiation that serves the rights and interests of the nation, and called on the European signatories of the deal to take practical measures to fulfill their commitments under the JCPOA.

On September 7, Iran's Permanent Envoy to the International Atomic Energy Agency (IAEA), Kazem Gharibabadi reacted to the latest report by the nuclear watchdog which criticized Iran for “stonewalling an investigation into past activities and jeopardizing important monitoring work, possibly complicating efforts to resume talks on the Iran nuclear deal."

Gharibabadi criticized the agency and its director for remarks related to the data gathered under a separate agreement with the IAEA keeping the cameras at sensitive sites still running, saying that "all the activities of Iran including its enrichment program at all stages and the production of metal uranium are within the framework of the NPT and are in line with Iran's safeguard protocols."

Iran decided to stop compliance with the Additional Protocol and signed an accord with the IAEA that allowed the latter to continue monitoring Iran’s nuclear activities for three more months. Upon the termination of the three-month agreement, Tehran agreed not to erase data from the IAEA surveillance cameras for one more month which ended on 24 June.

On September 3, US special envoy for Iran Robert Malley said that the Biden administration “can’t wait forever” for Iran to decide if it wants to restart talks on reviving the JCPOA. In May 2018, former President Donald Trump pulled out of the JCPOA and re-imposed sanctions on Tehran. Iran retaliated by abandoning most of its obligations and accelerating its nuclear program.

In response, Iranian Foreign Ministry Spokesman Saeed Khatibzadeh said that "Iran will not wait forever as America continues imposing pressure on the Iranian nation via illegal sanctions. This window is limited for Washington. I hope American officials know how they need to carry out their commitments. After the verification of the removal of sanctions and if Iran's interests are ensured under the JCPOA, Iran will carry out its commitments."

Speaking during his first live TV interview, Iran's President Ebrahim Raisi said that “we will not hesitate to talk and negotiate in any way, but what Westerners and Americans want, that is, dialogue under pressure; does that mean dialogue? If pressure is to be on the side of the dialogue, what kind of dialogue is this?”.

“Negotiations is an option as a diplomacy tool, but negotiation under pressure and threats is not acceptable at all. This has been tested already and does not work. Americans and Europeans have experienced that dialogue with pressure does not work,” Raisi added.

Several rounds of talks on reviving the JCPOA between the deal’s remaining signatories (France, Germany, the UK, Russia, China, the EU and Iran) and a US delegation have been held in Vienna since April 2021. The incumbent US President Joe Biden expressed readiness to return to the nuclear deal following his inauguration in January 2021.