Iran Warns U.S. Against Pulling Out Of Nuclear Deal As European Powers Seek To Sway Trump 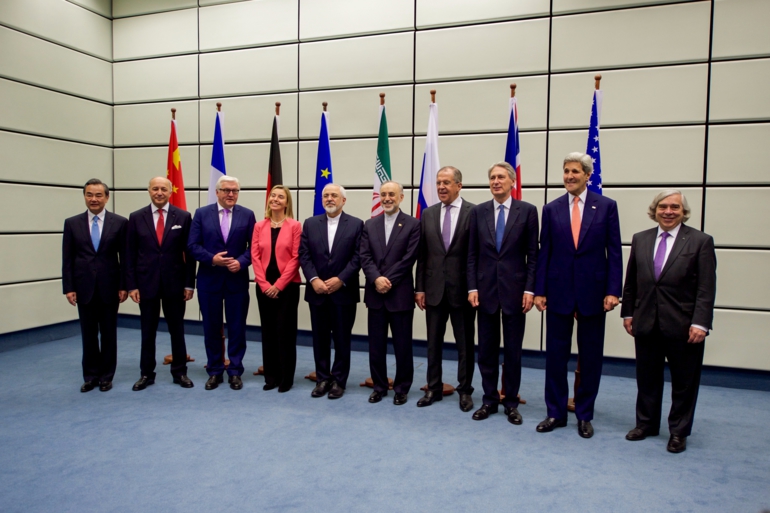 A U.S. push to change the Iran nuclear deal is sending a “very dangerous message” that countries should never negotiate with Washington, Iran’s foreign minister warned, as U.S. and North Korean leaders prepare to meet for talks.

"Iran has a wide range of options both inside and outside of the JCPOA and surely, the reaction from Iran and the international community will be unpleasant for the Americans," Iran’s Foreign Minister Mohammad Javad Zarif said in New York.

Zarif said that for French President Emmanuel Macron and German Chancellor Angela Merkel “to try to appease the U.S. President Donald Trump, [it] would be an exercise in futility.”

Trump will decide by May 12 whether to restore U.S. economic sanctions on Iran, which would be a severe blow to the 2015 pact between Iran and six major powers. He has pressured European allies to work with Washington to fix the deal.

In New York, Zarif said the U.S. has not only failed to implement its side of the deal but is asking for more than what had been agreed to in the first place. Tehran has a variety of options in store that will make the United States "regret" leaving the 2015 Iran nuclear deal, known as the Joint Comprehensive Plan of Action (JCPOA), according to Zarif.

Under the deal, which entered into force in January 2016 when former U.S. President Barack Obama was still in office, Iran agreed to limit parts of its peaceful nuclear program in exchange for removal of all nuclear-related sanctions.

Zarif blamed the U.S. government, especially the Trump administration, for the failure to honor its commitments and said it was up to the European signatories of the deal to preserve it and force Washington into keeping up its obligations.

Trump has been a vocal critic of the Iran nuclear deal which was signed between Tehran and six world powers: the U.S., France, Britain, Russia, China and Germany.

"If the European countries want to preserve the deal they have to make it sustainable for Iran; they need to impose pressure on the United States in order to compel the U.S., encourage the U.S. to implement what it undertook under the deal," Zarif said, regretting that "unfortunately, it hasn't been doing that."

Dubbing the JCPOA "the worst deal ever," Trump insists that it favors Iran, and has urged Congress and the Europeans to "fix" the agreement, or he will kill it by May 12, when he has to re-certify Iran's compliance.

Zarif made it clear that although Europeans had yet to suggest any plan that would include renegotiating the deal, such offers “will not get a positive answer" from the Islamic Republic and Tehran would make no concessions.

Trump’s demands include inspection of Iran's military sites, removing the so-called sunset clauses in the deal, and ending Tehran's ballistic missile program – all points that Republican lawmakers had criticized the Obama administration for not ensuring when the deal was being negotiated.

"The U.S. will definitely see a response from Iran and the international community if it decides to leave the deal. And it won't be a pleasant response for them," Zarif reiterated.

"The consensus in Europe and among the P5+1 is that the agreement is not renegotiable and other issues are irrelevant to it," he said, adding Tehran's interests in the agreement "must be persevered.”

EU foreign ministers met in Luxembourg to discuss new sanctions on Tehran's missile program and regional activities proposed by Britain, France and Germany in a bid to persuade Washington to keep the agreement.

However, the 28 ministers failed to reach an agreement, amid concerns that the new package of sanctions would not have an impact on the Trump administration's final decision.

"Our report states that over the past three months, all of Iran's nuclear activities, especially in the field of research and development, have been carried out in accordance with a plan set out by the Atomic Energy Organization of Iran," he added.

"America's violations of the JCPOA, its increased efforts to undermine the deal over the past three months - such as questioning Iran's compliance with the deal and setting a deadline for three European states to fix the alleged flaws in the deal - have been addressed," he said.

The head of Iran’s nuclear agency expressed the hope that the United States "comes to its senses,” but warned that Tehran's response will be "astonishing" if the nuclear deal is scrapped.

"We're ready for every scenario," Ali Akbar Salehi told reporters on the sidelines of an event in Tehran on April 21. "We have said numerous times that we are prepared to such an extent that will astonish the other side," he said.

An Iranian deputy foreign minister also dismissed the notion that Tehran is desperate enough to remain committed to the nuclear deal under any and all circumstances.

At a meeting with Norwegian Foreign Minister Marie Eriksen Soreide, Deputy FM Abbas Araqchi said that "thinking that Iran will remain committed to the nuclear deal under just any circumstance is a big mistake."

Araqchi said the accord is, "first and foremost a security agreement" whose failure will "weaken the non-proliferation system.”

He warned that efforts to link the JCPOA to other issues will "further complicate" the already complex situation in the Middle East.