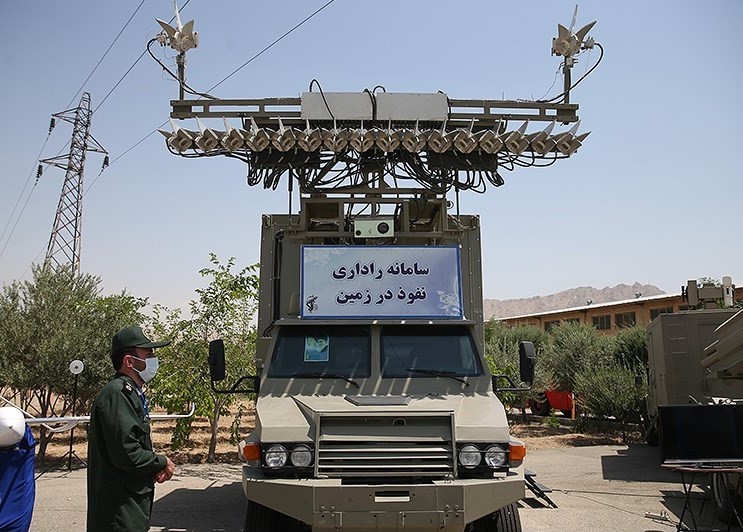 A ground-penetrating radar system used for the detection of landmines and roadside bombs. Mounted on a vehicle travelling at a speed of 10 km/h, the radar system can detect explosives hidden in the ground at a depth of up to 30 cm at a distance of 30 meters. / Tasnim News Agency

“Today, we are not dependent on foreigners in weaponry systems and we have reached self-sufficiency,” Salami said and adding that arms embargo will not affect Iran’s defense power.

BTR-50 personnel carrier is a modified version of Makran personnel carrier, which is built on an improved body and equipped with a new turret. Its turret supports a fire-control system, thermal night-vision cameras, and a laser distance measurement system that can hit surface and aerial targets. The personnel carrier’s turret also has a 30 mm caliber automatic cannon and a 7.62 mm caliber machine gun, controlled by a gunner inside the vehicle.

In 2016, a certain number of BTR-50s were transferred to Iraqi Militia Forces as part of assistance in the fight against ISIS terrorists.

Another product unveiled by the IRGC was the reconnaissance unmanned aerial vehicle (UAV) Me’raj-1, with a ceiling of 12,000 feet and a maximum speed of 140 kilometers per hour (km/h). Weighing 35 kilograms, the aircraft has a flight endurance of 10.5 hours and can carry a payload of 5 kilograms. With a wingspan of 3.6 meters, Me’raj-1 has a range of 1,000 kilometers and a data link system with a range of up to 150 km.

Another achievement of the IRGC unveiled on the same day was the So’ban-1 machine gun, a modified version of the Russian-made RPD machine gun.

A ground-penetrating radar system used for the detection of landmines and roadside bombs was among the introduced military products. Mounted on a vehicle traveling at a speed of 10 km/h, the radar system can detect explosives hidden in the ground at a depth of up to 30 centimeters at a distance of 30 meters.

On June 28, the IRGC unveiled the other three new domestically-manufactured military equipment. The director of the Self-Sufficiency Jihad Organization of the IRGC Ground Force, General Ali Koohestani, said in an interview with Tasnim that one of the unveiled products is “Qare'a”, a lightweight composite material disposable rocket launcher designed to target fortifications.

The 8-kilogram launcher enjoys the technology of soft launching which is a method of launching a missile in such a way that the rocket motor ignites outside of the launch tube; the missile is ejected non-explosively. The weapon is produced in an 80mm caliber version and its effective range is 250 meters, the general said.

The second product is the “Nafez-2” (Penetrator) man-portable recoilless launcher, which can use anti-armor and anti-fortification ammunition.

Another achievement unveiled by the IRGC is a high-precision sniper rifle dubbed “Ashtar”, with a caliber of 7.62×64 millimeters. Its effective range is 800 to 1000 meters and it has a zoom scope of 24X.

The United Nations banned Iran from buying major foreign weapon systems in 2010 amid tensions over its nuclear program. That blocked Iran from replacing its aging equipment, much of which had been purchased before the 1979 Islamic Revolution.

The embargo so far has stopped Iran from purchasing fighter jets, tanks, warships, and other weaponry, but Iranian military experts have in recent years made great headways in manufacturing a broad range of indigenous equipment, making the armed forces self-sufficient in the arms sphere.

On June 28, the U.S. special representative for Iran, Brian Hook, said that an expiring United Nations weapons embargo on Iran must remain in place to prevent it from “becoming the arms dealer of choice for rogue regimes and terrorist organizations around the world”.

“If we let it expire, you can be certain that what Iran has been doing in the dark, it will do in broad daylight and then some,” Hook said, adding that the world should ignore Iran’s threats to retaliate if the arms embargo set to expire in October is extended.