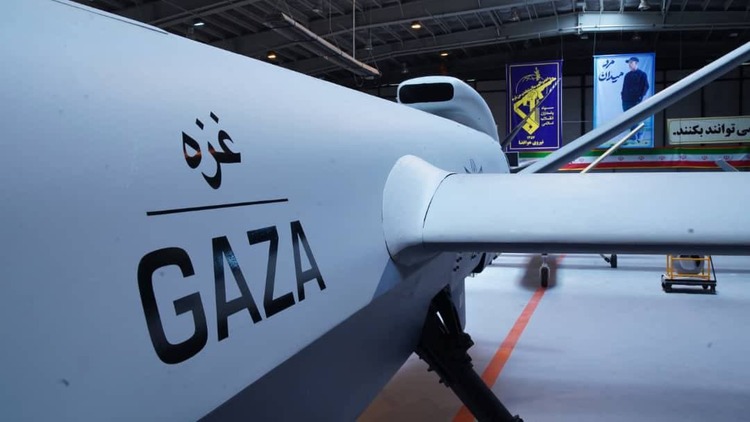 The Gaza drone can carry 13 bombs more than 2,000 kilometers in combat missions and 500 kilograms of various surveillance and signal equipment. / Fararu News Website

The Islamic Revolutionary Guards Corps (IRGC) introduced new drone, radar, and missile systems in a ceremony on May 21.

The IRGC unveiled the unmanned aerial vehicle “Gaza” and a surface-to-air missile system dubbed “9th of Dey” and “Quds” radar system on Friday in the presence of the IRGC Commander-in-Chief, Major General Hossein Salami and the commander of the IRGC Aerospace Force, Major General Amir Ali Hajizadeh.

The Gaza drone designed by local military experts can carry out various surveillance, combat, reconnaissance missions with a flight duration of 35 hours. It can carry 13 bombs more than 2,000 kilometers in combat missions and 500 kilograms of various surveillance and signal equipment. The drone can carry out missions in monitoring forests, rescue operations, and assist in natural disasters such as floods and earthquakes.

Another achievement, the “Quds” radar system, can be deployed and moved quickly. The new air defense system, which is apparently for lower altitude targets, can be based on a road-mobile medium-range air defense missile system known as the 3rd Khordad. Based on the Russian-made S-300, the 3rd Khordad was used by Iran to down the US Global Hawk in 2019.

Meanwhile, the homegrown surface-to-air missile system “9th of Dey” can confront and destroy various threats at close range, including cruise missiles, aircraft bombs, warplanes, and drones. “9th of Dey” is a date of the Persian calendar (December 30), when the Iranian government organized a large demonstration against the opposition forces who earlier protested against the 2009 Iranian presidential election.

The country’s Defense Minister, Brigadier General Amir Hatami, told reporters following the signing of the agreement that Iran is ranked fifth or sixth globally in terms of drone capability.

In January, the Iranian army staged a massive exercise using various homegrown drones for multiple operations, including aerial interception, the launch of air-to-air missiles, the detonation of ground targets with bombs and missiles with pinpoint accuracy, and suicide strikes. Military experts have dramatically increased the flight endurance of suicide UAVs, manufacturing drones with an operational range of 4,000 kilometers.