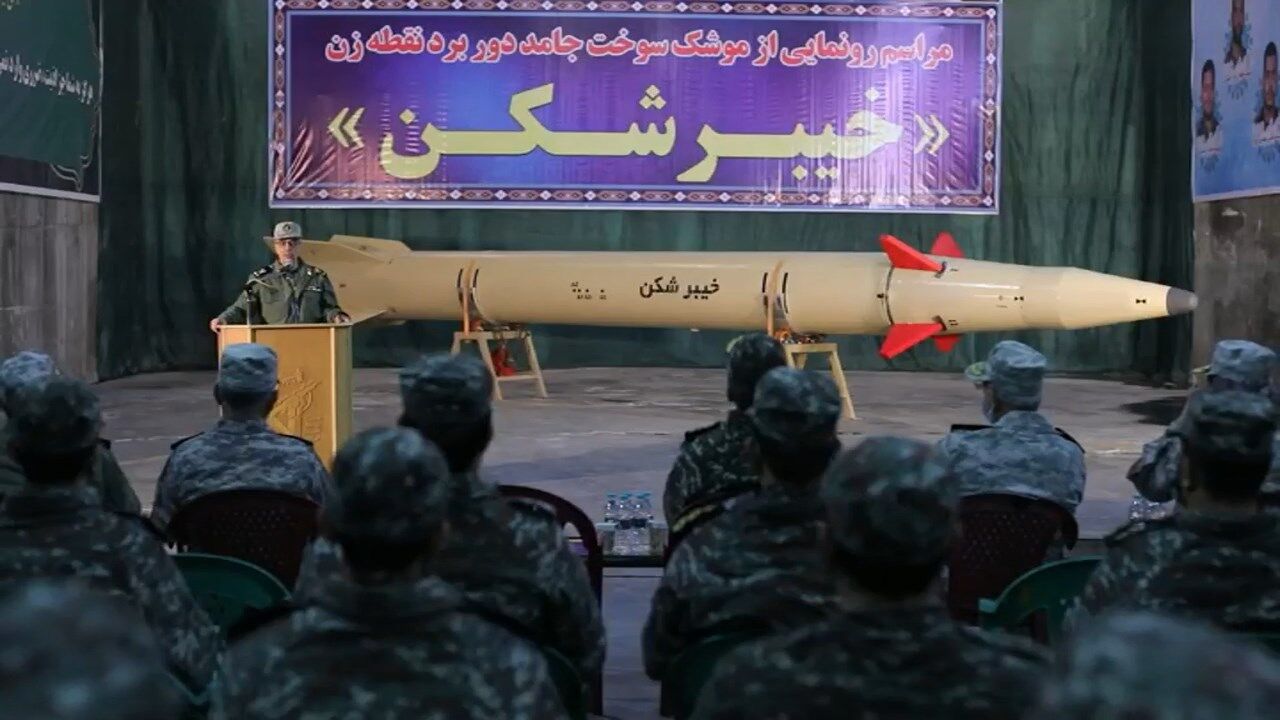 Chief of Staff of the Iranian Armed Forces Mohammad Hossein Baqeri addressed a ceremony to unveil "Khaybar Shekan", a ballistic missile capable of hitting targets within a range of 1,450 kilometers with pinpoint accuracy. / IRNA news agency

The Islamic Revolution Guards Corps (IRGC) has unveiled a new long-range ballistic missile with a range of 1,450 km.

“The preparation time for the launch of the missile named Khaybar Shekan [Khaybar Breaker in Persian] has been practically reduced to one-sixth of the average duration, and the materials used in the warhead of this missile have increased its explosive power to several times greater than TNT,” IRGC Aerospace Force Commander Brigadier General Ali Hajizadeh said after unveiling the missile, on February 9.

“With its performance, the missile has extremely increased the power of the missile units of the IRGC Aerospace Force,” Iran’s Tasnim news agency quoted the commander as saying.

The Iranian third-generation long-range missile Khaybar Shekan is capable of penetrating into missile shields with high maneuverability during the landing stage. The solid-propellant missile had also the ability to penetrate missile defense systems.

The modified design of the missile has reduced its weight by a third compared to similar missiles, and it requires significantly less time to set up and launch compared to old-generation missiles. The missile has been fully designed and manufactured by the local experts of the IRGC Aerospace Force.

In late December, the IRGC used ballistic missiles and drones to target a mock-up of the Israeli nuclear plants during the five-day Great Prophet-17 drills. In early February, the Israel Air Force conducted a drill simulating a massive attack on Iran’s nuclear program, which employed dozens of fighter jets.

Chief of Staff of Iran’s Armed Forces Major General Mohammad Baqeri said on February 7 that his country could turn into one of the world’s leading exporters of military equipment if US sanctions against Tehran were lifted.

The commander added that Iran’s military prowess has deterred outside threats to a level where the “thought of military aggression against Iran can hardly cross the head of the dishonest enemy”.

The resolution urges Iran to refrain from working on ballistic missiles designed to be capable of delivering nuclear weapons for up to eight years after the JCPOA, an agreement signed between Tehran and six world powers to limit its nuclear program. Under the terms of the resolution, the Iranian arms embargo was lifted on October 18, 2020.