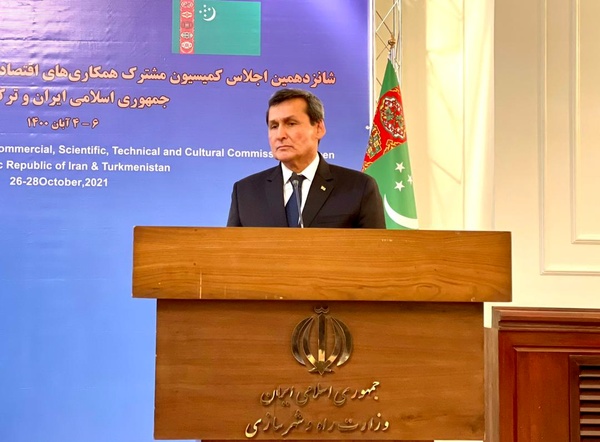 Iran and Turkmenistan have signed agreements during Turkmen Foreign Minister Rashid Meredow’s visit to Iran this week to boost ties in multiple areas, including energy, trade, logistics, and transportation.

As part of his visit to Tehran, Turkmenistan’s high-ranking diplomat met his counterpart Hossein Amir-Abdollahian and Iran’s Oil Minister Javad Owji, as well as chaired the 16th Joint Iran-Turkmenistan Economic Commission’s meeting that brought together officials from both countries.

The Commission’s meeting resulted in signing a memorandum of understanding (MoU) on joint economic, trade, scientific, technical, and cultural cooperation. The document was signed by Rashid Meredow and Rostam Ghasemi, Iran’s Roads and Urban Development Minister.

According to Minister Ghasemi, the two countries agreed to swap Turkmen natural gas through Iran’s territory, as well as jointly explore hydrocarbon resources in the sea and invest in the oil sector.

The resumption of gas swaps with Turkmenistan was suspended under the government of former Iranian President Mahmoud Ahmadinejad. On October 26, 2021, Oil Minister Javad Owji blamed the previous government for failing to settle gas import debts to Ashgabat. He said that the ministry had plans to settle outstanding debts owed to Turkmenistan, a matter previously taken to international tribunals.

Officials from the two neighboring countries have also reached an agreement to allow Iranian companies construct a 400 kV transmission line in Turkmenistan, to further deliver electricity to Iran.

Meanwhile, Iran and Turkmenistan are eager to boost cooperation in the realms of trade, transit, and transportation.

Roads and Urban Development Minister Rostam Ghasemi hailed the enhancement of cross-border transport agreements. He added that the sides agreed to increase fleet traffic at the borders and working hours of border terminals, as well as to expand maritime and rail transport cooperation.

For his turn, Turkmenistan’s Foreign Minister Rashid Meredow said that “a certain part of the Shahid Rajai Port has been granted to Turkmenistan to increase transit between the two countries,” referring to an Iranian port in the Persian Gulf. This waterway is expected to help Ashgabat open up maritime trade routes to China and India.

Also, Iran’s strategic Chabahar port came into the spotlight as part of the meetings between the countries. Iran welcomes Turkmenistan to join the route to enhance the north-south corridor involving Iran, India, and Afghanistan.

On October 26, Iranian Foreign Minister Hossein Amir-Abdollahian said at a joint press conference with his Turkmen counterpart Rashid Meredow that over 100 memoranda of understanding between Tehran and Ashgabat were the subject of revision and upgrading. Amir-Abdollahian noted that the trade volume was to expand, stressing that transit routes from four different points inside Iran were to reopen following Iran’s passing of the coronavirus peak.

Previously, Iranian Border Guards Commander Brig Gen Ahmad Ali Goudarzi announced the reopening of the Iran-Turkmenistan border (Incheboron border checkpoint) following a 20-month closure due to the outbreak of the coronavirus pandemic and the resumption of bilateral trade.

“Cooperation and diplomatic relations with neighboring countries are well established,” Goudarzi said on October 23, adding that both trade and economic visa services were active at border checkpoints.

“None of the border crossings and terminals are closed, and trade and economic exchanges at the borders are well underway,” he added.