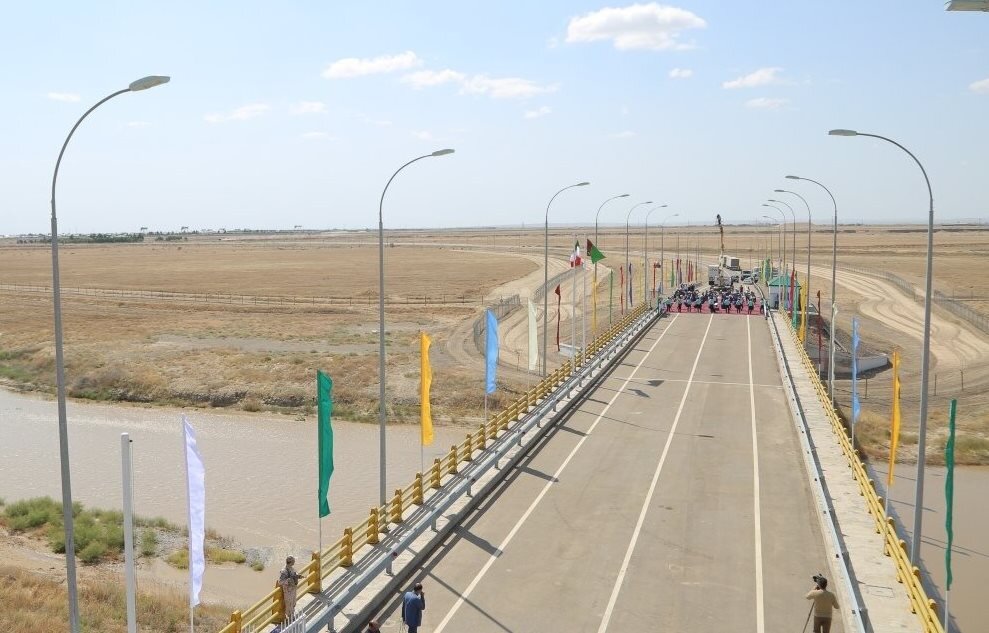 Iran’s Minister of Transport and Urban Development Mohammad Eslami and the Turkmen Minister of Construction and Architecture Rahim Gandymov inaugurated a new joint border bridge in Sarakhs, in the Iranian northeastern province of Khorasan Razavi in a video conference on June 8, 2020. / Tehran Times

Officials from Iran and Turkmenistan have inaugurated on Monday a joint border bridge facilitating bilateral trade between the two neighboring countries.

Mohammad Eslami, who heads Iran’s transport and urban development ministry, inaugurated a new border bridge between Iran and Turkmenistan in Sarakhs, northeast Iran in a video conference with Turkmen Minister of Construction and Architecture Rahim Gandymov, as well as local governors of Iran’s Khorasan Razavi Province and Turkmenistan’s Ahal Region.

‘‘I am sure that we can benefit from this [bridge] to strengthen the [two sides’] economies, trade, and commerce and open up new horizons for development,’’ Eslami said while addressing the opening ceremony, according to a report by Iran’s Ana.ir news website.

Eslami also added that the bridge would play a key role in boosting trade between the two countries and help Iran expand its economic ties with the countries of the Central Asia region.

The new joint car bridge is located on the border point between Turkmenistan and Iran’s Sarakhs city in the Iranian northeastern province of Khorasan Razavi. The project has been implemented under the framework of the body’s infrastructure and development plans, and in accordance with the Ashgabat transit agreement, as well as the agreement between the Caspian littoral states.

The bridge is 96 meters long and 15.1 meters wide, and it is the second joint border development project which has been constructed to expand and develop transit and increasing road transport.

The opening of the Sarakhs Bridge comes as Iran and Turkmenistan have yet to fully open their borders after more than three months of closure over the novel coronavirus pandemic. Having about 1,000 km of the joint borderline, Turkmenistan is also a gate for Iran to reach Central Asia.

According to the data compiled by Iran’s Health Ministry, 2,011 new coronavirus cases and 81 deaths have been confirmed in Iran during the past 24 hours. The total number of infections and deaths has hit 177,938 and 8,506 respectively.

Iran has erected disinfection installations along the border, including several 20-meter-long tunnels, to ensure shipments passing through the frontier are free of any virus.

Iranian transport minister Mohammad Eslami believes the complete installation of the disinfection equipment at the border points is an indication of Iran and Turkmenistan’s efforts and determination for reopening borders and resuming trade in the region.

In an interview with the Iranian state news agency IRNA, Iranian Ambassador to Turkmenistan, Gholam-Abbas Arbab Khales called the newly-inaugurated bridge the ‘‘Friendship Bridge,’’ and said that ‘‘the Friendship Bridge is the source of more strengthening amicable and friendly ties between the two nations.’’