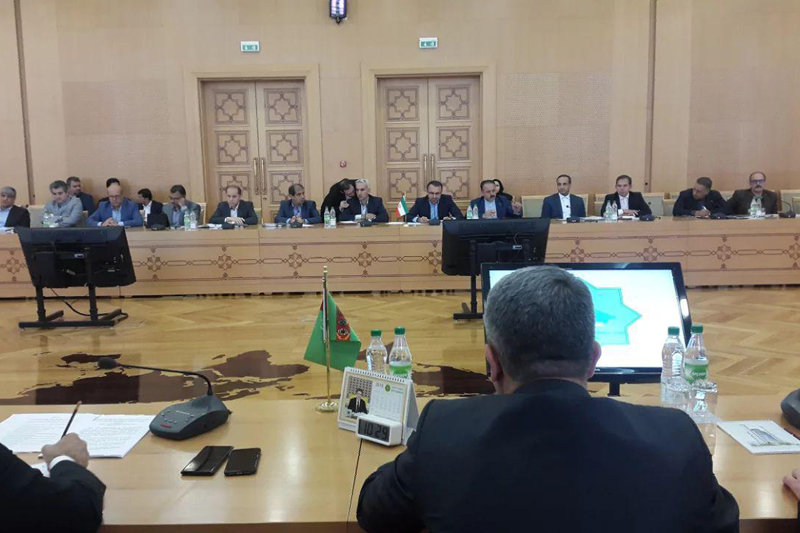 A wide range of issues related to transportation, telecommunications, economy and trade, fuel and energy, industries and mines, science and culture have surveyed, and the two sides discussed ways to expand cooperation in these fields at the 15th Iran-Turkmenistan Commission of Economic Cooperation convened in Ashgabat on October 1-2. / Dolat.ir

The Iranian and Turkmen economic delegations have discussed ways to expand cooperation in the fields of transportation, trade and energy at a meeting of the economic commission in the Turkmen capital.

A wide range of issues related to transportation, telecommunications, economy and trade, fuel and energy, industries and mines, science and culture have surveyed, and the two sides discussed ways to expand cooperation in these fields at the 15th Iran-Turkmenistan Commission of Economic Cooperation convened in Ashgabat on October 1-2.

Shahram Adamnejad, the deputy minister of roads and urban development for transportation affairs, headed the Iranian delegation which was comprised of representatives of officials from different ministries, according to Iran’s Fars news agency.

Several documents on the bilateral partnership were signed between the two Caspian littoral states after the meeting.

On September 28, in a message sent to Turkmen President Gurbanguly Berdimuhamedow on the occasion of Independence Day, his Iranian counterpart Hassan Rouhani said that “the history of relations between the two countries has always been based on friendship, good neighbourliness and mutual respect. I believe that the friendship and cooperation between the two countries in various fields will develop day-by-day,” the official website of Rouhani reported.

Iran is the third biggest foreign trade partner of Turkmenistan. The two countries focus on joint activities in the transport and transit sector, as well as in the field of road construction and the electricity and gas sectors. Several major economic projects have been implemented over the years of long-term cooperation.

The Kazakhstan-Turkmenistan-Iran railway and the Uzbekistan-Turkmenistan-Iran-Oman corridor are intended to contribute to increasing trade and economic cooperation between Central Asian and Middle Eastern states. In addition to gas pipelines running along the borders between Iran and Turkmenistan, the Dostluk (“friendship”) dam was built thanks to the joint efforts of both sides.

Despite the diplomatic and economic warmth in recent months, a gas purchasing dispute between Turkmenistan and Iran still lingers. Turkmenistan stopped gas supplies to Iran – rich in fossil fuel resources in the southwest but energy-starved in the northeast, where Iran shares a border with Turkmenistan – in January 2017, demanding that Tehran settle an outstanding debt.

In August 2018, Turkmenistan’s state company Turkmengaz filed a lawsuit against National Iranian Gas Company with the International Court of Arbitration. Iran followed with a counterclaim the following October, but no court verdict has yet been issued.

During the Caspian Economic Forum in Turkmenistan on August 12, Russia and Iran expressed their discontent regarding the long-proposed Trans-Caspian Gas Pipeline (TCP) project. The subsea pipeline is intended to deliver gas from Turkmenistan to Azerbaijan for further transport through the Southern Gas Corridor (SGC) to diversify supply sources and transit routes for Europe.

Both Iran and Russia have opposed the construction of alternative undersea pipelines across the Caspian due to ecological issues. The potential flow of Turkmenistan’s massive gas resources to Europe would profoundly challenge the market share of key gas suppliers to the continent.