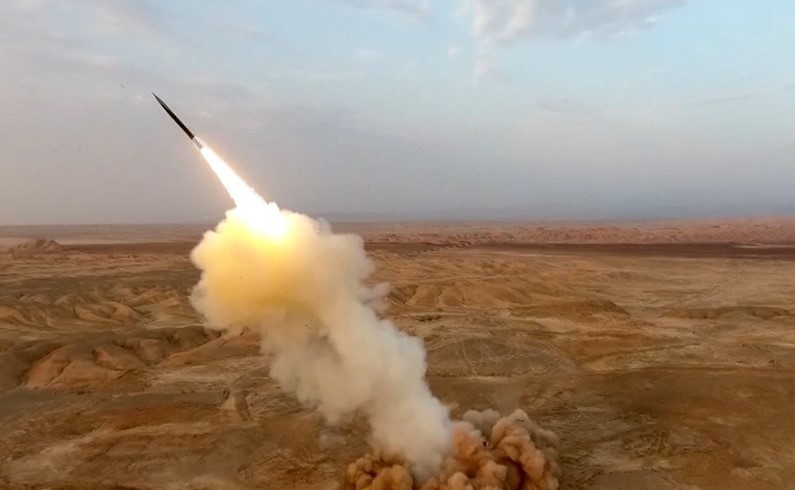 Iran has test-fired ballistic missiles against hypothetical enemies, during the second day of the final stage of the massive naval drills in the country's southern region.

The camouflaged surface-to-air ballistic missiles were fired from the depths of the ground. The IRGC said in a statement that it was "the first time in the world" that such an exercise had been carried out.

The IRGC Navy and the IRGC Aerospace Force took part in the joint drills codenamed “Payambar-e Azam 14”, and conducted ground, aerial, naval, and space operations in the southern province of Hormozgan, western parts of the Strait of Hormuz, and the Persian Gulf.

Sukhoi-22 fighter jets destroyed targets on the Farur island with winged bombs during the war games. A lot of smart bombs were dropped to detonate the hypothetical enemy’s targets with great accuracy, according to Iran’s Tasnim news agency.

The air defense units also exercised pinpoint firing at aerial targets and launched Hormuz ground-to-ground missiles and Fateh ballistic missiles. Several domestically manufactured drones, including Shahed-181, Mohajer, and Bavar, launched a strike on the targets, including a fake aircraft carrier, while various types of sea-to-sea and coast-to-sea missiles were fired as part of the drills.

The IRGC troops also exercised offensive mine-laying operations and tactics to cut off the naval connections of the imaginary enemy. The final stage of the military exercise included joint operations by missile units, vessels, and drones from the IRGC Navy and missile, drone, and radar units from the IRGC Aerospace Force.

Satellite images taken by the homegrown “Noor” (translated as "light" in Persian) satellite that was launched into space in April have been used to evaluate the situation in the training zone.

Meanwhile, ballistic missile fire detected from the drills resulted in American troops being put on alert at Al-Dhafra Air Base in Abu Dhabi in the United Arab Emirates and Al-Udeid Air Base located in the capital Doha of Qatar, which are hundreds of kilometers away from where Iran put the replica aircraft carrier. The replica used in the drill resembles the Nimitz-class carriers that the U.S. Navy routinely sails into the Persian Gulf from the Strait of Hormuz.

“The incident lasted for a matter of minutes and an all-clear was declared after the threat ... had passed," U.S. Army Maj. Beth Riordan, a Central Command spokesperson, said on July 28, according to Associated Press.

Speaking on the sidelines of the drills on July 28, the IRGC’s Chief Commander, Major General Hossein Salami said that Iran would never initiate any offensive against any country but would assume a fully offensive mode when it comes to tactical and operational performance.