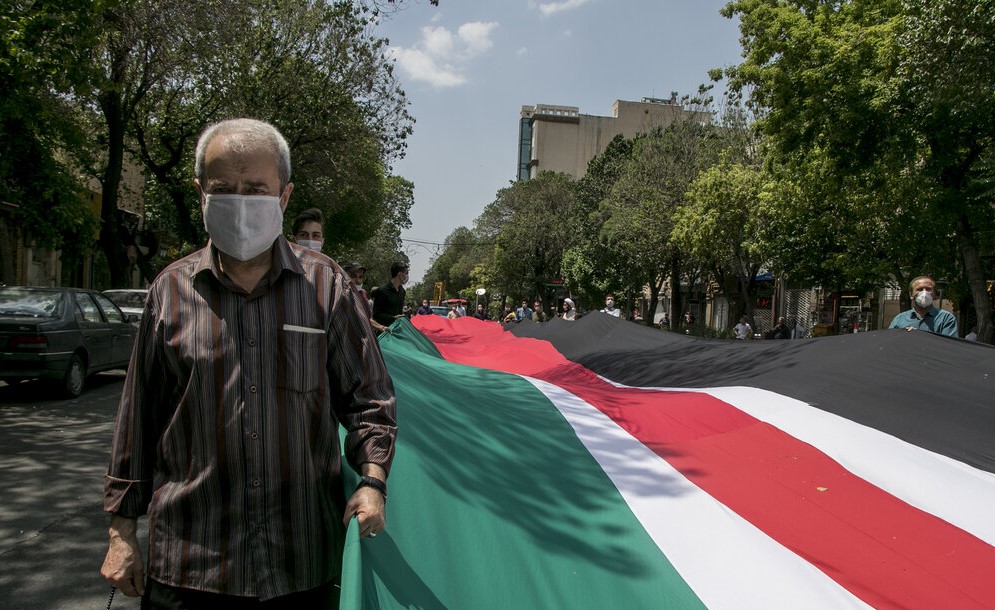 Quds Day is an annual event held on the last Friday of Ramadan that was initiated by Iran in 1979, during which demonstrators express their solidarity with the Palestinian people and opposition to Israel. / MEHR News Agency

On the occasion of Quds Day, Iran's Supreme Leader Ayatollah Seyyed Ali Khamenei issued a statement describing “Zionism” as a “virus that will be uprooted from the region."

“Today the coronavirus is a reality and yet all wise people agree that it is necessary to fight it. Undoubtedly, the long-lasting virus of Zionism will not last much longer, and it will be uprooted thanks to the determination, faith and pride of the youth” Khamenei made the remarks on May 22 on the occasion of the International Quds (the Arabic name for Jerusalem) Day, according to the official website of the Iranian leader.

Quds Day is an annual event held on the last Friday of Ramadan that was initiated by Iran in 1979, during which demonstrators express their solidarity with the Palestinian people and opposition to Israel. Quds Day exists in opposition to the Jerusalem Day celebration instituted by Israel in May 1968, which is an Israeli national holiday commemorating "the reunification of Jerusalem" and the establishment of Israeli control over the Old City in the aftermath of the June 1967 Six-Day War.

Iran's Foreign Ministry in a statement also urged all the Muslims of the world to pressure international organizations to fulfill their legal humanitarian duties in order to defend the people of Palestine and end Israeli occupation and savage crimes and escalation.

“Palestine faces three major issues today including, the unique crimes of Israel, the resistance of the Palestinians, and silence of the international community and some Western and Islamic countries”, the official website of the ministry quoted the statement as saying.

On January 28, US President Donald Trump formally unveiled the peace plan in a White House press conference alongside Israeli Prime Minister Benjamin Netanyahu, which is officially titled “Peace to Prosperity: A Vision to Improve the Lives of the Palestinian and Israeli People” to resolve the Israeli–Palestinian conflict. Earlier, in June 2019, the Trump administration released the economic portion of the plan.

The plan, dubbed by Trump as the “deal of the century”, is said to require too few concessions from the Israelis, while imposing harsh requirements on the Palestinians whose leaders were not invited to participate in negotiations. Under the terms of the peace plan, there would be no Palestinian capital in East Jerusalem, but in the outskirts of the city. Yet, the plan refers to Jerusalem as “Israel’s undivided capital” and recognizes Israeli sovereignty over some parts of the West Bank.

The plan drew widespread criticism from the Arab world and was rejected by the Organization of Islamic Cooperation (OIC), which urged "all member states not to engage with this plan or to cooperate with the U.S. administration in implementing it in any form."

Israeli Prime Minister Benjamin Netanyahu vowed on May 17 to annex Jewish settlements in the West Bank.

"These areas of the country are birthplaces of the Jewish nation. It's time to apply Israeli law over them," Netanyahu told the Knesset, Israel's parliament, adding that "this won't distance peace, it will bring it closer. These settlements will be part of Israel in any scenario".

Israel is expected to carry out the annexation of some parts of the West Bank on July 1, as agreed to between Netanyahu and rival-turned-partner Benny Gantz, who is the leader of the Blue and White alliance. Under the deal, Gantz would take over from Netanyahu as prime minister on November 17, 2021.

Palestinian officials say that under the US plan, Israel would annex 30-40% of the West Bank, including all of East Jerusalem, seen as the capital of a future Palestinian state.

On May 20, Palestinian Prime Minister Mohammad Shtayyeh urged the cabinet to cut relations with the US and Israel. Shtayyeh’s remarks came after an announcement by President Mahmoud Abbas called for terminating all agreements and understandings signed with Israel and the US, including on security. Abbas' statement called for holding the US administration “responsible for the occupation of the Palestinian people and consider it a key partner in Israel's actions and decisions against the rights of the Palestinians”, according to the Palestinian news agency WAFA.

Shtayyeh also called on the countries that have not yet recognized Palestine on the 1967 borders with East Jerusalem as its capital to do so as soon as possible to salvage peace and the two-state solution.

The West Bank and Gaza were captured by Israel during the 1967 Six-Day War. Shortly after the war, Israel began building settlements within the territory which is considered as a violation of international law.