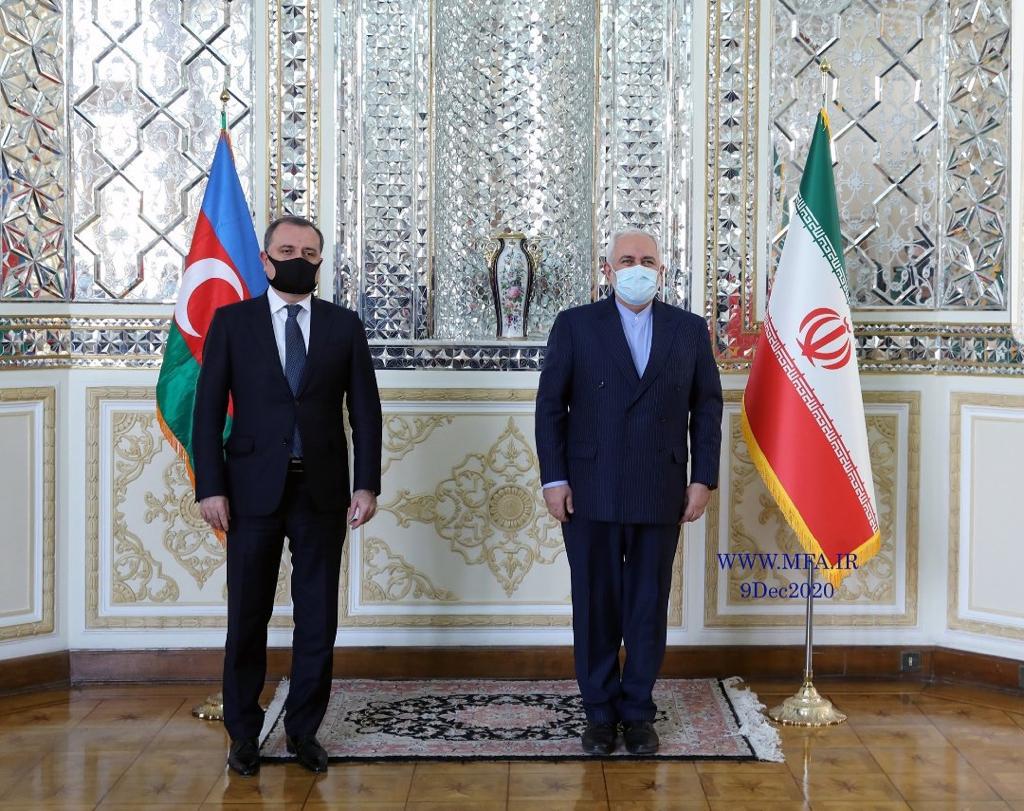 In a meeting with his Azerbaijani counterpart Jeyhun Bayramov on December 9, Iran's Foreign Minister Mohammad Javad Zarif welcomed an agreement to end the Nagorno-Karabakh conflict, as well as the liberation of Azerbaijan’s territories from the Armenian occupation. / Azerbaijan Ministry of Foreign Affairs

Iranian President Hassan Rouhani has expressed satisfaction with the liberation of the occupied territories of Azerbaijan, and declared his country’s readiness to play a role in helping to strengthen the ceasefire between Baku and Yerevan.

In a meeting with Azerbaijan’s Minister of Foreign Affairs Jeyhun Bayramov in Tehran on December 9, Rouhani referred to the clear positions of Iran on the Nagorno-Karabakh conflict, and supported the territorial integrity of Azerbaijan, according to the official website of the Iranian president.

The president also stated Iran’s readiness to participate in the reconstruction of the liberated areas of Azerbaijan after a 44-day war, saying that "considering the neighborhood of the two countries and the facilities available in Iran, Iran's presence and participation in the reconstruction of the areas affected by the Nagorno-Karabakh war will benefit both countries".

The latest outbreak of war in Azerbaijan's Karabakh region started on September 27 after Armenia's forces deployed in the occupied Azerbaijani lands shelled military positions and civilian settlements of Azerbaijan. Non-stop artillery attacks prompted counter-offensive measures by the Azerbaijani forces. As a result, Azerbaijani army liberated over 300 settlements, including five cities - Jabrayil, Fuzuli, Zangilan, Gubadli, and Shusha, from Armenia's occupation. Hostilities ended on November 10 after a trilateral ceasefire agreement was signed by Azerbaijan, Armenia and Russia. Under the deal, Armenia returned the occupied districts of Aghdam, Kalbajar and Lachin to Azerbaijan by December 1.

Armenia and Azerbaijan have been locked into a decades-old conflict over the Nagorno-Karabakh region, which is an internationally recognized territory of Azerbaijan. Following the Soviet Union’s dissolution in 1991, Armenia launched a military campaign against Azerbaijan that lasted until a ceasefire deal was reached in 1994. Armenia occupied 20 percent of Azerbaijan’s internationally recognized territories including the Nagorno-Karabakh (Daghlig Garabagh) region and seven surrounding districts. Over 30,000 ethnic Azerbaijanis were killed and one million were expelled from those lands in a brutal ethnic cleansing policy conducted by Armenia.

During the meeting, Rouhani referred to previous agreements between Iran and Azerbaijan, including the Rasht-Astara railway project, and said that "conditions are ripe for the implementation of joint cooperation projects agreed between the two countries, including Khoda-Afarin Dam and the construction of the power plant, and the two countries can further develop their cooperation in the fields of industry, science, pharmacy and other sectors."

Khoda-Afarin Dam (also spelled as Khudafarin Dam) which is an earth-fill embankment dam on the Araz River, is located 8 kilometers (5.0 mi) west of Khomarlu in the East Azerbaijan Province, Iran and 14 kilometers (8.7 mi) southwest of Soltanlı in Jabrayil District, Azerbaijan. Armenia occupied the area in 1993, during the First Nagorno-Karabakh War, but on 18 October 2020, the Azerbaijani forces retook control of the dam. The dam's purpose is a hydroelectric power generation and irrigation.

For his turn, the Azerbaijani Foreign Minister pointed out the liberation of the occupied territories and the revival of the 132-kilometer border with Iran, saying that "Azerbaijan's borders with Iran are a border of friendship and development, and we believe that the restoration of these borders can lead to new cooperation projects".

The construction and commissioning of the Astara (Iran) - Astara (Azerbaijan) railway have enabled more products to be exported. The Rasht-Astara railway will be an extension of the Qazvin-Rasht railway, which is a segment of the International North-South Transport Corridor which originates in India and passes through Iran, Azerbaijan and extends to Russia and the Gulf of Finland. The foundation of the corridor was laid on September 12, 2000, based on an intergovernmental agreement signed between Russia, Iran and India. Azerbaijan joined this agreement in 2005.

Some reports claim that the construction of the 130km Rasht-Astara railway should be complete by 2021, while other sources suggested around 2023 and yet others hinted that no physical construction had yet commenced.

During his official visit, Bayramov also met his Iranian counterpart Mohammad Javad Zarif and the Secretary of the Supreme National Security Council Ali Shamkhani, and discussed a number of regional and international issues including the expansion of bilateral relations, the Caspian Sea, border cooperation, ongoing projects and the joint economic commission.