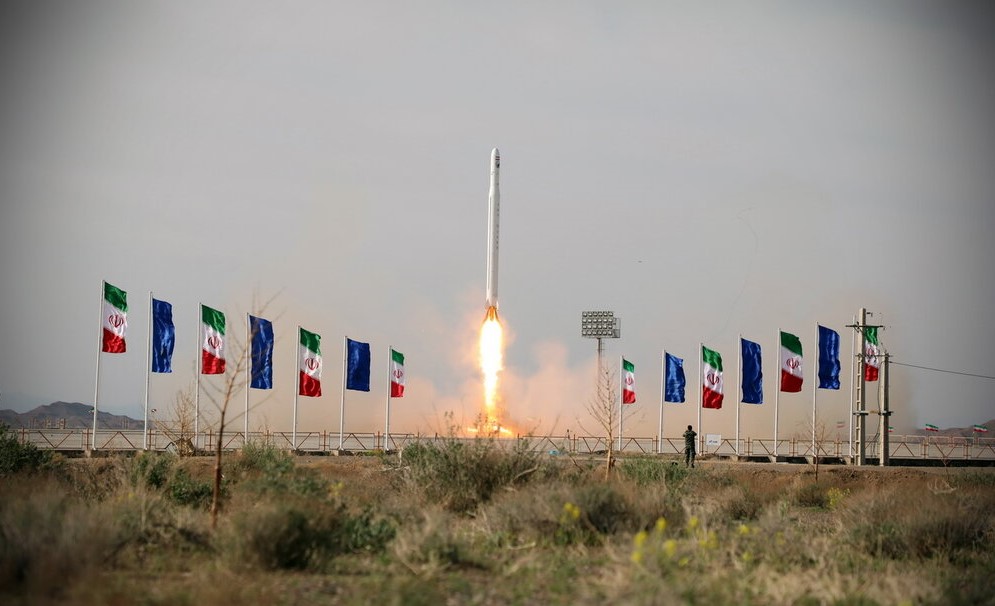 Islamic Revolutionary Guards Corps launched Iran's first military satellite Noor-1 by the domestically-built launcher Qassed on April 22, 2020, and placed it into the orbit at an altitude of 425km. / MEHR News Agency

Iran’s Foreign Ministry Spokesman Seyyed Abbas Mousavi has criticized recent statements by the US, Germany, and France on the launch of a military satellite into space, calling them Washington’s interference in the country’s internal affairs.

On April 22, Islamic Revolutionary Guards Corps (IRGC) launched Iran's first military satellite, dubbed Noor-1, by the domestically-built launcher Qassed (translated as "messenger" in Persian) and placed it into the orbit at an altitude of 425 km, according to Tasnim news agency.

“No UN Security Council resolution prohibits Iran from launching a satellite into space, and the U.S. reference to Resolution 2231 is definitely irrelevant and contrary to the facts,” the Iranian spokesman Mousavi said, adding that “interestingly, the Resolution 2231 is a resolution that the U.S. regime has violated by withdrawing from the Joint Comprehensive Plan of Action [JCPOA, the 2015 Iranian nuclear deal], and continues to openly pressure other independent states to violate it”.

Following the satellite's launch, U.S. Secretary of State Mike Pompeo said Iran should be held accountable for the launch of a military satellite, and referred to U.N. Security Council resolution 2231.

“Every nation has an obligation to go to the United Nations and evaluate whether this missile launch was consistent with that Security Council resolution,” Pompeo told reporters on Wednesday.

The U.N. resolution that was adopted in 2015, calls Iran to refrain for up to eight years from work on ballistic missiles designed to be capable of delivering nuclear weapons after the JCPOA, an agreement that was signed between Tehran and with six world powers to limit the Caspian country's nuclear program.

“The Iranian ballistics program is a major concern for regional and international security. It contributes to the destabilization of the region and the rise in tensions,” France said in a statement.

Mousavi said Germany's expression of concern over the launch of a satellite designed by Iranian engineers comes as the German defense minister has publicized his decision to buy a fighter jet capable of carrying a nuclear bomb.

In response to the statements of the U.S., France, and Germany, Iran’s Foreign Minister Zarif said that “Iran neither has nukes nor missiles designed to be capable of carrying such horrific arms”.

However, Russia, a permanent member of the UNSC, took Iran’s side in the light of the issue. Russian Foreign Ministry spokeswoman, Maria Zakharova, on April 23 dismissed the U.S. claim that Iran has violated resolution 2231 and accused Washington of being in violation of the nuclear deal.

She maintained that Tehran has had not engaged in producing nuclear weapons or manufacturing missiles capable of carrying nuclear warheads.

In a phone conversation with the Commander-in-Chief of the IRGC, Major General Hossein Salami on Friday, Iranian President Hassan Rouhani described the launch of the defense satellite into space as a “valuable national success”.