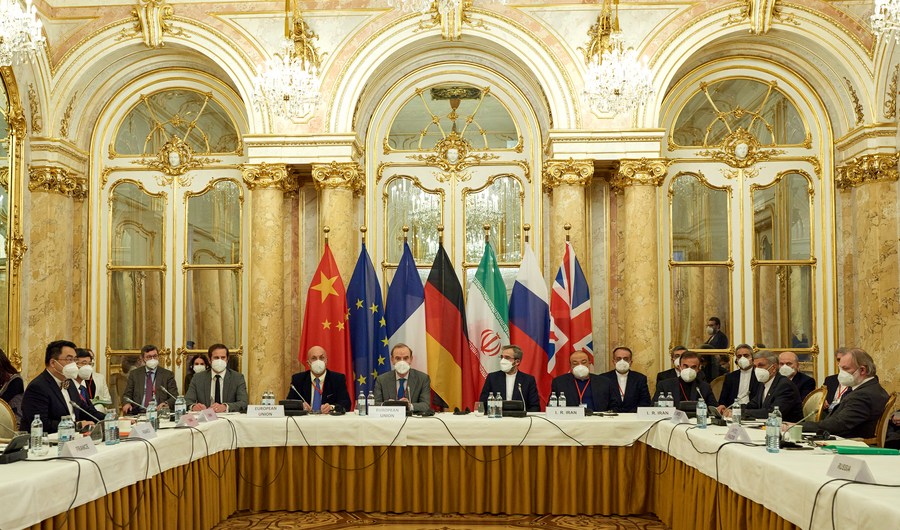 This photo was taken on November 29, 2021, during a meeting of the Joint Commission on the Joint Comprehensive Plan of Action (JCPOA), in the Austrian capital, Vienna. / Xinhua News Agency

“Not surprising. Dialogue is always despised by the regime whose genesis is based on war, tension and terror. Delegates in Vienna won’t take instruction from Beit Aghion [the official residence of the Israeli Prime Minister],” he added.

His remarks came in response to Bennett’s call, who urged the United States on December 2 to immediately call off the seventh round of indirect negotiations with Iran over its nuclear program. In a phone call with US Secretary of State Antony Blinken, Bennett said there must be an “immediate cessation of negotiations” in response to Iran’s use of “nuclear blackmail” as a negotiation tactic.

Bennett also cited a recent report from the International Atomic Energy Agency (IAEA), which said Iran had rationalized its uranium enrichment process to 20 percent purity with advanced equipment at its underground facility in Fordow, in serious violation of the 2015 nuclear deal.

According to Mohammad Reza Ghaebi, Iran’s envoy to the IAEA, “Iran has allowed the IAEA to enhance its verification activities at the site.” Ghaebi believes the IAEA’s report is a regular technical account of Iran’s nuclear activities compiled based on information provided by Iran.

Meanwhile, Israeli Defense Minister Benny Gantz plans to visit Washington next week to meet with his US counterpart, Defense Secretary Lloyd Austin. In an interview with Israeli media, Gantz expressed his confidence that US President Joe Biden will fulfill his promise not to allow Iran to obtain nuclear weapons. At the same time, the Israeli official stressed that “an attack on Iran is an option.”

“I do think we always have to prepare the option for the moment when we may find ourselves alone. I say again, an attack (on Iran) is an option. It doesn't have to be the first one,” Gantz said.

Iran and the P4+1 (Britain, France, Germany, Russia, and China) resumed talks in the Austrian capital of Vienna on November 29 after six rounds of talks held earlier this year. The US is indirectly involved in the negotiations, aiming to revive the JCPOA, which set restrictions on Iran’s nuclear program in exchange for sanctions relief.

If Tehran resumes compliance under the deal, the Biden administration has sought to re-enter the JCPOA, which President Donald Trump unilaterally exited in May 2018. However, Iran insists that it will only do so if the United States makes the first move and lifts all sanctions. Following the US withdrawal from the JCPOA and the reimposition of sanctions on Iran, Tehran scaled back its commitments and expanded its nuclear program.

In a phone conversation with EU Foreign Policy Chief Josep Borrell on December 3, Iran’s Foreign Minister Hossein Amir-Abollahian called on the West to offer an “actual initiative” rather than “repeating statements against Iranian nation’s interests.”

“Despite America dishonoring its promises, and despite the inaction of the three European countries, we are in Vienna talks with goodwill. Our team has clear, tangible and practical plans and initiatives in each stage. The West should offer an actual initiative for ending the sanctions and stop repeating the previous statements which are in violation of Iranian nation’s rights and interests,” Amir-Abdollahian said, according to a report issued by Iran’s foreign ministry.

For his turn, Borrell called on all parties to be flexible to facilitate reaching an agreement in the talks.

The Iranian chief nuclear negotiator Ali Bagheri Kani said on December 2 that the Iranian delegation had submitted draft proposals outlining Tehran’s position on sanctions relief and nuclear issues. He added that a third document detailing the duration and methods of verifying the lifting of sanctions would be submitted later to the P4+1.