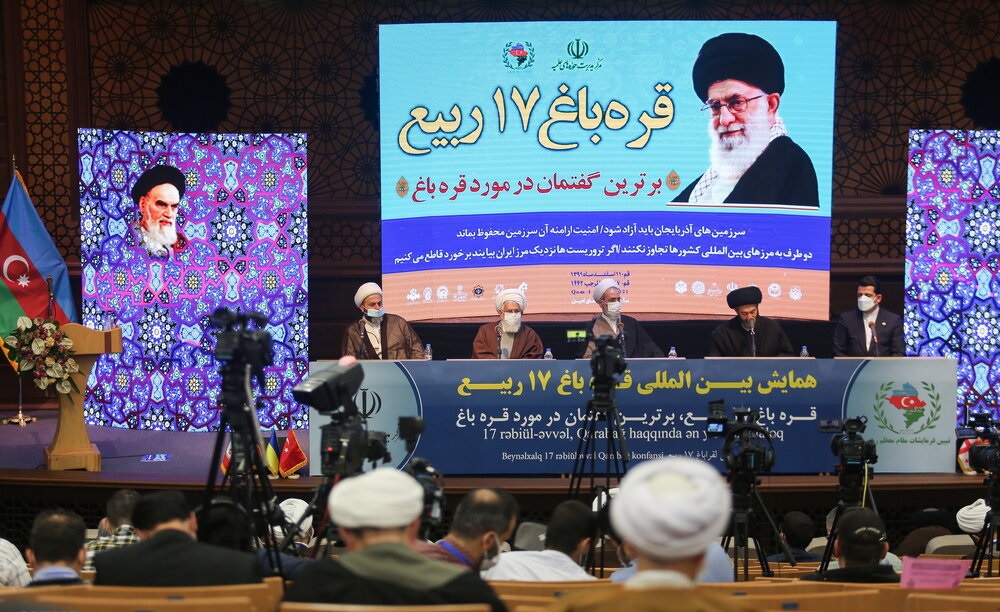 An International Conference about the Nagorno-Karabakh conflict was held in the central city of Qom, Iran, on March 1, 2021. / MEHR News Agency

Iranian top government and religious officials have defended Azerbaijan’s territorial integrity at an international conference dedicated to the Karabakh region of Azerbaijan.

“Iran was opposed to the occupation of Azerbaijan lands and signed an agreement with the Azerbaijani government to build the Khudafarin dam, while the dam was in the occupied lands. The nature of this agreement was to oppose the Armenian invasion in Karabakh," Iran’s Deputy Foreign Minister Abbas Araghchi said while addressing "Karabakh International Conference Rabi' al-Awwal 17" in the presence of senior religious and political figures, domestic and international experts, in the central Iranian city of Qom, on March 1.

He added that Tehran's close relations with Baku has "created good capacities for an extensive relationship".

Mohsen Rezaei, the Secretary of Expediency Council (the top legislation vetting body of Iran) said during the meeting that “Iran insists on full liberation of Nagorno-Karabakh,” adding that “the whole of Nagorno-Karabakh must be liberated, and there should not be any military forces of other countries [besides Azerbaijan]”.

Ayatollah Ja’far Sobhani, Iranian top cleric, a senior member of the Council of Mujtahids in the Seminary of Qom and Director of the Imam Sadiq Institute, said in a letter sent to the conference that “the Nagorno-Karabakh region has long belonged to the territory of Azerbaijan, and its occupation was illegitimate."

For his turn, Azerbaijan’s Ambassador to Iran Bunyad Huseynov said that “Azerbaijani people have not forgotten the support of Iran,” and added that there will be cooperation for the reconstruction of the Karabakh region between Azerbaijan and Iran.

“Legally, and religiously speaking, the act of the government and people of the Republic of Azerbaijan in terms of liberating their territories was completely legitimate and it was in line with the four UN Security Council resolutions,” the statement issued by Iranian seminary scholars said at the end of the Karabakh conference.

Armenia and Azerbaijan were locked into a decades-old conflict over the Nagorno-Karabakh (Daghlig Garabagh) region, which is an internationally recognized territory of Azerbaijan. Following the Soviet Union’s dissolution in 1991, Armenia launched a military campaign against Azerbaijan that lasted until a ceasefire deal was reached in 1994. By that time, Armenia occupied 20 percent of Azerbaijan’s internationally recognized territories including the Nagorno-Karabakh region and seven surrounding districts. Over 30,000 ethnic Azerbaijanis were killed and one million were expelled from those lands in a brutal ethnic cleansing policy carried out by Armenia.

The latest war in the region broke out on September 27 last year after Armenia's forces deployed in the occupied Azerbaijani lands shelled military positions and civilian settlements of Azerbaijan. Non-stop artillery attacks prompted counter-offensive measures by the Azerbaijani forces. As a result, the Azerbaijani army liberated over 300 settlements, including five cities, from the Armenian occupation. Hostilities ended on November 10 after a trilateral ceasefire agreement was signed by Azerbaijan, Armenia and Russia. Under the deal, Armenia returned the occupied districts of Aghdam, Kalbajar and Lachin to Azerbaijan by December 1. Currently, a Russian contingent of 1,960 peacekeepers oversees the peace and adherence to the ceasefire agreement in Azerbaijan’s Nagorno-Karabakh region and the 5km-wide Lachin corridor.

During the recent war, Iran’s Supreme Leader Ali Khamenei and President Hassan Rouhani reiterated their support for the territorial integrity of Azerbaijan, saying that all Azerbaijani territories under Armenian occupation must be “liberated and returned to Azerbaijan”.

Meanwhile, on March 1, the Iranian Embassy in Baku denied claims shared by some media outlets, which reported that during the recent Karabakh War, Iran had transmitted information about the Azerbaijani Army to Armenia and supplied Yerevan with weapons and fuel.

The embassy underlined that "this mischievous news quoted by a third country source, which is engaged in a kind of propaganda confrontation with Iran, was completely false and we deny this news," the Iranian state news agency IRNA reported.

The statement said that the Iranian Supreme Leader and high-ranking officials "openly support the position of the Republic of Azerbaijan and condemn the occupation."