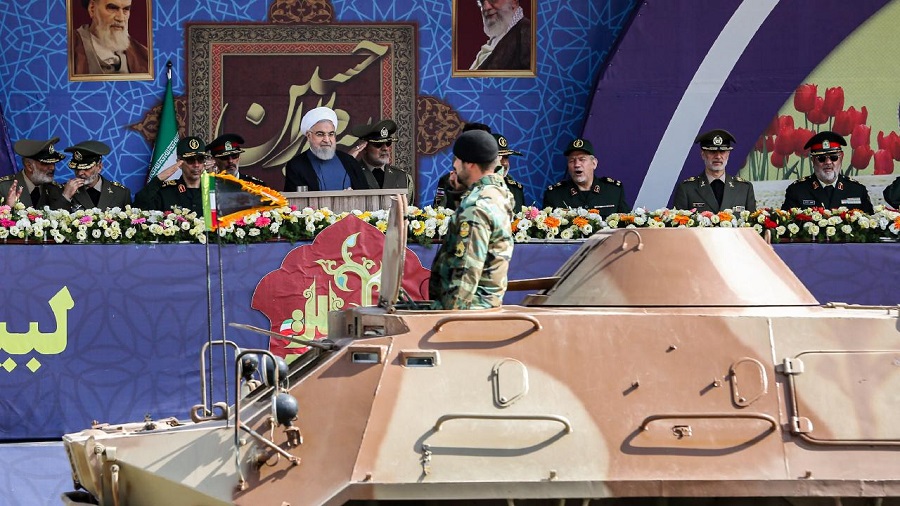 A one-day event that took place in Tehran at an area next to the mausoleum of the founder of Iran’s Islamic Republic, Ayatollah Ruhollah Khomeini, showcased Iran’s latest military developments, including nearly 20 missiles designed for various purposes. / PerthNow

Iran's President Hassan Rouhani presided over a major military parade Sunday, days after Saudi Arabia accused Iran of being behind the recent attacks on Saudi oilfields.

A one-day event that took place in Tehran at an area next to the mausoleum of the founder of Iran’s Islamic Republic, Ayatollah Ruhollah Khomeini, showcased Iran’s latest military developments, including nearly 20 missiles designed for various purposes.

According to government data, the system can trace targets, including fighter jets and enemy drones, 150 km away and intercept them at a range of 120 km. It can also trace stealth targets at a distance of 85 km and destroy them at a distance of 45 km. The missile defense system can also trace, engage and destroy six targets simultaneously, having high mobility and can be prepared for operation in less than five minutes.

As part of Sunday’s parade, Iran also showcased its Bavar-373 long-range road-mobile surface-to-air missile system that could potentially rival the S-300 made by Russia. Designed by the Iranian Defense Ministry in cooperation with unspecified local manufacturers and universities, the system was formally unveiled in August. The Bavar-373 uses a vertical launch system and a long-range, phased array fire-control radar called Meraj-4. It can reportedly detect up to 100 targets, tracking 60 of them, and engage six concurrently.

At the same time, a similar event took place in the southern province of Hormozgan and the territorial waters in the Persian Gulf on Sunday.

The parades were part of the celebrations of the 31st anniversary of the ending of the Iran-Iraq War, an eight-year conflict that pitted Saddam Hussein’s forces against those of a then-newly established Islamic Republic of Iran, shortly after the overthrow of the shah in 1979.

Meanwhile, the event comes at a time of rising tension between Iran and United States.

On September 14, drones were used to attack the state-owned Saudi Aramco oil processing facilities at Abqaiq and Khurais in eastern Saudi Arabia. The attack caused large fires at the refineries and some destabilization of global oil market. Washington and Riyadh have blamed Iran for being behind the attacks, while Iran has refuted all allegations. In response to the incident, U.S. officials announced the government’s intent to send American troops to bolster Saudi Arabia’s air and missile defenses.

While addressing the parade on Sunday, President Rouhani has condemned the United States’ presence in the region.

“Foreign forces can cause problems and insecurity for our people and for our region,” he said, according to a report by Arab News. “If they’re sincere, then they should not make our region the site of an arms race. Their presence has always brought pain and misery [...] the farther they keep themselves from our region and our nations, the more security there will be.”

Meanwhile, military officials from Iran have previously announced plans to hold massive military drills together with China and Russia. The drills are said to take place in the Oman Sea and the Indian Ocean, but the date for the events has not been made public.

“We have [previously] conducted joint exercises with other countries, and now, for the first time after the victory of the Islamic Revolution, we will conduct joint naval exercises in the northern Indian Ocean and the Oman Sea together with Russia and China, as the three main world powers,” said Gadir Nizami, who heads the Department of the General Staff at the Iran’s Armed Forces, in an interview with Fars news agency.

He said maneuvers will take place within international waters and will not include the Persian Gulf.