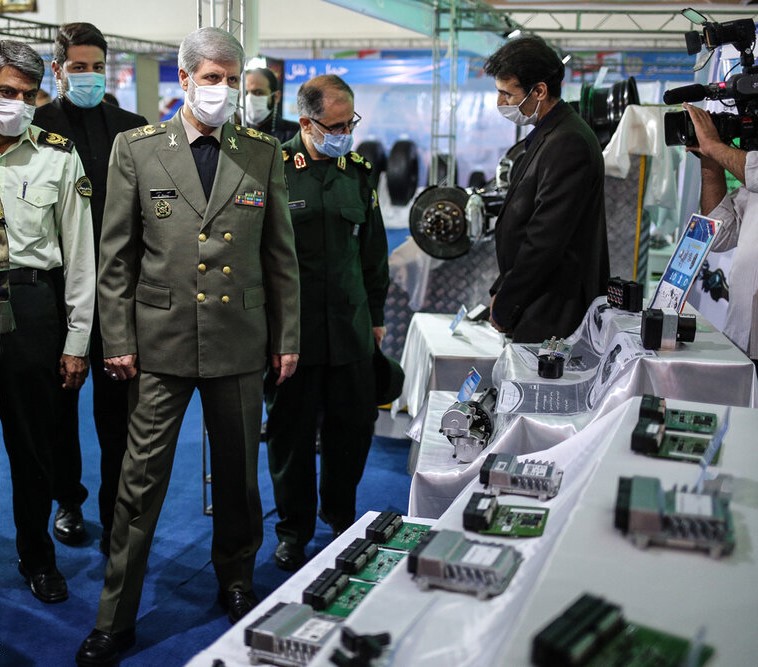 Iran's defense ministry held an exhibition showcasing domestically manufactured industrial parts that can be used across various industries such as aviation, aerospace, marine, helicopter, communication and radar systems, as well as ground combat equipment. The exhibition took place in the capital of Tehran on September 3, Iran’s Mehr news agency reported.

“The Ministry of Defense is capable of producing various complex and sensitive parts that are sanctioned by foreign countries,” Iranian Minister of Defense Brigadier General Amir Hatami said at the venue.

He said that Iran will not allow its enemies to curb its production of military equipment by imposing economic sanctions on Iranian companies.

Hatami said that cooperation between the private sector and knowledge-based firms working with the ministry has proven that Iran is self-reliant and currently capable of manufacturing over 38,000 military gear parts and equipment without the help of other countries.

Speaking on the sidelines of the exhibition, Admiral Amir Rastegari who heads Iran's Marine Industries Organization said that long-range vertical-launch cruise missiles will be mounted on Iran's navy destroyers.

He added that Iran was well-positioned to export various types of military and non-military part, worth billions of dollars, to other countries.

On September 2, Iran’s Air Defense Force unveiled the mobile radar system “Kashef-99” which is capable of detecting small flying objects, as well as 27 other industrial achievements. The domestically-manufactured device is a 3D phased-array radar system that can be mounted on a vehicle and detect 300 targets simultaneously within a range of 12 kilometers.

According to Brigadier General Alireza Sabahifard, an Army Air Defense Force commander, Iran has the ability to identify and destroy any drones in its airspace.

The “Emad” system can simulate war games and be used in all areas of defense, he added. "It has very advanced software and hardware and has the ability to be upgraded."

Iran's defense forces heavily rely on foreign weapons because of their limited ability to produce them domestically. An international arms embargo, which was imposed by the United Nations Security Council in 2007, has significantly weakened Iran's military capabilities.

However, a nuclear deal signed between Iran and world powers in 2015 paved the way for UNSC Resolution 2231, which stipulated that the arms embargo would end on October 18, 2020. Recent attempts by the United States to convince UN Security Council members to extend the embargo have failed.