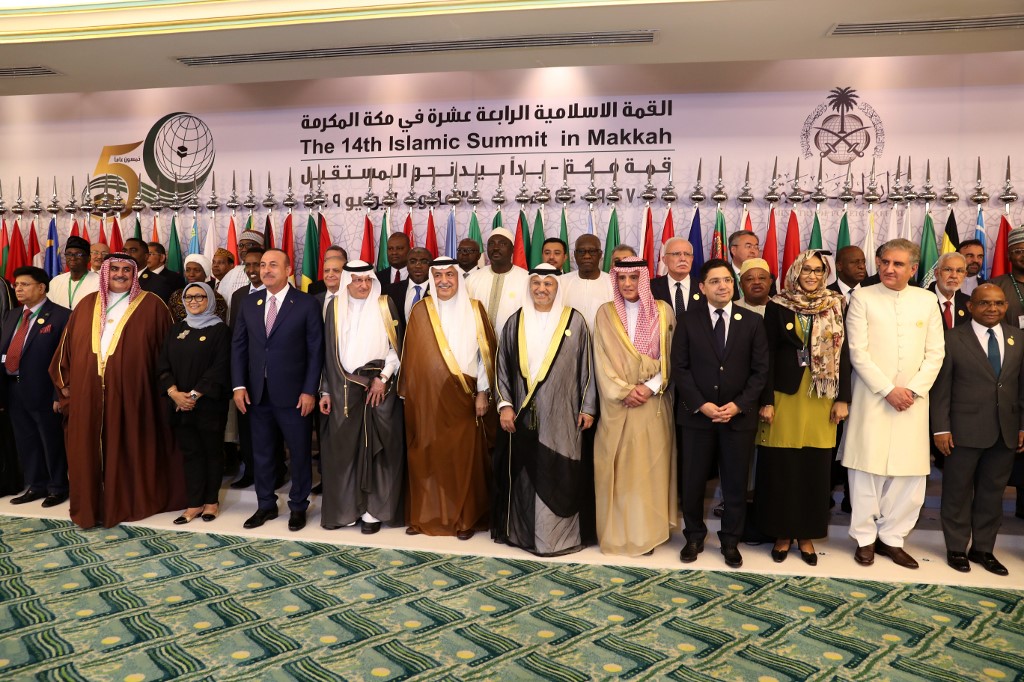 Arab and Islamic states foreign ministers pose for a family picture during a meeting of the Organisation of Islamic Cooperation (OIC) and Arab League member states' top diplomats in Jeddah on May 30, 2019, ahead of the Gulf, Arab, and Islamic summits to be held in the holy city of Mecca on May 30 and 31, 2019. / Bandar Aldani / AFP

Shi’ite-dominated Iran and Sunni-dominated Saudi Arabia are typically at the opposite sides of the spectrum in the Middle East when it comes to Islam and their influence over holy shrines. But lately, their disagreements have been of a different kind, as a battle for influence and allies throughout the region is being waged in the diplomatic sphere.

“We consider Saudi Arabia’s attempt to rally neighboring and Arab countries [against Iran] as the continuation of a futile process that the United States and the Zionist regime are pursuing against the Islamic Republic,” Iran’s Foreign Ministry Spokesman Abbas Mousavi said in a statement published on May 31.

Mousavi’s words came as Saudi Arabia called on regional states to show support as a result of drone attacks on two Saudi oil tankers that were vandalized on May 12 while crossing the Gulf near the UAE’s territorial waters about 113 kilometers (70 miles) from the Strait of Hormuz, a vital waterway for international oil shipments. An additional two ships were attacked off the coast of the emirate of Fujairah in the UAE.

Responsibility for the attacks was claimed by Iranian-backed Houthi rebels from Yemen, which has been battling a Saudi-led military coalition, which receives support from the United States and the United Kingdom, in Yemen for four years.

Two emergency meetings – one by the Gulf Cooperation Council (GCC) and another by the Arab League – were held in Mecca, Saudi Arabia, on May 30 to address the attacks, which Saudi Arabia blames on Iran-backed groups.

“The summit hosted by Saudi Arabia followed the wrong strategy of creating discord among regional and Muslim countries, which is what the Israeli regime wants,” Mousavi said. “Such hostile statements do not reflect the views of all members taking part at the meeting,” the official website of the foreign ministry reported.

A third meeting, the Organization of Islamic Cooperation’s summit, took place in Mecca on Friday.

At the summits in Mecca, regional leaders, “condemned the conduct of Iran against the principles of good neighborliness, which threatens security and stability in the region” in a final communique delivered by Secretary General of the Arab League Ahmed Aboul Gheit. The communique criticized what it described as an attack by the Iranian-backed Houthi militias, which Saudi Arabia views as terrorists, on two oil pumping stations in the kingdom and a separate attack on commercial vessels in the territorial waters of the UAE.

The GCC consists of Bahrain, Kuwait, Oman, Qatar, Saudi Arabia and the UAE. The Arab League consists of those six countries plus additional Arab-dominated states that stretch from northwest Africa to Somalia and the Middle East.

"The Iranian regime's interference in the internal affairs of the countries of the region, development of nuclear and missile programs, and its threats to freedom of international shipping are a threat to global oil supply," Saudi Arabia’s King Salman said during the summit.

Iran has not been the only country concerned over the outcome of the summits. The foreign minister of Qatar also criticized the statements that were critical of Iran.

"The statements condemned Iran but did not refer to a moderate policy to speak with Tehran," Sheikh Mohammed bin Abdulrahman Al Thani told Al Jazeera, saying the meetings “adopted Washington's policy towards Iran and not one that takes the neighborhood into consideration.”

U.S. Secretary of State Mike Pompeo, who had canceled a planned visit to Moscow to meet with European leaders in Brussels to discuss Iran, called the attacks, “efforts by Iranians to raise the price of crude oil around the world,” according to Reuters.

On the same day, U.S. national security adviser John Bolton said that evidence of Iran being behind the tanker attacks would be presented to the U.N. Security Council as early as next week.

"I don’t think anybody who is familiar with the situation in the region, whether they have examined the evidence or not, has come to any conclusion other than that these attacks were carried out by Iran or their surrogates," he said, according to Channel News Asia.

The recent events come as tensions between Iran and the United States have ratcheted up in recent weeks. The Trump administration had authorized the deployment of 1,500 U.S. troops, an aircraft carrier, and B-52 bombers to the region in a move that American officials said was made to counter alleged threats by Iran to U.S. troops in the region.

In March 2015, Saudi Arabia along with its regional allies launched a military operation in Yemen to restore Yemen’s former president, Abd-Rabbu Mansour Hadi. The U.S. and Saudi Arabia describe the Houthis as Iranian proxies and accuse them of seeking to overthrow the government of Yemen and bring it under Iranian influence.

Gulf states have a joint defense force under the umbrella of the GCC, but the alliance has been fractured by a boycott imposed on Qatar by Saudi Arabia, the UAE, Bahrain and Egypt since mid-2017.