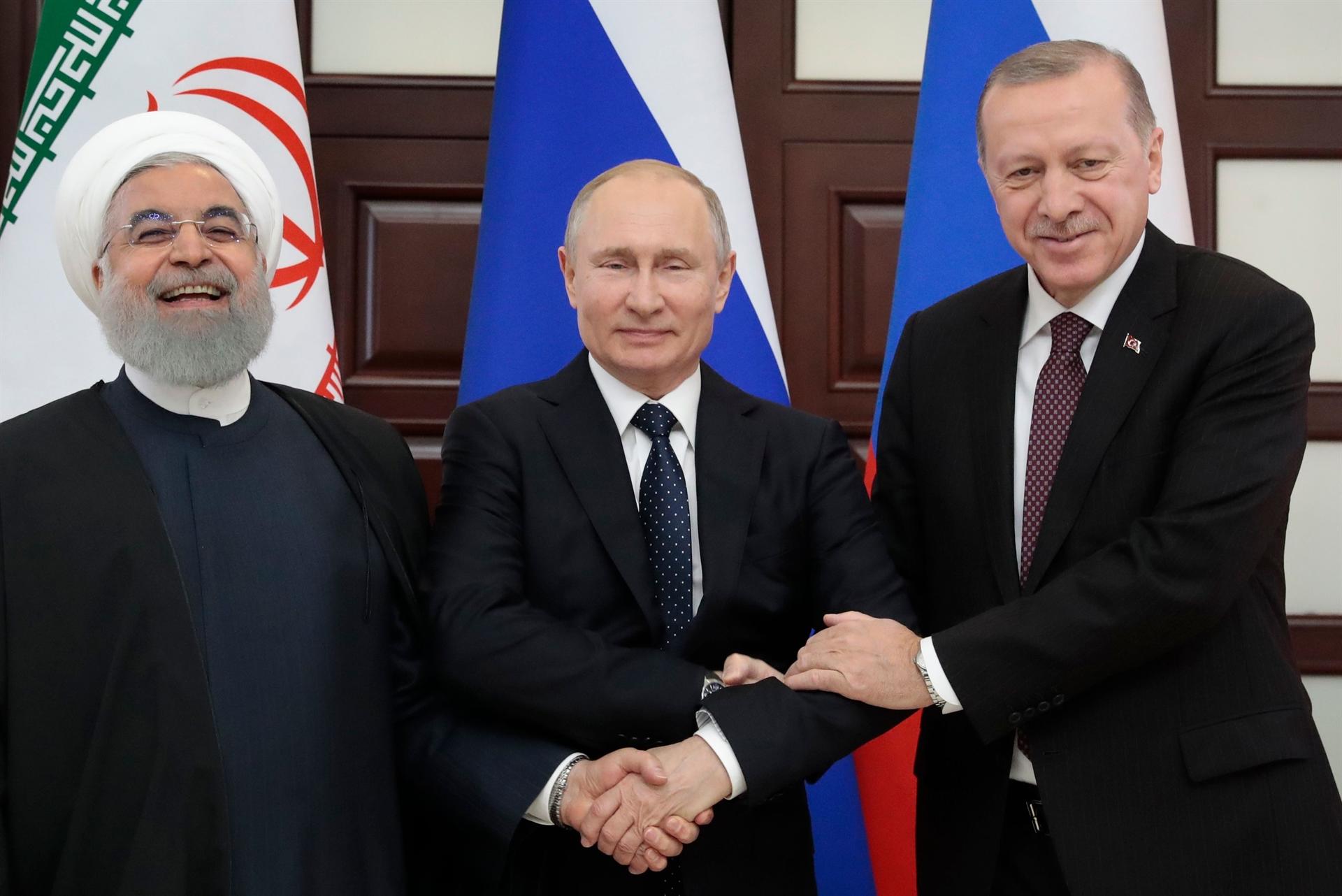 Hosting his Turkish and Iranian counterparts in the Russian Black Sea city of Sochi on Thursday, Russian President Vladimir Putin emphasized that the three leaders support the planned American pullout from northeastern Syria.

The leaders of Iran, Russia and Turkey welcomed the United States’ planned withdrawal from Syria during recent talks that were aimed at finding a political solution to Syria's ongoing, eight-year civil war.

Hosting his Turkish and Iranian counterparts in the Russian Black Sea city of Sochi on Thursday, Russian President Vladimir Putin emphasized that the three leaders support the planned American pullout from northeastern Syria.

“It is our joint view that the (U.S. withdrawal) is a positive move that will help stabilize this part of Syria, where legitimate government control should eventually be restored,” EaDaily quoted Putin as saying at a press conference following a trilateral meeting.

U.S. President Donald Trump’s unexpected announcement in December to pull 2,000 troops out of Syria and declaring victory over the Islamic State (IS), also known as ISIS, came as a big surprise and sparked a wave of different responses – from approval from Syrian and Russian officials, to the resignation of the president's top military advisers, including then-Defense Secretary Jim Mattis. Given the backlash within his own administration, Trump later announced he was slowing down plans to pull all troops out right away.

“Today we state that there are no major changes in the territory (Syria),” Putin said, speaking on the sidelines of Thursday’s meeting. “If that (U.S. troops withdrawal) happens, the only right decision in terms of security would be handing over those territories under the control of the Syrian armed forces.”

“The presence of foreign forces, including American, who are present there without the permission of the Syrian government, should be ended as soon as possible,” Rouhani said according to RIA Novosti. “We have no optimism about what the Americans say,” he added, “but if they do withdraw, it will be very good news.”

Moscow and Tehran have for long backed Syria's President Bashar al-Assad, and officials have emphasized that if the pullout announced by Trump in December happens, the Syrian government must take over the regions where American troops are currently deployed.

But the U.S. pullout has sparked fears that a power vacuum will once again emerge in the region.

Turkish President Recep Tayyip Erdogan said the U.S. pullout should not lead to a power vacuum and reaffirmed Turkey's intention to create a safe zone in north-eastern Syria to secure the Turkish border from the Syrian Kurdish militants that Ankara calls terrorists.

On the sidelines of Thursday’s summit, the trio agreed on the need to take further steps to stabilize the situation in Idlib province in northwestern Syria which is under the control of the Syrian rebels. Although Russia, one of the Syrian government's closest allies, and Turkey are on opposite sides in the Syria conflict, the parties inked a de-escalation deal regarding Idlib in September that averted a Syrian army offensive on the area in which three million civilians live amongst members of rebel and terrorist groups.

“The Iranian and Turkish colleagues are ready to work together in order to finally relieve tensions and stabilize the situation in Idlib,” noted Putin.

Both Russia and Iran have supported the government of Syria’s President Bashar Al Assad, who has been waging a civil war since the spring of 2011. The country is also the site of a prolonged proxy war between rebel and terrorist groups, which has resulted in the displacement of more than half of the Syrian people within the country or around the globe and seeking refugee status.