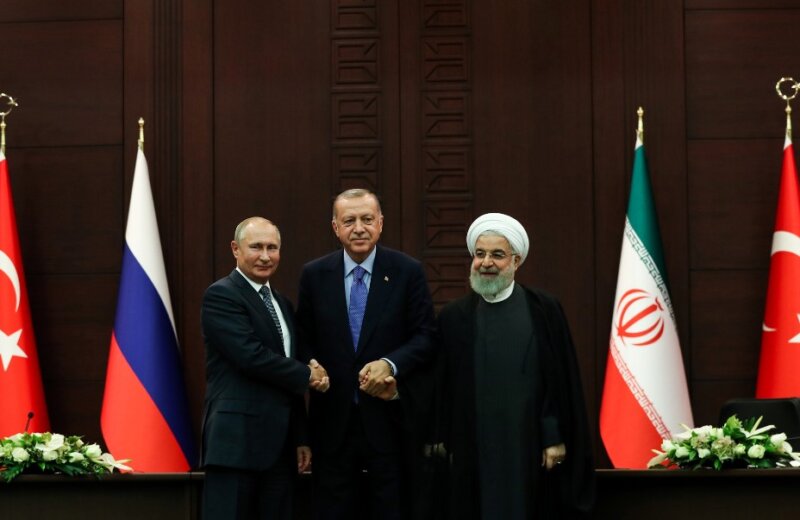 The presidents of Iran, Russia and Turkey have reaffirmed their commitment to the sovereignty and territorial integrity of Syria in a joint statement. The 14-paragraph statement was released after intensive talks by Presidents Hassan Rouhani, Vladimir Putin and Recep Tayyip Erdogan had met on Monday in Ankara to attend a trilateral summit.

It was the fifth trilateral summit of its kind concerned with Syria, following what has come to be known as the Astana format, based on a process launched in 2017 in Kazakhstan's capital, which brings all parties to the conflict together to resolve what has been ongoing since 2011.

The leaders of the three countries welcomed the participation of Iraq and Lebanon as new observers of the Astana format and called on the international community to take more responsibility in rebuilding Syria and increasing humanitarian aid.

In the statement, the three presidents reiterated that there is no military solution to the crisis and that the only solution will be through a political process led and implemented by the Syrians themselves, supported by the UN, and according to Security Council Resolution No. 2254.

The statement called for continuing cooperation in a way that serves the goal of fully eradicating Daesh, also known as ISIS or IS, Jabhat al-Nusra, and all persons, groups and other organizations that are affiliated with al-Qaeda. They also agreed to take tangible measures to guarantee the protection of civilian locals according to the provisions of international humanitarian law.

Criticism of the United States was not spared. The statement condemned the Trump Administration’s decision to recognize the Golan Heights as Israeli territory, saying that in addition to violating international law it also threatens regional peace and security.

“The illegitimate presence of U.S. troops on the Syrian soil jeopardizes its territorial integrity and national sovereignty as an independent UN member state,” President Rouhani demanded that the United States withdraw its troops from the northeast of the country.

Against the advice of his top aides and commanders, U.S. President Donald Trump said last year he would withdraw U.S. troops from Syria. The move was welcomed by Turkey and Iran but has yet to be fully implemented.

Turkish and American forces launched joint land patrols in northern Syria as part of a safe zone at the east of Euphrates river on September 12, according to Hurriyet Daily News.

On August 7, Turkish and U.S. military officials agreed to set up a safe zone in northern Syria and develop a peace corridor to facilitate the movement of displaced Syrians who want to return home. They also agreed to establish a joint operations center. Turkey has insisted that the zone be cleared of the Kurdish rebel groups that pose a threat to the country.

Tens of thousands of Syrian refugees are now gathered near the Turkish border as they try to escape fighting to the south. Turkey, which already hosts 3.6 million Syrians, fears further fighting could create a fresh wave of refugees as well as an influx of fighters.

Russia and Iran have supported Syrian President Bashar al-Assad against the rebels, but Turkey, along with the United States, and European and Arab allies, has supported different opposition factions.

The next trilateral summit will take place in Tehran.