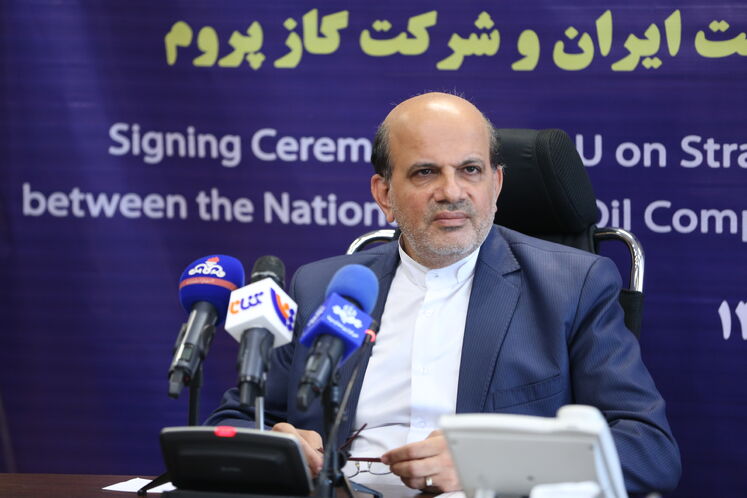 The photo shows the CEO of the National Iranian Oil Company (NIOC) Mohsen Khojastehmehr after signing a memorandum of understanding worth roughly 40 billion dollars, in an online meeting with Vitaly Markelov, Deputy Chairman of the Gazprom Management Committee, on July 19, 2022. / Shana.ir

The National Iranian Oil Company (NIOC) and Russia’s energy giant Gazprom have inked a Memorandum of Understanding (MoU) worth about $40 billion.

The document was signed by NIOC CEO Mohsen Khojastehmehr and Vitaly Markelov, Deputy Chairman of the Gazprom Management Committee, during an online ceremony on July 19.

The signing of the document coincided with the visit of Russian President Vladimir Putin to Tehran on July 19. President Putin arrived in Iran’s capital to attend a summit of the guarantors of the Astana Process on Syria.

After the signing ceremony, Khojastehmehr, who is also a Deputy Oil Minister, said the agreement with Gazprom is one of the biggest foreign direct investment deals in the history of Iran’s oil industry, and added that the “NIOC does not ignore any investment opportunity.”

“Iran and Russia are both keen on bolstering their strategic ties,” he said, adding that the promotion of economic relations and investment in oil and gas fields is emphasized by President Ebrahim Raisi and fully supported by Iran’s Oil Minister Javad Owji.

Khojastehmehr also announced the intent of the NIOC to invest $160 billion in the country’s oil and gas industries. He further said this investment would increase oil and gas production and mean that Iran and Russia are committed to sustainable energy supply. He added that the current worth of Russia’s contracts in Iran’s oil and gas fields is $4 billion.

After the Russian invasion of Ukraine, Russia faced the prospect of being cut off from Europe, its main export market for crude oil. According to the head of the Iranian Oil, Gas and Petrochemical Products Exporters’ Union (OPEX), Seyyed Hamid Hosseini, Russia was trying to take over Iran’s markets by offering higher discounts.

Hosseini pointed to some reports about Russia giving a $30 discount versus Iran’s discount of $20 for customers, adding that “we know Russia-Ukraine war has cut out the route of energy transfers from China to Europe via Russia, which carried 17 shipments per day. Iran can replace Russia in an alternative route from China to Kazakhstan, Turkmenistan, and Turkey.”

In an interview with TASS, Iranian Ambassador to Russia Kazem Jalali said the two countries have been extensively exchanging political and economic delegations since the beginning of 2022. According to him, the two countries’ presidents have had numerous contacts, both personal and over the phone.

Jalali also unveiled Iran’s plans to invest $145 billion in the development of oil production and refining over the next 4-8 years. According to him, “Iran welcomes foreign investors, especially from friendly countries such as Russia, to implement relevant projects.”

“Apart from the development of oil and gas deposits in Iran, the petrochemical industry, being the leading industry, is also ready to attract investments and implement joint projects with Russian companies,” the ambassador added.