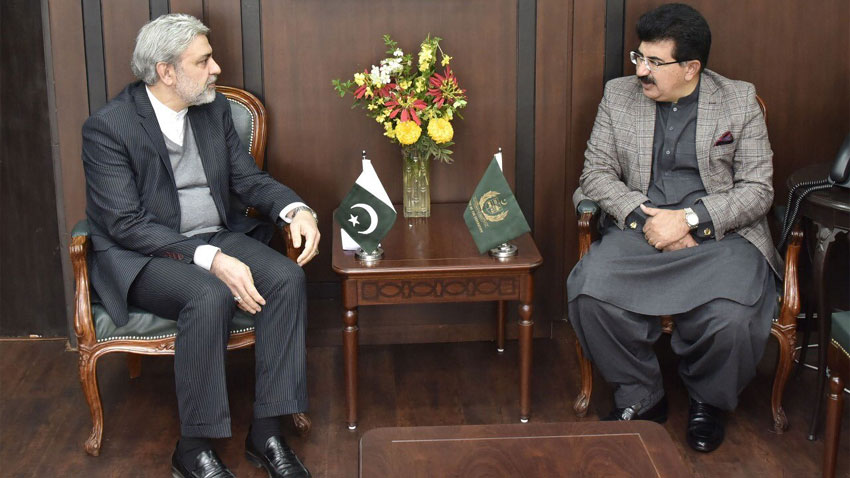 An Iranian envoy has said his country is ready to expand maritime cooperation with Pakistan, including in the spheres of ports and shipping services.

“Iran’s Ministry of Roads and Urban Development and Ports and Maritime Organization are ready to expand cooperation with Pakistani counterparts,” Ambassador of Iran to Pakistan, Mohammad Ali Hosseini said in a meeting with Pakistan’s Minister for Maritime Affairs, Ali Haider Zaidi in Islamabad on March 4, according to the Iranian news agency IRIB.

Hosseini also stressed the need for continued bilateral consultations to enhance economic cooperation, including tourism cooperation, as well as health and religious tourism between the two countries. He called on the both sides to pursue agreements reached between the two states during Pakistan’s Prime Minister Imran Khan’s visit to Iran, including the agreement related to the ports and shipping sector.

The Pakistani minister, in turn, emphasized the need for continued consultations between the two countries to overcome the current situation arising after the coronavirus outbreak.

The two officials discussed the latest traffic conditions for Iranian and Pakistani nationals on the common border and cooperation of the Iranian and Pakistani shipping fleets, and the ways of strengthening border security to effectively tackle the problem of smuggling and regulate border trade.

During his visit, the Iranian ambassador also met the Pakistani Deputy Chairman of the Senate, Saleem Mandviwalla at the Parliament House.

“The recent years have witnessed enhanced cooperation in defense and security areas”, Mandviwalla said, adding that trade potential must be exploited for the mutual benefit of the people of two sides, and both sides need to work on evolving a mechanism to give trade more boost.

The two neighboring Muslim countries have several joint projects, as well as the 2,775-kilometre Iran–Pakistan gas pipeline, known as the Peace Pipeline, which is currently under construction. It is expected to deliver natural gas from Iran to Pakistan.

As of early 2019, the project remains substantially delayed. While the Iranian section of the pipeline has been completed, the Pakistani section remains under construction as it was reportedly postponed due to concerns about the U.S. sanctions. The two countries are also developing two major ports in respective countries, Chabahar Port and Gwadar Port.

Due to the outbreak of the coronavirus in Iran, trade activities between Islamabad and Tehran have been suspended since February 21 because of the border closure.

Iran and Pakistan have been trying to enhance security in common borders in order to confront smugglers and those who create insecurity in border areas. Iranian military forces dispatched along the southeastern border areas are frequently attacked by terrorist groups coming from Afghanistan and Pakistan.

In February 2019, a bus carrying the Islamic Revolutionary Guard Corps’ personnel between the cities of Zahedan and Khash in the Iranian southeastern province of Sistan and Baluchestan bordered with Pakistan, was targeted in a suicide car bomb attack. Twenty-seven IRGC members were killed and 13 others injured in the attack, claimed by the so-called Jaish al-Adl terrorist group.