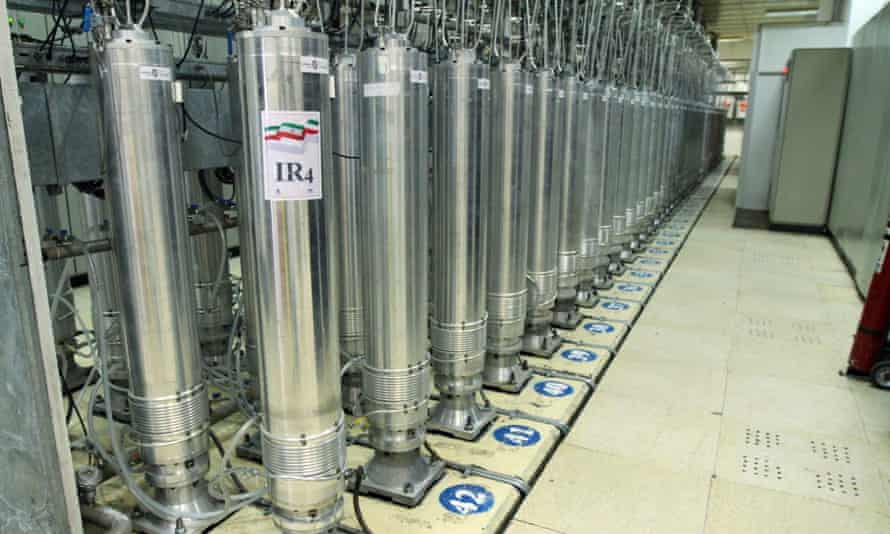 Centrifuge machines at the Natanz nuclear site in the Iranian central province of Isfahan. / EPA

Iranian President Ebrahim Raisi has pledged that Iran "will not retreat a single step from its positions,"' referring to the recent resolution adopted by the International Atomic Energy Agency (IAEA).

"The enemy does not want this country [Iran] to develop a nuclear industry, cutting-edge military industries and advanced car manufacturing," Raisi said while addressing local residents of the city of Shahr-e Kord, in the southwestern province of Chaharmahal-Bakhtiari on June 10.

On 8 June, the Board of Governors of the IAEA adopted a resolution proposed by the United States and the E3 countries (Britain, France and Germany). The E3, which is negotiating with Iran over its nuclear programme, brought forward a resolution at the IAEA criticising Tehran for purported failings in its cooperation with the agency's monitoring and verification efforts. The resolution highlights what it calls Iran's "insufficient substantive cooperation" in clearing up concerns over three undeclared sites.

"Do you imagine that we will retreat just because some resolutions have been issued? In the name of God and in the name of people, Iran will not retreat one step from its positions," the Iranian president said.

He added that the country's "enemies" had been dismayed by the prospect that Iran could take "large steps in the direction of independence and self-sufficiency despite the weight of all these sanctions and threats".

"US-E3 put their shortsighted agenda ahead of IAEA's credibility by pushing a miscalculated & ill-advised Res. against a country w/ the world's most transparent peaceful nuclear program. The initiators are responsible for the consequences. Iran's response is firm and proportionate," the spokesman tweeted.

The Iranian Foreign Ministry alleged that the report was prepared "based on false information provided by the Zionist regime".

Chief of the Atomic Energy Organization of Iran (AEOI) announced on June 9 that Iran has turned off a number of the IAEA cameras that were monitoring its nuclear activities beyond the Safeguards agreement and noted that it plans to turn off the rest soon.

“… we ended the activities of a number of these cameras and we will do the rest tonight and tomorrow,” Mohammad Eslami told the national TV, who put the number of such cameras at 17-18.

The cameras that have been removed or are being removed were installed voluntarily. Their activity fell outside the scope of the Safeguards Agreement of the IAEA. Iran began removing such cameras in response to a resolution by the IAEA Board of Governors against it on June 8.

An informed source told the Iranian Students News Agency on 9 June that "Iran is accelerating the production and installation of new generations of centrifuges including IR-6, IR-4 and IR-2m," as a response to the IAEA resolution.

The IAEA confirmed that Tehran was installing two cascades of advanced IR-6 centrifuges at its underground fuel enrichment plant in Natanz.

Addressing the 35-member Board of Governors after the vote, Iran's acting ambassador to the IAEA Mohammad Reza Ghaebi said it was "meaningless" to ask Iran to cooperate with the agency following the adoption of the resolution.

He added that the board had "delivered a great blow" to the IAEA and proved that the agency's work is "affected by the pressure and goals of some countries".