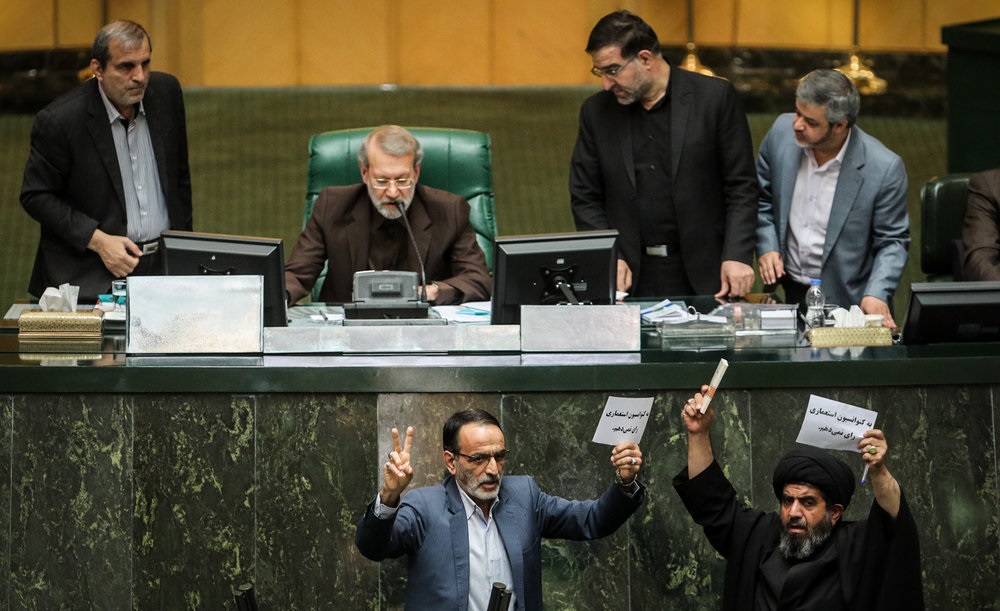 The Iranian parliament has approved a bill on the country’s accession to the International Convention for the Suppression of the Financing of Terrorism set forth by the multinational watchdog known as the Financial Action Task Force (FATF). / Majid Haghdoust / MEHR News Agency

The Iranian parliament has approved a bill on the country’s accession to the International Convention for the Suppression of the Financing of Terrorism set forth by the multinational watchdog known as the Financial Action Task Force (FATF).

“Out of 276 lawmakers present in the meeting, a total of 143 lawmakers voted in favor of the bill while 120 voted against it, and five [Members of Parliament] abstained” Iran’s Mehr news agency reported on Sunday.

The bill will next be submitted to the Iranian Guardian Council, a body of jurists empowered to vet legislation that will either suggest amendments to the text and send it back to the lawmakers for reconsideration, or pass it into law.

The FATF was established by the G7 to monitor money laundering and terrorist financing. The group has declared Iran as a country with a “high risk and non-cooperative jurisdictions,” and advises countries to tell their banks to impose extra due diligence on transactions with Iranians. As a result, most European banks are still wary of doing business with Iran.

In his speech to parliament in favor of the bill, Iran’s Foreign Minister Mohammad Javad Zarif said that he could not give any guarantee that approving FATF-related bills would solve Iran’s problems, but rejecting the bills would allow the United States to take more sanctions against the country. Meanwhile, Iranian Central Bank Governor Abdolnaser Hemmati told Sputnik on October 5 that the new American sanctions will not have a major effect on Iran's financial and oil activity.

"The U.S. government has already done what it wanted. The main work related to the imposition of restrictions, what they do every day, is to hinder Iran’s financial activities and the exports of Iranian oil. In my opinion, after November 6-9, nothing special will happen," Hemmati said, according to Sputnik, referring to when more sanctions kick in.

The Iranian national currency, the rial, enjoyed a rebound from October 1-2, rallying 30 percent against foreign currencies after what has been a months-long freefall. The open market rate of the American dollar, which had jumped up to around 190,000 rials last week, settled as low as 130,000 rials on October 2.

“The EU pledges to continue economic cooperation with Iran, growing oil prices and the latest measures taken by the CB of Iran are believed to be among the main reasons behind the strengthening of the rial,” Farhad Daneshvar, an economic expert and co-founder of AzerInvest Consulting Group, told Caspian News.

“Most economic experts agree that there was a huge bubble in Iran’s money market. Now, the bubble has blown up.”

The rial has lost about 70 percent of its value since May, following U.S. President Donald Trump pulling the U.S. out of the Joint Comprehensive Plan of Action (JCPOA) between Tehran and six world powers. On August 7, Trump imposed the first package of sanctions against Iran since the announcement. This targeted Iran’s automobile sector, trade in gold and precious metals, the purchase of American dollars, and transactions involving its national currency. All remaining sanctions related to the energy sector and oil exports, and transactions by foreign financial institutions with the Central Bank of Iran, will go into effect in November.