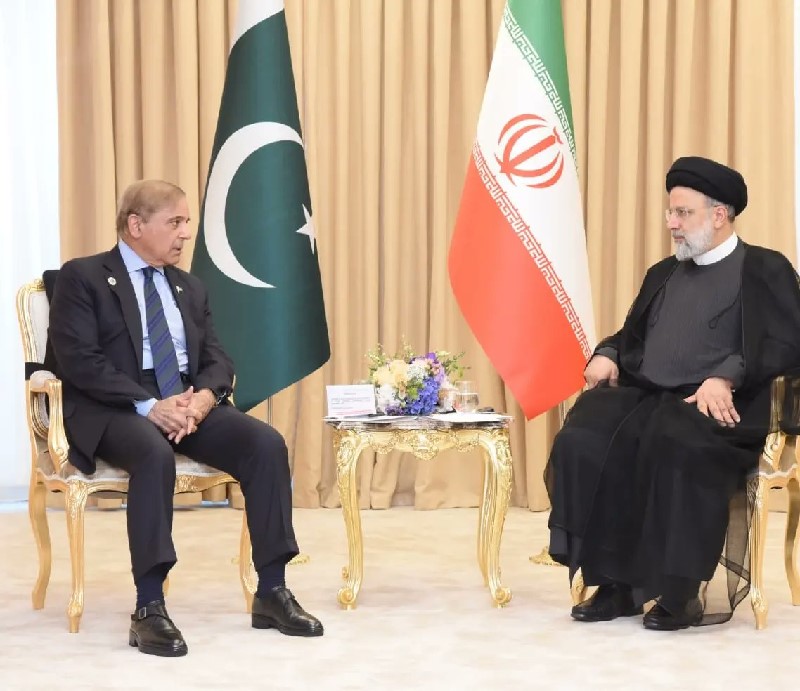 Prime Minister Shehbaz Sharif met with Iranian President Ebrahim Raisi on the sidelines of the annual meeting of the Council of Heads of State of the Shanghai Cooperation Organisation in Uzbekistan, on September 15, 2022. / The Express Tribune

The Iranian and Pakistani business communities have stressed the need for enhancing barter trade between the two countries, and also urged the US to allow Islamabad to buy gas from Iran.

“Barter trade has no limit; hence, the business communities of both countries need to help each other to increase it at a considerable level,” Gholamhossein Shafe’i, President of the Iran Chamber of Commerce, Industries, Mines and Agriculture (ICCIMA) said on October 26.

The remarks were made during the meeting of the Iranian business delegation and representatives of the Karachi Chamber of Commerce and Industry (KCCI).

Shafe’i, who led the Iranian delegation of four members, urged the business communities of both countries to come forward and take decisions to find the best solutions of mutual interest. In his address, he proposed to establish a 10-member committee to extend the barter trade and added that “our current progress is leading us towards free trade agreement.”

“Iran needs wheat, rice, cotton, etc., and Pakistan wants to overcome its energy crisis; however, both countries could cater to the required needs of each other through barter trade,” Shafe’i added.

The two sides also agreed to form a joint committee to expedite the implementation of a Free Trade Agreement (FTA) and made calls to make Iran part of the China-Pakistan Economic Corridor (CPEC) project.

According to the Iranian official, the aspects of the FTA have been finalized and the agreement will be signed in the near future.

"Iran is one of the major suppliers of energy in the world and the country is ready to meet Pakistan's growing needs in the energy sector," Shafe’i said.

For his turn, Zubair Motiwala, Chairman of the Pakistani Businessmen Group (BMG), appealed to the US government to allow Pakistan to receive gas from Iran on humanitarian grounds, as the country will face severe gas shortages during the winter, which will reduce the gas load for residential and commercial consumers.

Iran and Pakistan have taken some steps in recent months to step up energy cooperation, and talks have recently been held to restore the delayed Iran-Pakistan gas pipeline.

The Iranian Ambassador to Pakistan, Mohammad Ali Hosseini, said on October 21 that Tehran was ready to provide petrol, electricity and natural gas to Islamabad at cheap rates to cope with the worsening situation.

In February 2019, Tehran expressed its desire to become a part of the multi-billion-dollar China-Pakistan Economic Corridor (CPEC) project, under which the electricity supply to the Pakistani port of Gwadar from Iran will start by December 2022.

Meanwhile, speaking about the possibility of cooperation between Iran, Pakistan, and Russia to export Russian gas to Islamabad through Tehran, Iranian Deputy Oil Minister Ahmad Asadzadeh said on October 13 that "Iran's neighboring states are a large market with big gas needs."

"It's a huge opportunity for Gazprom to export to this market through Iran. For example, Pakistan is a major consumer of gas. They have few resources... In this sense, cooperation between Russia, Iran, and Pakistan could be very beneficial,” Asadzadeh added.

In July, the National Iranian Oil Company (NIOC) and Russian energy giant Gazprom, signed a memorandum of understanding on strategic cooperation, according to which Tehran and Moscow will work on a joint project to export gas to Oman and Pakistan.

This comes off the back of a $40 billion contract to develop seven Iranian oil fields. The Iran-Pakistan gas pipeline, also known as the Peace pipeline, or IP Gas, is currently under construction to deliver natural gas from Iran to Pakistan. At the same time, Russian involvement is expected to fast-track the completion of the pipeline.