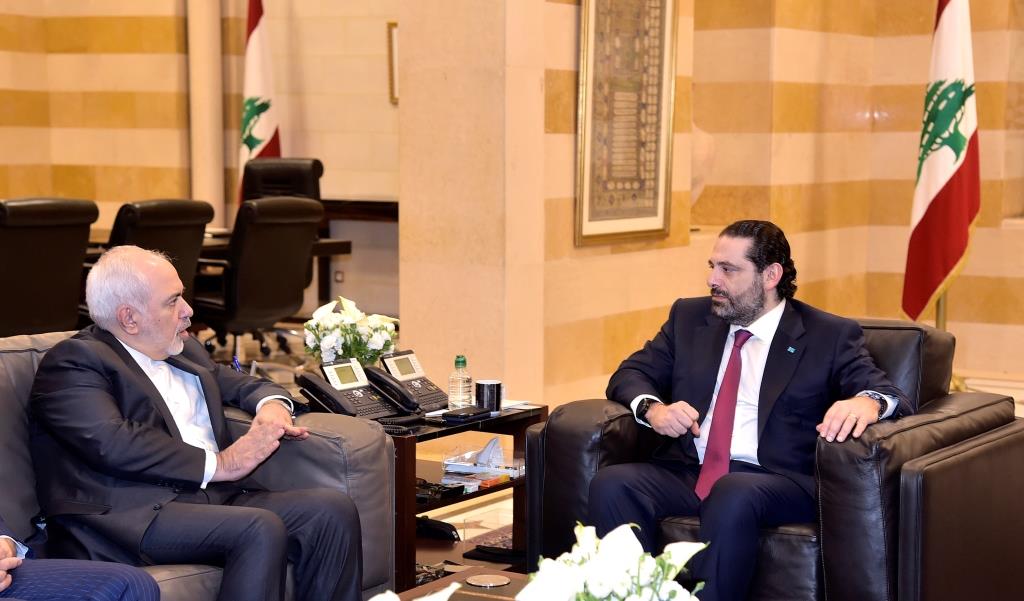 “It is an honor for us that we have always stood with the nations of the region, especially the Lebanese people,” Zarif said on his two-day trip according to the official website of the Iranian foreign ministry. “We are standing with the Lebanese people and are ready to expand our cooperation in various fields of mutual interest,” he said in a meeting on February 10 with representatives from various political parties and movements in Beirut.

Zarif’s visit comes a few weeks after Lebanon's presidency announced the formation of the new national unity government, putting an end to a nine-month stalemate that had fueled the country's economic woes. The new government is led by the Western-backed Prime Minister Saad al-Hariri and includes Hezbollah, which has expanded its role in the new cabinet.

Zarif said Iran is waiting for Lebanon to show a desire to accept military assistance, reiterating an offer of support to the U.S.-backed Lebanese military.

On the second day of his visit, the Iranian foreign minister met with top Lebanese officials, including President Michel Aoun, Prime Minister Saad al-Hariri and Parliament Speaker Nabih Berri, to discuss regional issues like Palestine, Yemen, Syria and the Syrian refugees in Lebanon, expansion of bilateral trade and economic ties, and Iran’s public and private sectors participation in projects in Lebanon, according to the Iranian foreign ministry.

Over one million Syrian refugees have fled to neighboring Lebanon since civil war broke out next door in Syria nearly eight years ago. Iran has provided significant support for the Syrian government including logistical, technical, financial and military support.

Iran sees the survival of the Syrian government, led by President Bashar al-Assad, as being crucial to its regional interests. Iran and Lebanon-based militant group Hezbollah have increased their political weight in Syria, where Hezbollah has fighters deployed in the southern part of the country, including an infantry army equipped with rockets, tanks, and elite forces.

During his two-day visit, Zarif also met with Secretary General of Palestinian Islamic Jihad, members of the Political Bureau of Hamas Movement, the leaders of Syria- and Lebanon-based Palestinian groups, and the leader of Hezbollah, Hassan Nasrallah. According to reports, they discussed the issue of Palestine, the Resistance Movement and the importance of unity and solidarity for “thwarting the plots hatched by the enemies of the Muslim world and the Palestinian people.”

Iran has considerable influence in Lebanon thanks to Hezbollah, which the United States and other western governments consider a terrorist organization. Hezbollah and groups that support its possession of arms have a majority in the Lebanese parliament.

Lebanon is technically at war with its neighbor Israel, and the Israeli government believes that Hezbollah has been struggling to get a hold of weapons that could be used in a future war against Israel. In recent years, Israel has carried out dozens of airstrikes on Iranian and Hezbollah targets inside Syria. Israel has vowed to not let Iran nor Hezbollah create a permanent presence in Syria.

Last week, the head of Hezbollah, Hassan Nasrallah, said he was ready to secure air defense systems for the Lebanese army from Iran to confront Israeli warplanes and to secure, “everything it wants to be the strongest army in the region,” according to Reuters.

Meanwhile, the United States says military aid to Lebanon is for strengthening the army as the sole military force defending the country and to counter threats from neighboring Syria.

The United States Ambassador Nathan Sales, a coordinator for counterterrorism at the Department, said in November 2018 that Tehran gives Hamas and other Palestinian militant groups $100 million a year and spends about $700 million a year on Hezbollah.