Iran Leader Says US Military Will Be Expelled From Middle East 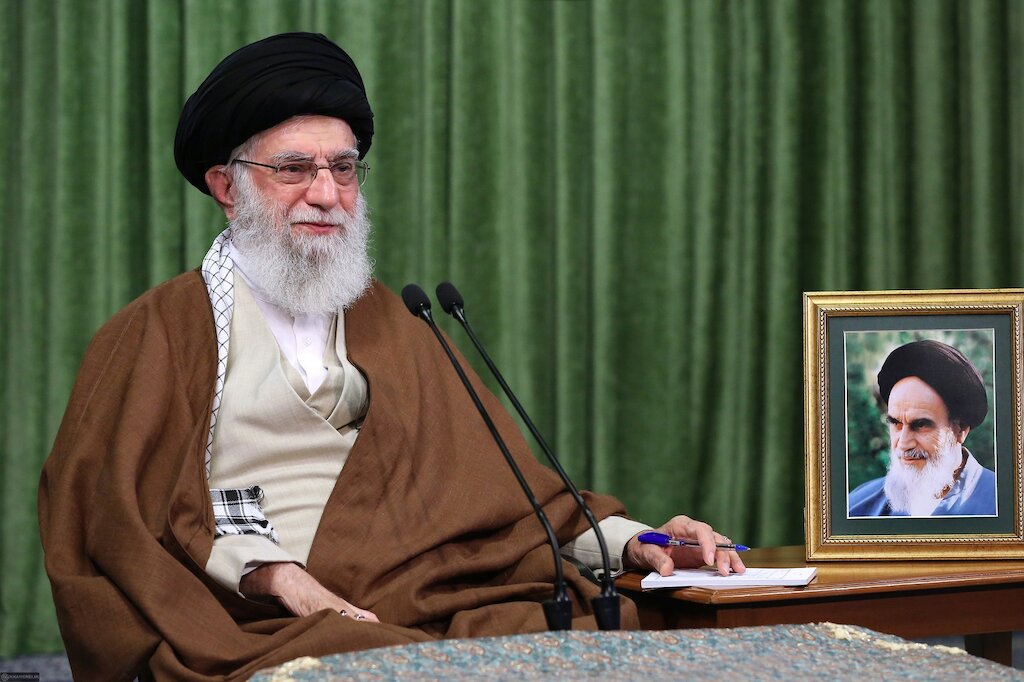 Iran's Supreme Leader Ayatollah Ali Khamenei addressed representatives of various youth groups from among the country’s university students via video conference in the capital Tehran, on May 17, 2020. / Khamenei.ir

Supreme Leader of Iran Ayatollah Seyyed Ali Khamenei has criticized the U.S. troops' presence in the Middle East region, stressing that the Americans will be expelled from Iraq and Syria.

“The long-term actions of the US have caused the government of that country to be abhorred in a large part of the world,” Khamenei said while addressing a meeting with the representatives of political, scientific, cultural and student groups on May 17.

“These actions include warmongering, helping notorious governments, advocating terrorism, supporting oppression wholeheartedly, and the like. Of course, the Americans cannot stay for long in Iraq or Syria, and they will be expelled.”

The meeting was held in the presence of thousands of students via video conference due to the health guidelines issued by the National Committee on Combating Coronavirus that has banned gatherings of large crowds, according to the official website of the Iranian leader.

The announcement comes after Iraq’s new Prime Minister Mustafa Al-Kadhimi announced on May 16 that the country's military will soon begin a major offensive against ISIS and that militias backed by Iran will be part of the operation.

The United States and Iran both have been major geopolitical players in Iraq since the toppling of dictator Saddam Hussein in 2003. Tensions between Iran and the U.S. have escalated since May 2018, when Washington withdrew from the 2015 nuclear deal and reimposed hard-hitting sanctions on the Islamic Republic’s economy.

In June 2019, Iran shot down the U.S. drone in the Gulf, and conducted missile attack at the U.S. bases stationed in Iraq in January 2020, shortly after an American drone strike, which killed top Iranian military commander Qassem Soleimani in Baghdad. In April, Trump had instructed the U.S. Navy to fire on any Iranian ships that would harass it at sea but said later he was not changing the military’s rules of engagement. After Trump’s statement, the head of Iran’s Revolution Guards Corps, Major General Hossein Salami, said that Iran would destroy U.S. warships if its security is threatened in the Gulf.

Earlier this month, five Iranian super-tankers carrying gasoline and other similar products, estimated to be worth $45.5 million, have sailed towards Venezuela. The first Iranian tanker is expected to reach the Venezuelan shores on May 25. Washington reportedly deployed a fleet of warships in the Caribbean waters, due to the Iranian shipment.

The fuel shipments were dispatched upon a request from Venezuelan President Nicolas Maduro, whose country has been facing an acute shortage of gasoline at its refineries. Tehran will reportedly receive at least nine tons of gold in exchange for supplying gasoline to Venezuela.

A senior official in Washington said in statements last week that the U.S. was considering measures in response to Iran’s shipment of fuel to Venezuela. For its part, Iran warned that any "pirate-like" action by the U.S. Navy against the Iranian fuel shipments to Venezuela would trigger a “harsh response.”