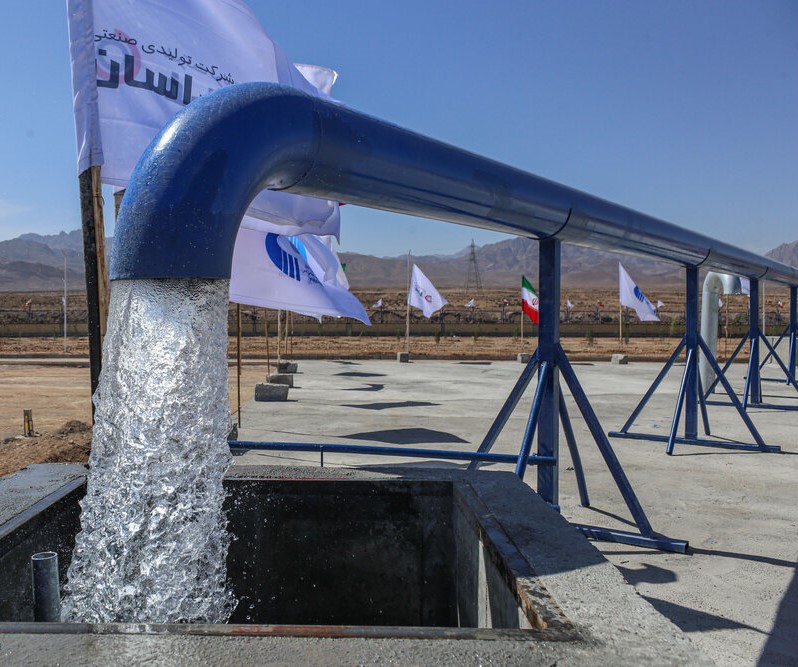 Iranian President Hassan Rouhani launched the next phase of Iran’s major water desalination and transfer project which is aimed at supplying Persian Gulf water to central and eastern Iran through pipelines, on March 14, 2021. / MEHR News Agency

The Iranian president has inaugurated the second phase of a project to transfer desalinated water from the Persian Gulf and the Sea of Oman to central and eastern provinces.

"The implementation of the huge project to transfer water from the Persian Gulf and the ​​Oman Sea to the central plateau and eastern regions of the country has other achievements in addition to providing a platform for the development of the country," President Hassan Rouhani said in a video conference on March 14, while addressing the inauguration ceremony of the project transferring water to the provinces of Hormozgan, Kerman, Yazd, Isfahan, South Khorasan, Khorasan Razavi and Sistan-Baluchistan.

Rouhani described the projects as “a great revolution” in the field of water and soil of Iran, saying that the southern littoral countries of the Persian Gulf have been extracting water from the Gulf for many years.

The project aims to address water shortage, which remains an issue of great concern for people, farmers and industrialists living and working in Iran's desert regions including Kerman in southern Iran.

The first phase of the project, completed in November 2020, included a desalination unit in the port city of Bandar Abbas, seven pumping stations, 33 water storage tanks, 10 power substations and a 150-kV power transmission line from Hormozgan to Kerman.

The project will turn 450 million cubic meters (mcm) of salt water into 150 million cubic meters of desalinated water. Major industrial plants, the Gol-Gohar Complex, Sarcheshmeh Copper Mine and Chadormalu Company in Yazd will receive 45 mcm, 40 mcm and 30 mcm of water annually, respectively. The rest will be used for drinking water in dry regions.

The project includes three major pipelines with a total length of 3,700 kilometers. With the completion of all three pipelines, in total, 550 million cubic meters of freshwater will be transferred from the Persian Gulf to the mentioned regions.

The first pipeline transports Persian Gulf water to Hormozgan, Kerman, and Yazd provinces; the second line will transfer water to the provinces of Kerman, South Khorasan, and Khorasan Razavi, while in the third line Persian Gulf water is transferred to Yazd and Isfahan provinces. Around $3.88 billion has been invested for the completion of the first line.

The second line, spanning 1,550 km in length, has been implemented with a total investment of about $11.1 billion. About $8.3 billion has also been invested in the third line which is 910-km long and has 10 water pumping stations along with it. The second and third lines are expected to be completed and put into operation by March 2025.