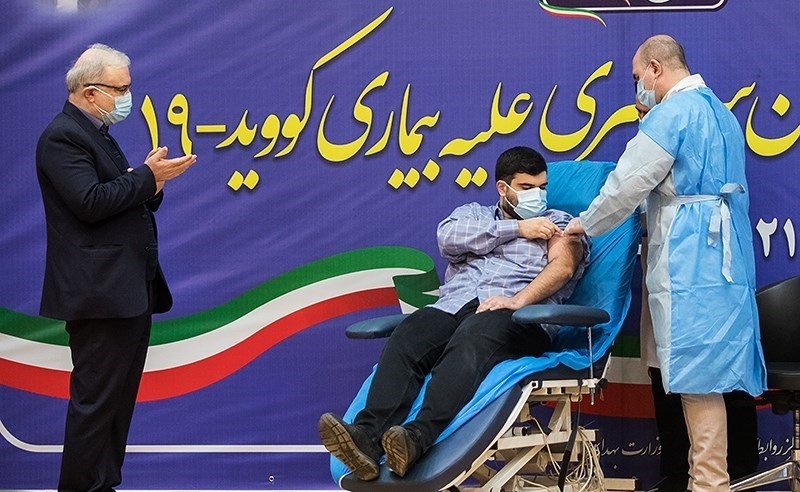 The first round of coronavirus vaccinations began in Iran on February 9, with Russia's Sputnik V, as the health minister’s son received the first injection. / Tasnim News Agency

An Iranian health minister’s son has become the first person in Iran who received the Russian-made vaccine, Sputnik V as the country rolled out its vaccination program.

“Vaccination will be rolled out in 635 charitable, government, and reference hospitals struggling with coronary heart disease,” said Saeed Namaki, Iran’s health minister, according to a report by Tasnim news agency.

Healthcare workers, people aged over 65 and those with severe diseases will be the first people vaccinated in Iran, Namaki added.

Meanwhile, President Hassan Rouhani hailed the beginning of mass vaccination. Prior to his remarks, Rouhani watched live how Minister Namaki’s son Parsa Namaki became the first person in Iran to receive the Sputnik V jab, in order to “build trust” in the Russian vaccine.

Officials say Iran will receive around 16 million doses of vaccines through the World Health Organization’s COVAX program, as well as import more than 25 million doses from abroad and produce 25 million other doses domestically.

Iran is now negotiating with Russia to launch joint production of a COVID-19 vaccine. The country’s Ambassador to Russia Kazem Jalali said on February 8 that officials in Tehran hope that thanks to the efforts made by Tehran and Moscow, “we will witness a joint production of Sputnik vaccine in Iran in the next two months.”

During his visit to Russia, a deputy Minister of Health and the head of Iran Food and Drug Administration, Mohammad Reza Shanesaz, said Iran had a lot of potential in the production of vaccines, and the country also used the knowledge of Russia to be able to export and strengthen the field of pharmaceutical technology. According to Shanesaz, 98 percent of Iran’s drug needs are met domestically, but the government is trying to meet the full pharmaceutical needs of the country by activating the private sector.

Twelve Iranian companies have applied for COVID-19 vaccine production, of which eight have already launched their development activities. Two of these companies have already started testing their vaccines — Barekat and Pasteur — in humans, while one more company (Raazi) is waiting for an approval to launch human trials.

President Hassan Rouhani said on January 19 that if not for the sanctions, barriers and restrictions by the Trump administration, purchasing of vaccines would have started earlier, and that “it was the crime that the Americans committed against the Iranian people.”