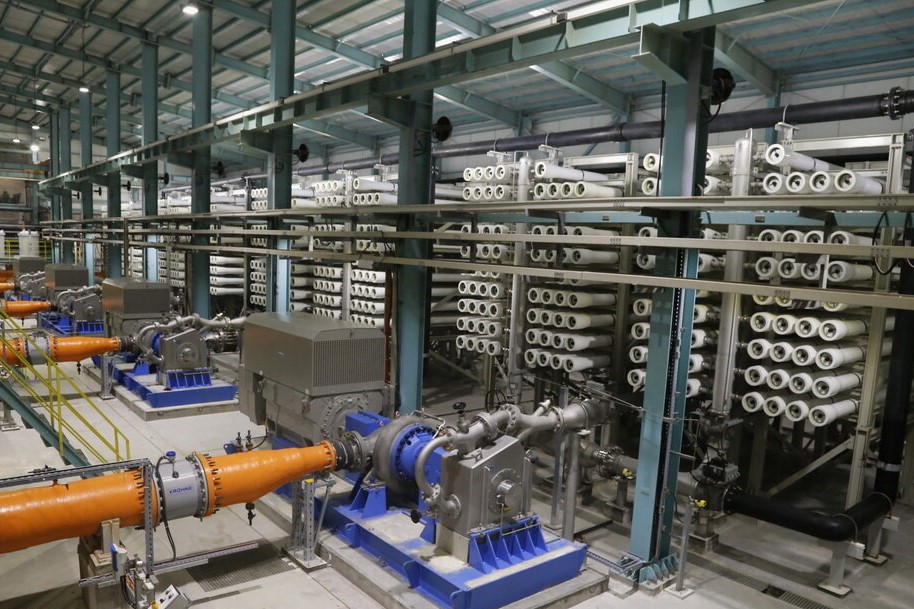 In a ceremony on November 5, Iranian President Rouhani, through video-conference, inaugurated the first phase of the water transfer project from the Persian Gulf to the central provinces. / MEHR News Agency

Iranian President Hassan Rouhani has inaugurated the first phase of a project aimed at desalinating and transferring water from the Persian Gulf to the central areas of the country.

In a video conference on November 5, Rouhani ordered the start of operation of the first phase of the Persian Gulf water transfer project to the central plateau of Iran. The first phase of the project is capable of desalinating and transferring around 200,000 cubic meters of water in 24 hours. The water will meet part of the needs of industries and residential areas in central and southeastern provinces.

Power and energy supply and pumping, and balance tanks and shock absorbers, and the 45,000 cubic meter reservoir and water exploitation system of Sirjan Golgohar Industries were also inaugurated as part of the first phase of the project, according to the Iranian presidency's press service.

A total of 16.3 trillion tomans (about $3.88 billion) of credit has been spent for the desalination project and water transmission line, and their employment capacity is 16,000 people for the construction period and 1,200 people for the operation period. These projects have been designed and implemented by the Iranian engineers, using the expertise of experienced companies in the Persian Gulf.

The overall length of this giant water transfer line is about 800 kilometers. In the first phase of this project, 305 kilometers (km) of pipelines, seven water pumping stations, and 10 electricity substations as well as 150 km of power transmission lines were designed and implemented in addition to constructing several balance tanks and storages. There are three main lines in this project that will eventually transfer some 600 million cubic meters of water from the Persian Gulf to Kerman, Yazd, and Hormozgan provinces every year.

Speaking at the opening ceremony of the first phase of the water transfer project and three related projects, Rouhani said that “this water transfer line to the Central Plateau will give hope to all farmers and people in the region about a source of sustainable water”.

"Very important and historical projects will be put into operation by the end of the year and early next year, the restoration of Lake Urmia and the huge plan to transfer oil from Goreh to Jask is one of them," the president said, adding that “in the future plan, 50% of the water consumption of the people of Bandar Abbas will be provided through seawater desalination”.

This is the first of such projects to supply desalinated water to desert areas. Iran has developed a new technology to desalinate water for regions that are more frequently affected by drought, including areas in and around deserts.

Ardakanian said that seawater is used in two ways, i.e. in the form of saltwater and also desalinated water, noting that the water needs of 17 provinces in the central plateau and coastal areas have been studied and the needs have been identified.