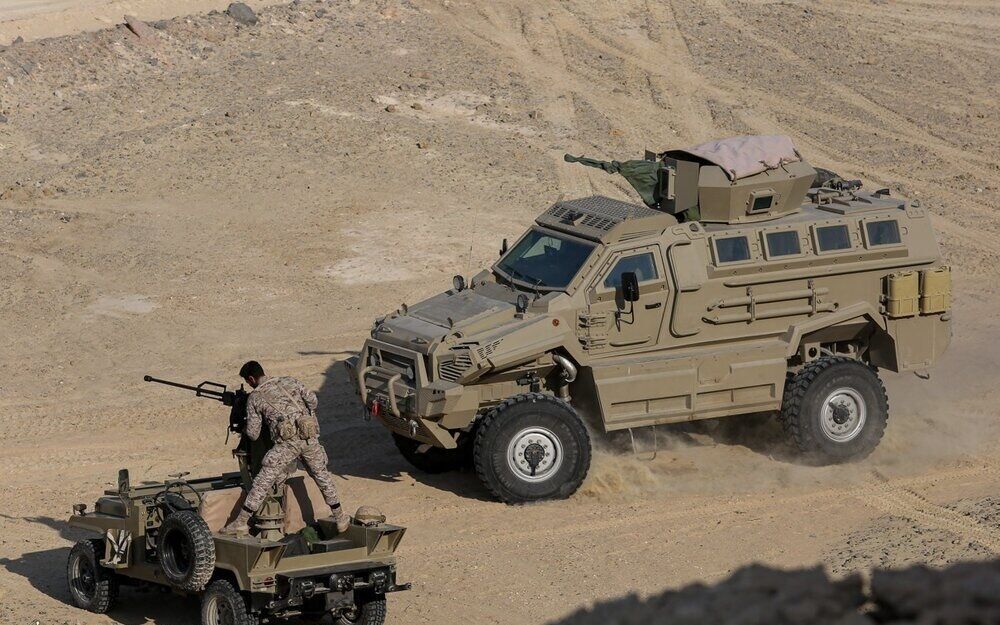 The Ground Forces of the Islamic Revolution Guard Corps launched massive military drills in northwestern Iran aimed at promoting the combat readiness of the troops, on October 17, 2022. / IRNA news agency

The Ground Forces of the Islamic Revolution Guard Corps (IRGC) have started massive military drills in the country’s northwestern areas along the Araz River on the border with Azerbaijan.

“Parachute heliborne operations, night operations, helicopter combat operations, combat and suicide drone operation, as well as constructing a bridge over the Araz River, control of roads, the seizure of heights, and destruction, are on the agenda of the drills,” the IRGC Ground Force Commander Brigadier General Mohammad Pakpour said on October 17, according to the Iranian state news agency IRNA.

He added that the drills aim to convey a message of peace and friendship and lasting security to neighbouring countries, and demonstrate the readiness of the IRGC Ground Forces and other armed forces to defend the country's borders against its enemies and respond decisively to any threat.

The drills commenced after Armenia agreed to facilitate a civilian European Union mission alongside the border with Azerbaijan which agreed to cooperate with this mission as far as it is concerned.

The exercises, which are being held in Iran's northwestern provinces of Ardabil and East Azerbaijan, are part of an annual mission aimed at promoting the combat readiness of the IRGC Ground Forces, amid Tehran's long-standing concern about Azerbaijan's military cooperation with Israel.

In a telephone conversation with his Azerbaijani counterpart Jeyhun Bayramov on October 15, Iranian Foreign Minister Hossein Amir-Abdollahian expressed Tehran's concern over the presence of "foreign forces" in the Caucasus.

“That is a mutual concern of the regional countries and Tehran opposes the deployment of any foreign forces in the region,” Abdollahian added, according to the Iranian foreign ministry’s website.

Answering a question about the timing and location for the military rehearsal, Iranian Foreign Ministry spokesman Nasser Kanani said on October 17 that "Iran's military exercises are nothing new," and added that these exercises are held at different times depending on the requirements of the Iranian army.

Brig Gen Ali Akbar Pourjamshidian, a deputy commander of the IRGC's Ground Forces said on October 16 that an Israeli presence in Azerbaijan would be a serious threat to "the whole Caucasus region".

"We do not consider Azerbaijan or Armenia a threat to the Islamic Republic," Pourjamshidian said, adding that "with the news and the intelligence that we have, we know that today, the presence of the Zionist regime [Israel] in the Caucasus region can be a serious threat to the entire region".

The commander noted that Iran regularly holds similar drills in other parts of the country, and stated that Tehran did not seek any conflict with its neighbours but was ready to "defend its security with full authority".

Azerbaijani President Ilham Aliyev has repeatedly denied Iran's allegations about the presence of the Israeli and other foreign countries’ forces in the Azerbaijani territories, describing them as “baseless”.

"We are showing good will. But that does not mean that we will accept groundless accusations against ourselves. I am saying this to the Azerbaijani people and the whole world here in Jabrayil, on the banks of the Araz River, that all baseless accusations against us will not remain unanswered," President Aliyev said during his visit to the southern district of Jabrayil in October 2021.