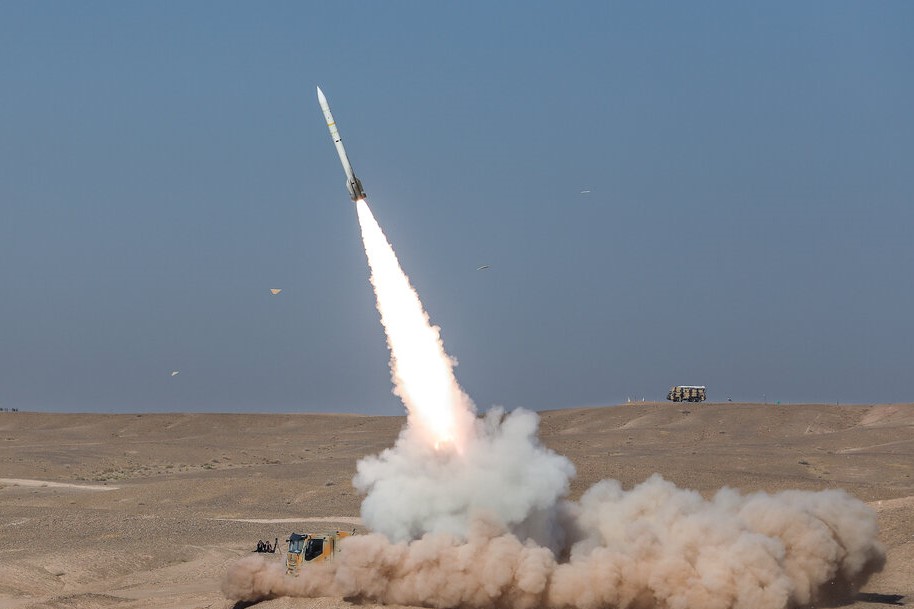 The air defense units from the Iranian Army and the Islamic Revolution Guards Corps (IRGC) launched a a large-scale military exercise dubbed "Guardians of Velayat Sky" on October 21, covering more than half of the country’s territories with focus on protecting the strategic sites. / MEHR News Agency

The air defense units from the Iranian Army and the Islamic Revolution Guards Corps (IRGC) have launched a military exercise covering more than half of the country’s territories with the main focus on protecting the strategic sites.

Various types of homegrown missile systems, electronic warfare equipment, and communication systems have been deployed in the war games codenamed “Guardians of Velayat Sky” which started on October 21, according to Iran’s Mehr news agency.

"The first stage of the drill involves the expansion and deployment of defense systems, including missile and radar systems with a focus on the mobility and rapid response of the operational forces,” the spokesman of the drills, Second Brigadier General Abbas Farajpour, said.

He added that the maneuvers cover the principles of passive defense to deceive the enemy and in the next step to establish secure and multi-layered communication between defense systems through an integrated air defense network to make decisions appropriate to the threat.

Iran's domestically manufactured air defense equipment, including fighter jets, bombers, and drones are flown in the military exercise to practice countering aerial threats in low, medium, and high altitudes. The air defense systems “Third of Khordad”, “the Fifteenth of Khordad” as well as the Mersad and Tabas missiles systems hit the set targets during the first day of the drills.

The drills started a few days after the lift of the decade-long UN ban on the sale of arms from and to Iran on October 18 under the terms of the UN Security Council Resolution 2231 that blessed the 2015 nuclear deal between the Islamic Republic and world powers.

It is also expected that in addition to lifting the arms embargo, travel restrictions for 23 political and military Iranian officials will also be lifted. Under this framework, these 23 individuals still face restrictions on their property in the United States and for conducting any transaction, which will be completely lifted in the eighth year after the 2015 Iranian nuclear deal came into effect. It should be noted that Iranian political and military officials have no financial or commercial interactions in the United States or any financial deposits in American banks and financial institutions.

Following the official end of Iran's arms embargo, some military analysts acknowledged that Iran can produce even better weapons than the ones purchased.

Speaking on the threshold of the large-scale air drills, Commander of the Iranian Armed Forces’ Khatam-al Anbiya Central Headquarters, Major General Gholam Ali Rashid, said that the Iranian Army “not only play an active role in these three areas, but also have organized and built the defense power with an aggressive deterrence approach”.

He added that the air defense forces have shown in the military exercises that they will counter all of the threatening actions of the enemy.