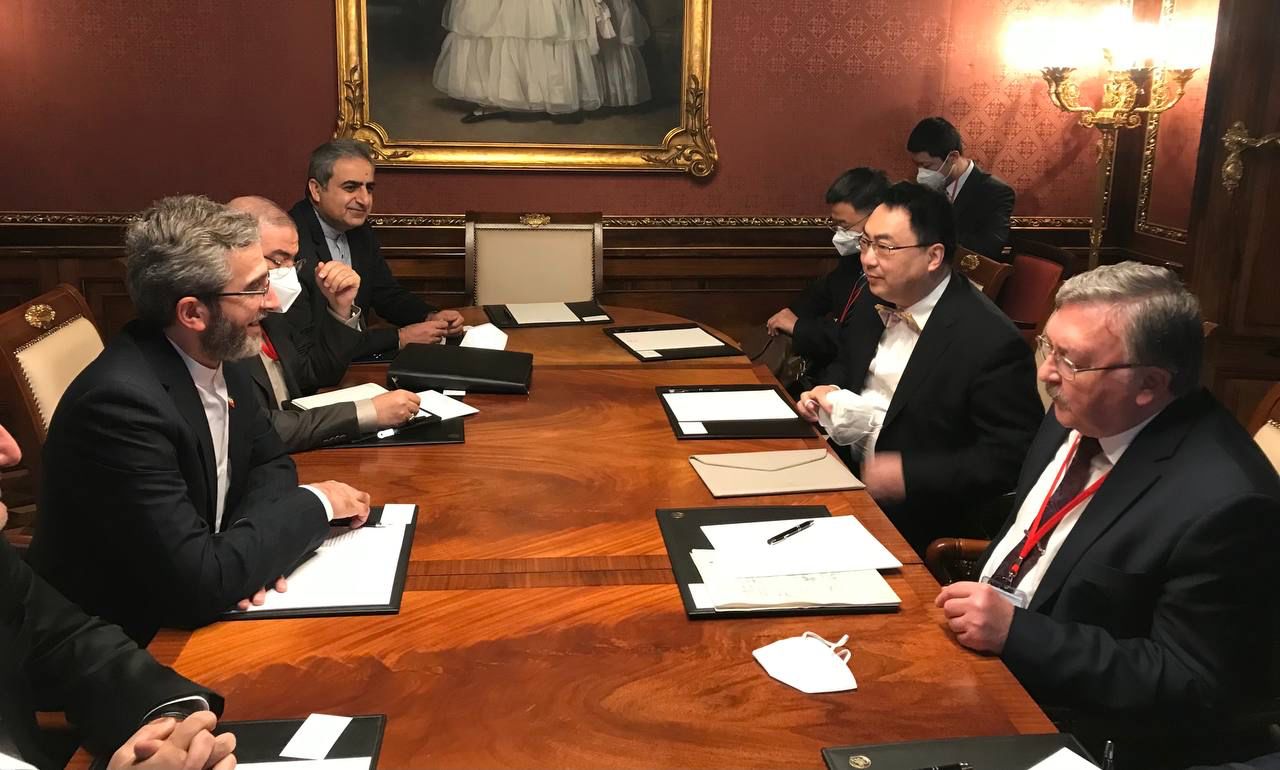 Iran’s chief nuclear negotiator, Bagheri Kani held a trilateral meeting with representatives of Russia and China after arriving in the Austrian capital, Vienna on December 9, 2021. / Twitter

Iran’s Foreign Minister Hossein Amir-Abdollahian has said Tehran is serious about reaching an agreement during the eighth round of Vienna talks aimed at reviving the 2015 Iran nuclear deal.

“We are all in Vienna to negotiate to reach a good agreement,” Amir-Abdollahian wrote in an Instagram post on December 9.

“The Western parties should know that in the last eight years, enough has been said and they made promises that were never fulfilled, but today is the time to act and we are working to reach a serious and good agreement,” he added.

On the same day, in a phone conversation with EU’s Foreign Policy Chief, Josep Borrell, Amir-Abdollahian complained that European sides’ public criticism of Iran’s proposals slowed down the process of reaching an agreement.

Meanwhile, Amir-Abdollahian’s statement came ahead of eight round of talks in Vienna between Iran and P4+1 (Britain, France, Germany, Russia, and China) to revive the JCPOA, which set restrictions on Iran’s nuclear program in exchange for sanctions relief. The US is indirectly involved in the negotiations.

The talks in the Austrian capital were resumed on November 29 after six rounds of talks held earlier this year. The seventh round of talks to revive the JCPOA broke off on December 3 after Iran submitted two draft proposals to lift US sanctions and nuclear issues, as France, Germany, and Britain expressed concern with Iran’s demands.

Iran’s chief negotiator Ali Bagheri Kani, who arrived in Vienna for the new round of talks on December 9, described the ongoing negotiations as “constructive.” While there, he held meetings with senior Russian and Chinese negotiators, as well as Enrique Mora, Deputy Secretary-General of the European Union.

In early October, Iran urged the US to release at least $10 billion of frozen Iranian funds if it wants Tehran to resume nuclear talks.

On December 9, Iran’s Deputy Foreign Minister for Economic Diplomacy, Mehdi Safari, said that so far, $3.5 billion of Iran’s properties have been released, and negotiations to remove the rest of it began. However, US Department of State Spokesperson Ned Price dismissed the report saying that “the United States has not released any money to Iran.” According to Price, “any such report to the contrary is incorrect. We also understand that our partners have not transferred frozen funds to Iran.”

On Tuesday, Iran’s Foreign Ministry Spokesman Saeed Khatibzadeh condemned the US for imposing sanctions on several more Iranian individuals and entities, saying the move was counterproductive to the success of talks to revive the JCPOA.

The US Treasury Department has designated eight individuals and four entities inside Iran for human rights violations, including Basij militia commander Gholamreza Soleimani. The Special Units of Iran’s Law Enforcement Forces and Counter-Terror Special Forces, as well as their senior officials, have also been blacklisted.