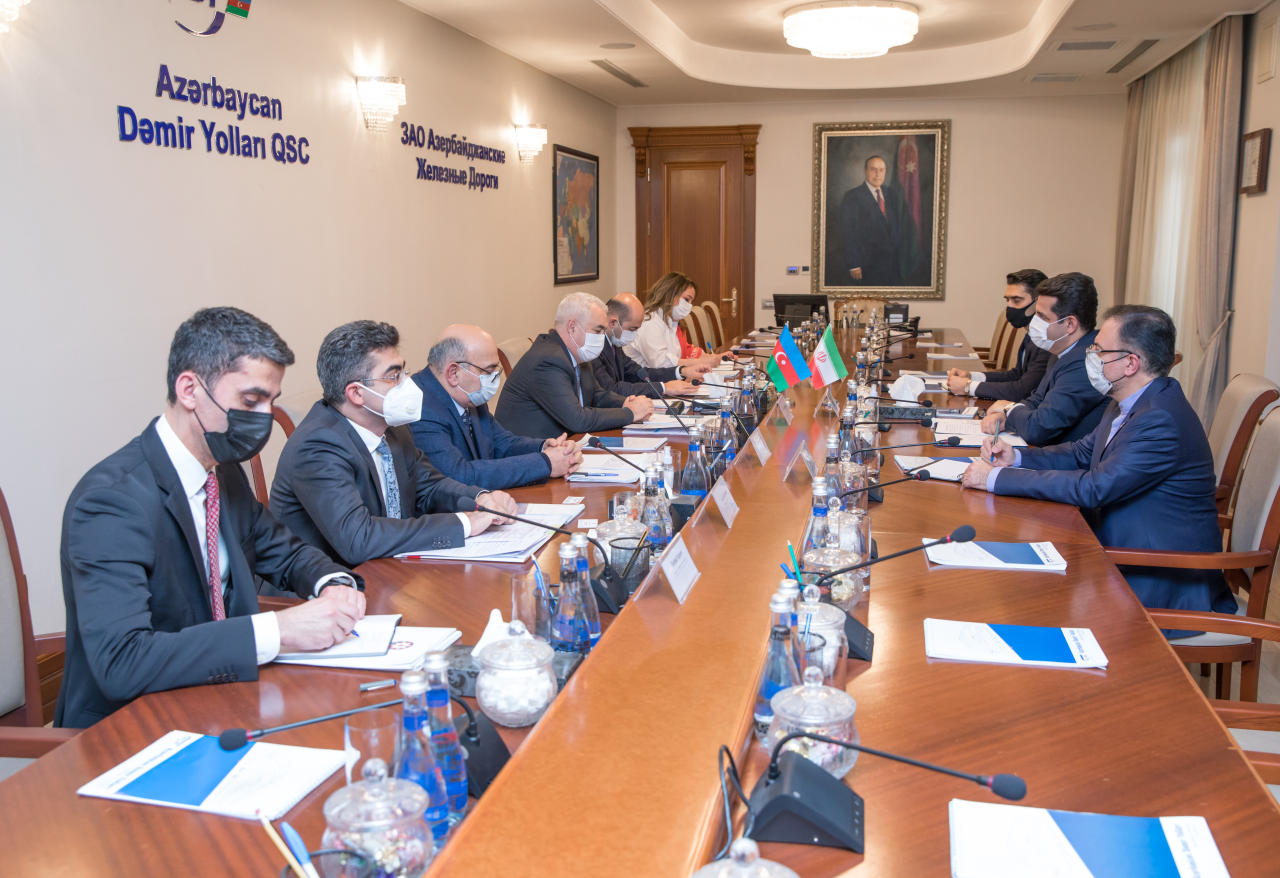 Chairman of Azerbaijan Railways Closed Joint-Stock Company Javid Gurbanov held a meeting with Iranian Ambassador to Azerbaijan Seyyed Abbas Mousavi, on January 15, and exchanged views on the strategic importance of the North-South corridor in terms of international cooperation in the field of transport. / IRNA news agency

According to the agreement, both sides agreed to expand their railroad cooperation with the aim of boosting cargo volume of two million tons a year and facilitate railroad developments. During the meeting, Rasouli and Gurbanov learned more about the Iranian Railways Development Center and stressed the need for knowledge sharing and development of mutual relations between the railways of the two countries.

The volume of cargo transit between Iran and Azerbaijan increased to 480,000 tons in 2020 despite the outbreak of coronavirus. Trade turnover between Azerbaijan and Iran amounted to $339 million during 2020. Of the total turnover, the export of Azerbaijani products to Iran amounted to $38.4 million, while import from Iran to $300.6 million.

On January 15, Javid Gurbanov and Iranian Ambassador to Azerbaijan Seyyed Abbas Mousavi, exchanged views on the strategic importance of the North-South corridor that will play a crucial role in the development of not only Iran, Azerbaijan and Russia, but also other countries in the region, and will increase trade turnover through export-import operations through this route. In addition, the importance of implementation of the Rasht-Astara railroad was underlined.

At the meeting, the ambassador emphasized that Iranian companies are also interested in the restoration work in Azerbaijani territories that were recently liberated from Armenia's occupation.

Azerbaijani Deputy Prime Minister Shahin Mustafayev - who is on an official visit to Tehran - met with the Iranian Minister of Roads and Urban Development Mohammad Islami after a meeting of the Iran-Azerbaijan Economic Commission.

During the meeting, Islami said that the volume of exchanges via the Astara-Astara railway increased by 25%, and added that “passing through Azerbaijan was an opportunity for us to activate the North-South corridor, and we have always insisted that the highway be active in this corridor”.

"We agreed to build a new road bridge at the border. With the construction of this bridge, the Baku-Astara highway will be connected to the Ardabil-Astara-Rasht highway. An agreement will be signed in Astara next month and a groundbreaking ceremony for the construction of a new terminal and bridge will be held” the Iranian minister said.

Azerbaijan and Iran agreed to build a railway between Rasht (Iran) and Astara in December 2019, which will be part of the International North-South Transport Corridor.

In December 2020, the governor of Iran’s East Azerbaijan Province Mohammad Reza Pourmohammadi announced the reopening of the Tabriz-Nakhchivan railway line.

"The Tabriz-Azerbaijan railway is a very suitable route for communication with the European and North Caucasus railways. Recently, according to the trilateral memorandum between Iran, Russia and the Republic of Azerbaijan for its reconstruction, the Nakhchivan railway can be reopened."

Referring to the reopening of the Jolfa-Nakhchivan railway in the near future, Pourmohammadi said: "The completion of the Jolfa-Cheshmeh Soraya-Gholi Biglou railway is one of our most important expectations from the Ministry of Roads and Urban Development, which we hope will be seriously considered by the authorities."

Iran is trying to revive a transnational rail service linking Istanbul, Tehran and Islamabad which is expected to pave the way for connection to the new Silk Road. In December 2020, Iran, Turkey and Pakistan agreed at a meeting of the Economic Cooperation Organization’s (ECO) Transport and Communications Ministers to relaunch the Istanbul-Tehran-Islamabad freight trains in 2021.

In addition, Iran is taking active steps to build connections with international ports and countries, which are currently staging posts on the new Silk Road, China’s international economic trade policy to develop rail and shipping links with Europe.