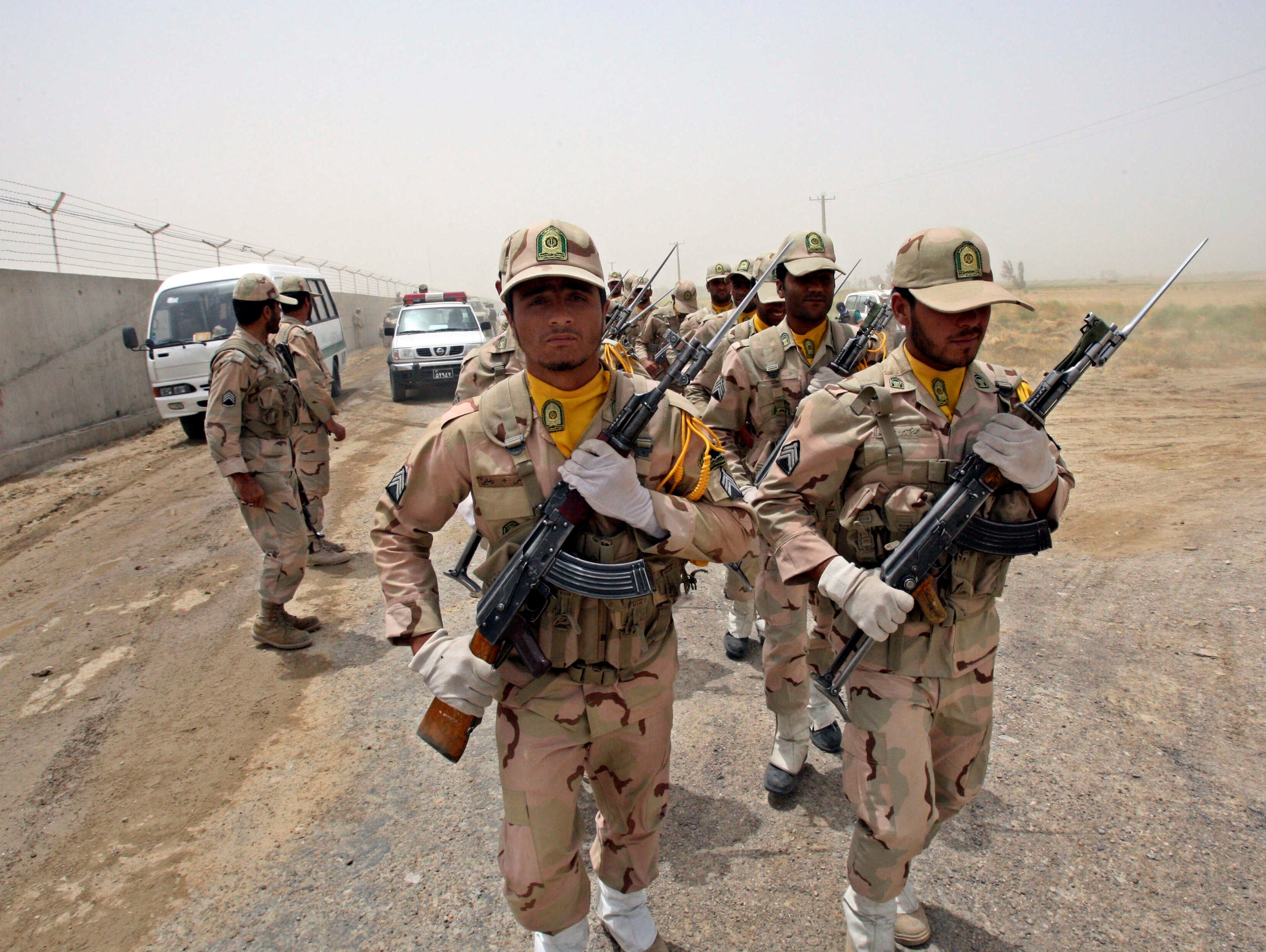 A group of Iranian border guards march at the eastern border of Iran shared with Pakistan and Afghanistan, near Zabol, in Iran's southeastern province of Sistan and Baluchestan on July 19, 2011.

Iran’s Islamic Revolution Guards Corps (IRGC) has neutralized an armed gang in West Azerbaijan Province on the border with Turkey.

“The security forces of the base had carried out a security operation on Sunday night [August 23] in Maku during which the terrorists were ambushed as they were trying to infiltrate the country,” the public affairs department of IRGC’s Hamzeh Seyyed al-Shohada base announced in a statement, according to Iran’s ISNA news agency.

All three members of the gang were killed during the clashes with Iranian security forces, while none of the IRGC forces were injured or killed. A lot of weapons, ammunition, and communication equipment were also seized, the statement added.

The West Azerbaijan province has more than 960 kilometers of joint borders with Turkey, Azerbaijan, and Iraq. Three Iranian border guards were killed in one of such clashes with "armed insurgents" in the province on May 29.

IRGC’s Hamzeh Seyyed al-Shohada base operates in the western and northwestern provinces of West Azerbaijan, Kurdistan, and Kermanshah, with the aim of "coordinating the activities of internal defense against counter-revolutionary and infiltrating forces".

In recent years, Turkey and Iran have repeatedly expressed concern over the activities of Kurdish rebel groups along the borders of the two countries. Iran mainly accuses the Party of Free Life of Kurdistan (PJAK), which is an Iranian branch of the PKK terrorist organization, of carrying out acts of sabotage and attacks on frontiers. Despite the fact that the United States has listed the group as a terrorist organization, Iran claims the US support to be behind the group.

Since 1984, the PKK has been involved in an armed conflict with Turkey in an attempt to carve out an independent Kurdish state, later changing its demand to Kurdish autonomy in Turkey.

Meanwhile, Iranian border guards in the western province of Kermanshah has recently discovered and seized 33 US-made rifles from smugglers in an operation.

“After receiving tips on a possible transit of weapons and ammunition cargo by smugglers into the country, a team of border guards and intelligence forces at Salas Babajani border area were immediately sent to Chafteh border checkpoint (in Kermanshah province),” Fars news agency reported on August 24.

In a relevant development on August 23, Commander of Iran’s Border Guards, Brigadier-General Ahmad Ali Goudarzi said that his forces in Saravan town in the southeastern province of Sistan and Baluchestan along the Pakistan border, have killed a “notorious” terrorist and wounded several outlaws in armed clashes.

The Baluchi and Sunni militant group, Jaish al-Adl (“Army of Justice”) has carried out several attacks on Iranian military targets in recent years. Besides Jaish al-Adl, other Sunni rebel groups operating in the border regions of Iran and Pakistan include the Baluch nationalist group known as Jundallah, and Harakat Ansar Iran, one of two groups that had split from Jundallah. In 2013, the group merged with another faction to form yet another Sunni Baluch militant group called Ansar Al-Furqan.