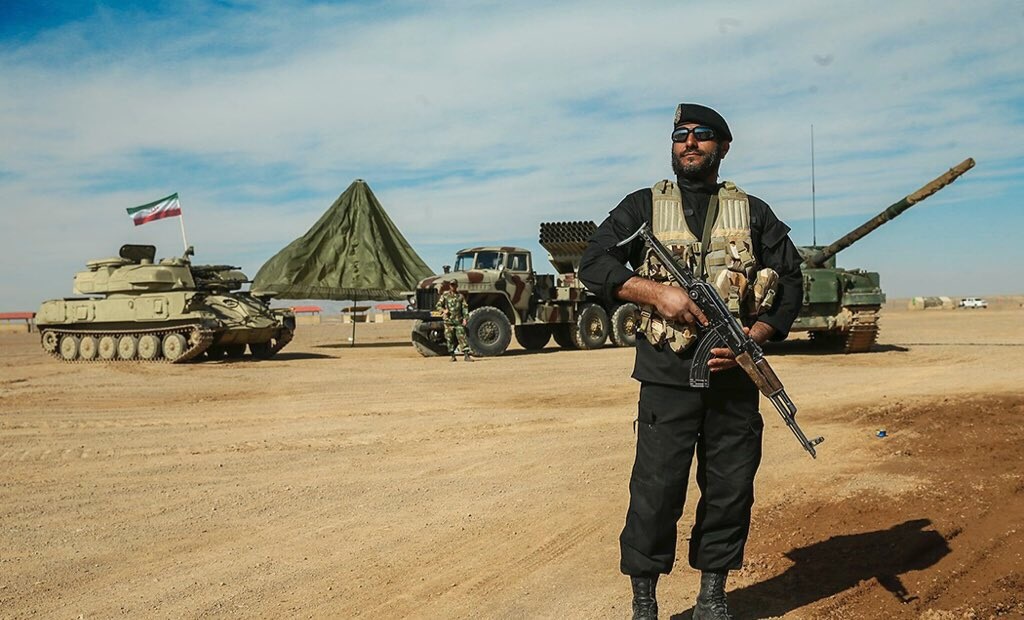 The photo was taken during the military drills code-named "Eghtedar 97" staged by the Iranian Army's Ground Forces' in the central province of Isfahan in January 2019. / Iran Newsroom

The Islamic Revolution Guards Corps’ (IRGC) Ground Force completed a two-day massive drill in the southwestern province of Khuzestan, near the Iraqi border on February 12.

“In this drill, all battalions and units were equipped with night combat equipment and were able to achieve the objectives of the exercise well,” Commander of IRGC’s Ground Force, Brigadier General Mohammad Pakpour said, adding that a combined night offensive operation has been widely practiced in complete darkness, for the first time.

The drill was aimed at assessing the latest achievements and capabilities of the forces and equipment and their operational power. The IRGC practiced offensive operations, the repeal of infiltration operations with a combination of armored and infantry forces at night, and night airstrikes during the drills.

The spokesman for the drill, Brigadier General Ahmad Khadem Seyed al-Shohada said that six offensive operations were carried out as part of the drill, adding that the command base training and war game of artillery fire components, heliborne and anti-heliborne operations equipment was "successfully launched" in the first phase of the drill.

Referring to the use of armored and airborne commando units in the exercises, he said “drones and attack helicopters of the commando and armored units of IRGC Ground Force displayed the new capabilities.”

On the sidelines of the drill, Major General Hossein Salami, Commander-in-Chief of the Islamic Revolutionary Guard Corps, also described the “effective use” of offensive reconnaissance drones and helicopters launching rockets and missiles from long distances as one of the important points in the military exercise.

The Iranian Armed Forces and the IRGC hold routine military exercises throughout the year. This exercise was one of the annual exercises of the IRGC ground forces together with its Karbala Regional Headquarters, located in the city of Ahvaz, Khuzestan Province.

On February 10, during the annual rallies held in Tehran on the 42nd anniversary of the victory of the Islamic Revolution in Iran, the IRGC displayed three ballistic missiles - Zolfaqar Basir, Dezfoul and Qiyam - developed by the IRGC Aerospace Force.

Zolfaqar Basir is the latest product of Zolfaqar class missiles that have a range of 700 km and are equipped with an optical detector capable of targeting enemy vessels at sea. Dezfoul is another model of Zolfaqar class missiles with a range of 1,000 km and is one of the IRGC Aerospace Force's tactical ballistic missiles. Qiyam ballistic missile, with a range of 800 km in two types of Qiyam-1 and Qiyam-2, is equipped with guided warheads and pin-pointing technology.