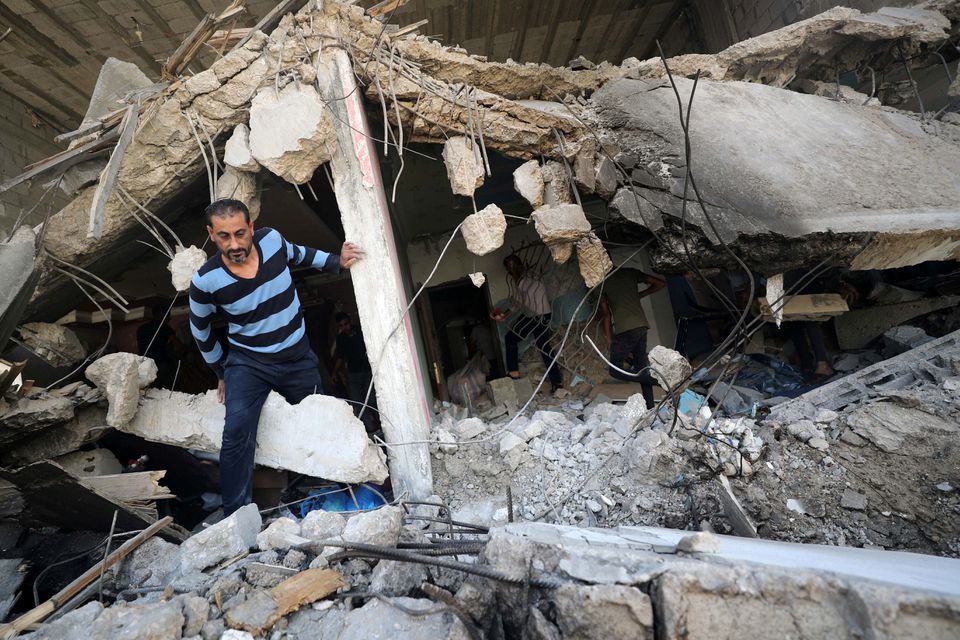 A Palestinian man walks through the ruins in the aftermath of Israeli air strikes, in Gaza City, May 17, 2021. / Reuters

Iran's President Hassan Rouhani has called on Islamic countries to counter what he calls Israel's “aggression” against the Palestinian people using all available resources.

"[Countries] must use all available resources, including the capacity of international institutions such as the United Nations and the Organisation of Islamic Cooperation, to confront the aggression and crimes of the Zionist regime," Rouhani said in a telephone conversation with his Turkish counterpart Recep Tayyip Erdogan on May 16, according to the Iranian president’s official website.

Rouhani said that the two countries, as influential states, along with other Islamic countries need to join forces to confront Israel's "crimes", and stressed the need for Tehran and Ankara to share ideas and strengthen their cooperation to resolve regional crises in Syria and Yemen.

For his part, Recep Tayyip Erdogan described the conflict in Gaza as worrying and unfortunate, and said that the international community must teach Israel a “strong and deterrent lesson” due to its "attacks in Palestine".

Tension has been mounting in East Jerusalem since May 7, when 205 Palestinians were injured in clashes that erupted after Israeli forces stormed al-Aqsa mosque following the night prayers held there on the last Friday of the holy month of Ramadan.

Hamas and other Palestinian militants in the Gaza Strip have fired around 3,100 rockets targeting Israel in the past week, according to the Israeli military. The Israeli interception system Iron Dome which can detect approaching projectiles in seconds and calculate their trajectory and target, intercepted over 1,000 of the fired rockets, while 450 fell within the Gaza Strip.

Eight Israelis have been killed in some of the 3,100 rocket attacks launched from Gaza, including a 5-year-old boy and a soldier, according to the Associated Press. Since Israel started launching airstrikes on Gaza earlier last week, 192 Palestinians have been killed, including 58 children, while 1,235 others were wounded. Some 263 Palestinians entered Egypt through the Rafah border crossing to receive medical treatment.

Iranian top officials have expressed their support for the Palestinian people and condemned the Israeli forces for the attacks. Iranian Foreign Ministry Spokesman Saeed Khatibzadeh said on May 17 that “Iran, along with Muslim nations and all freedom-seeking nations of the world that are committed to the defense of the oppressed, stands with the heroic people of Palestine and asks states and relevant international organizations to end their unacceptable neutrality in the face of the aggressor."

In a telephone conversation with Ismail Haniya, the chief of the political bureau of Islamic resistance movement Hamas on May 16, the commander of the Quds Force of the Islamic Revolution Guards Corps (IRGC), Esmail Qaani, reaffirmed Iran's support for the Palestinian nation in the fight against Israel, praising the resistance forces' military confrontation.

Speaking about the Iranian leader's "all-out support" for the Palestinians, Velayati emphasized that Iran has never hesitated over this position and consistently expressed its support to the Palestinians. Velayati also said he hopes that "soon, after victory", Haniya will meet Khamenei in person in Iran.

On May 9, Haniya sent a letter to Khamenei at the beginning of the flare-up of the Israeli-Palestinian conflict, urging Iran to express its "strong position" on the Al-Aqsa Mosque developments.

In recent years, Iran has reportedly provided military and financial assistance to Palestinian groups such as Hamas and Islamic Jihad, which have fought against Israel. Nathan Sales, a counterterrorism expert at the US State Department, said in November 2018 that Tehran funds Hamas and other Palestinian militant groups to the tune of $100 million a year.