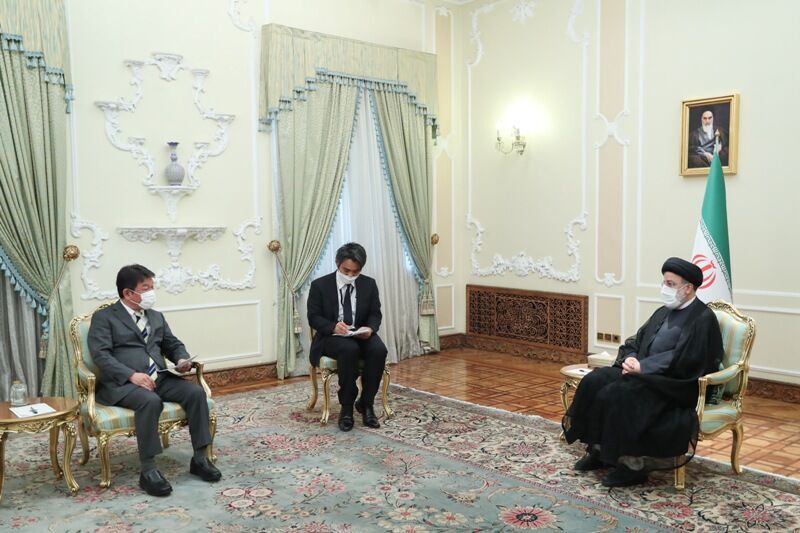 The Iranian president has discussed regional and international developments with the visiting Japanese foreign minister in Tehran, and called for the release of Iran's frozen assets.

"The delay in the release of Iranian assets in Japanese banks cannot be justified," President Ebrahim Raisi said at his meeting with Japanese Foreign Minister Toshimitsu Motegi who arrived in Iran late on August 21, the president's official website reported on August 22.

Japan was a leading buyer of Iranian oil for decades but stopped purchases to comply with the US sanctions imposed after Washington unilaterally pulled out of Tehran's 2015 nuclear deal with six world powers in May 2018.

Iran has been unable to obtain tens of billions of dollars of its assets mainly from exports of oil and gas in foreign banks, including $3 billion of its funds in Japan, due to US sanctions imposed on its banking and energy sectors. Before sanctions, in 2017, Iran supplied 5.2 percent of Japan’s crude oil imports.

Iran retaliated against the US by abandoning most of its obligations and accelerating its nuclear program. Several rounds of talks on reviving the JCPOA between the deal’s remaining signatories (France, Germany, the UK, Russia, China, the EU and Iran) and a US delegation were held in Vienna since April 2021. The incumbent US President Joe Biden expressed readiness to return to the nuclear deal following his inauguration in January 2021.

During the meeting, in response to the Japanese foreign minister's remarks on the importance of implementing the nuclear deal, officially known as the Joint Comprehensive Plan of Action (JCPOA), Raisi said that "Iran has complied with all its obligations under the JCPOA and it is the Americans who have not fulfilled their obligations and unilaterally withdrew from the international agreement and expanded sanctions."

The Iranian president also accused the European signatories of the JCPOA of refusing to fulfill their obligations under the deal following the US withdrawal from the nuclear deal, saying that "naturally, a country that has adhered to its obligations should be commended, and if a country has withdrawn from the deal and has not fulfilled its obligations must be reprimanded, and Americans must answer to the world public opinion in this regard."

For his part, the Japanese foreign minister said that "Tokyo has always supported the JCPOA as an international agreement, and we believe that the revival of the deal is in everyone's interest and can solve problems."