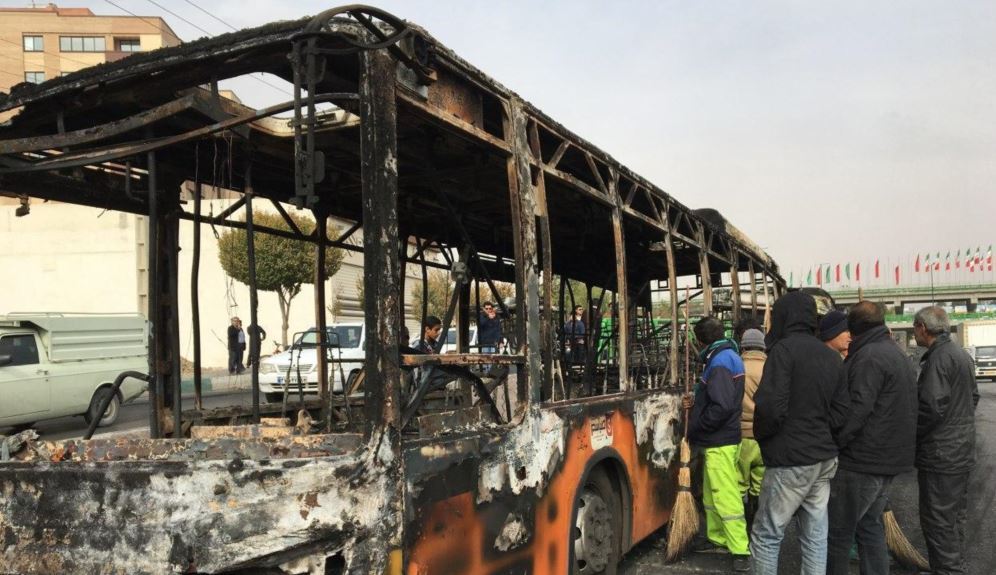 Iranians inspect the wreckage of a bus that was set ablaze by protesters during a demonstration against a rise in gasoline prices in the central city of Isfahan, November 17, 2019 / AFP

Iran’s foreign minister has described claims emanating from Washington that the U.S. government supports the Iranian people as “a shameful lie,” following a statement by the White House regarding the unfolding unrest in the country.

“A regime that avoids supplying food and medicine for patients and elderlies using economic terrorism, can never grossly claim that it supports Iranian people,” Mohammad Javad Zarif said, according to the ministry’s official website.

Zarif, who had brokered the 2015 nuclear deal with former U.S. Secretary of State John Kerry and is a graduate of American universities, described the U.S. government’s claims of support as bogus, saying, “U.S. Secretary of State Mike Pompeo should first take responsibility for terrorist attacks and crime against humanity against Iranians.”

Thousands of Iranians have been protesting over major fuel price hikes that have hit hard in a country already saddled with soaring prices throughout an economy riddled with heavy U.S. sanctions.

On November 16, referring to the countrywide protests against the gas price hike in Iran, Pompeo tweeted "As I said to the people of Iran almost a year and a half ago: The United States is with you." He also retweeted his July 2018 statement of support for Iranians that had been protesting the "tyranny" of their government. Iran is a theocracy and ultimately led by the Supreme Leader Ayatollah Khamenei.

In an exclusive interview with Radio Farda on November 18, Senior Policy Advisor to the U.S. Secretary of State Brian Hook insisted that Washington firmly stands with the Iranian people, and supports their desire for a government, "that doesn't rob them blind" while spending money funding what Washington claims to be terrorist activities in Damascus, Beirut, Baghdad and Yemen.

"We think that our sanctions have expanded the space for the Iranian people to demand a more accountable representative government," Hook said.

According to Amnesty International, at least 106 protesters in 21 cities have been killed in Iran. A Twitter post from November 19 reads, “verified video footage, eyewitness testimony & information gathered from activists outside Iran reveal a harrowing pattern of unlawful killings by Iranian security forces.”

Earlier, General Ahmad Nourian, the spokesman for the Iranian Law Enforcement Force, warned, “the police while respecting the public rights, will not tolerate those disrupting order and security and will harshly deal with them.”

In a statement on November 18, the Islamic Revolutionary Guard Corps stated, “if necessary, the IRGC will take decisive and revolutionary action against any continued measure that creates insecurity and disrupts the public’s peace.”

Countrywide demonstrations broke out on November 15, hours after the Iranian government announced that the price of gasoline, or petrol, would increase by 50 percent for the first 60 liters (15.9 gallons) and 200 percent for anything above that each month.

In the beginning, protesters largely chanted against the gas price hike, but the demonstrations quickly turned political with some of the protesters targeting the clerical establishment in their slogans. There was also loud criticism of Iran's support for its traditional allies in the region, including Syrian President Bashar al-Assad and Huthi rebels in Yemen.

In an address on November 17, Khamenei described insecurity as the worst calamity for society, saying “all evil centers in the world” have mobilized efforts to encourage unrest in Iran.

Authorities responded to the unrest by quickly shutting down the internet on November 15 in an attempt to disrupt the free flow of information and prevent protesters from using social media to organize themselves and inform others, including the outside world, about their protests, according to NetBlocks, the website monitoring worldwide Internet access.

Meanwhile, people in cities and towns in southeastern and southwestern parts of Iran staged massive demonstrations against riots and in support of security in the country on November 19. Holding banners and national flags, the demonstrators chanted slogans in support of the Islamic Republic, while shouting slogans against the United States and Israel, which voiced support for the riots.