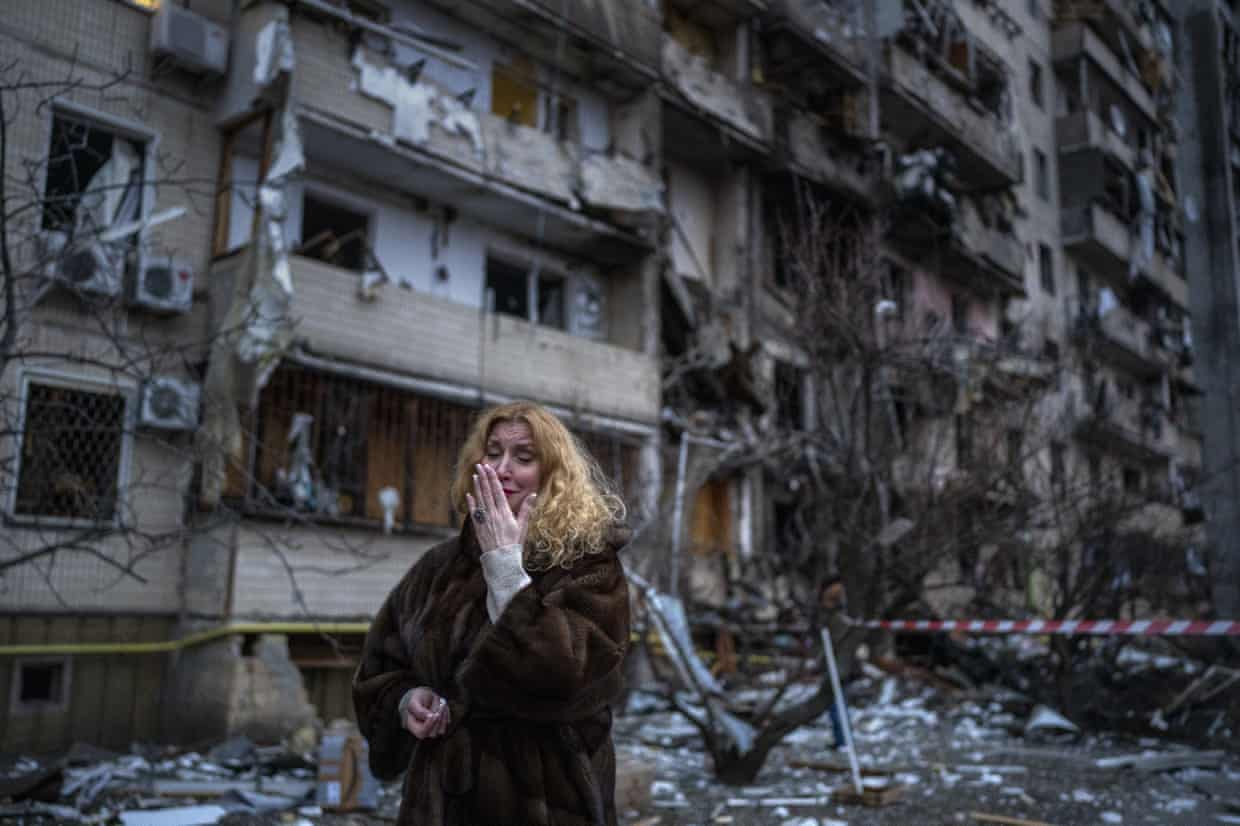 A Ukrainian woman stands outside her apartment block in Kyiv following a Russian rocket attack on February 25, 2022. / Emilio Morenatti / AP

Iran’s President Ebrahim Raisi has said that North Atlantic Treaty Organization’s (NATO) eastward expansion is a serious threat to the stability of different regions while referring to Russia’s assault on Ukraine.

“NATO’s eastward expansion is a serious threat to the stability and security of independent countries in different regions,” Raisi said in a phone call with his Russian counterpart Vladimir Putin on February 24.

He further expressed hope that “the ending of the ongoing developments would serve the ultimate interests of all nations and the region.”

For his part, President Putin described “the current situation” in Ukraine as “a legitimate response to the West’s decades-long violations of security pacts, and its attempts to harm Russia’s security.”

“The Ukraine crisis is rooted in proactive activities of NATO. We do not consider resorting to war the solution. The establishment of a ceasefire and focusing on a political and democratic solution is imperative,” Abdollahian wrote on his Twitter page on February 24.

“Collapse of financial markets and a sharp rise in energy prices due to the crisis in the easternmost part of Europe showed that instability and insecurity in all its forms in the eastern hemisphere will do serious damage to Western interests. The Ukraine crisis can be an instructive lesson,” he tweeted.

Iran’s Foreign Ministry Spokesman Saeed Khatibzadeh also accused the US and NATO, saying that “unfortunately, the continuation of NATO provocations, led by the US, have created a situation in which the Eurasian region is on the verge of entering a huge crisis.” He stressed that the Islamic Republic is watching developments in Ukraine with “deep concern” and called on the sides to “stop clashes and declare a ceasefire” and to begin “immediate negotiations for finding a political solution for the crisis.”

Khatibzadeh also added that currently, measures are being taken for facilitating the evacuation of Iranians residing in Ukraine.

In a statement issued on February 24, Iran’s embassy in Kyiv said all Iranians in Ukraine “must use any means necessary to leave” the country and urged Iranians to avoid military and high-risk areas and seek shelter.

Russian forces launched a major assault on Ukraine on Thursday. The invasion by land, air, and the sea began after a pre-dawn TV address where President Putin demanded that Ukraine’s military lay down its arms. In return, Ukraine’s leader Volodymyr Zelensky said his country “won’t give up its freedom.”

Ukraine has declared martial law and severed diplomatic relations with Russia. President Zelensky said weapons would be given to anyone who wanted to defend the country.