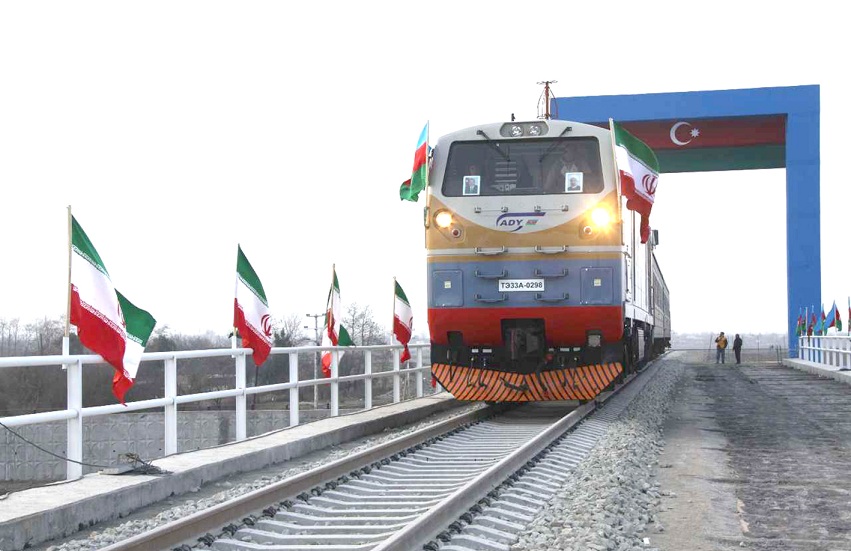 Eight kilometers of the railway lie within Azerbaijan, while the remaining two are in Iran. The line is significant because it links Azerbaijan’s rail network with that of Iran, specifically the Qazvin-Rasht-Astara railroad.

Caspian region neighbors Azerbaijan and Iran are moving forward with the joint construction of the Astara-Astara railway, which will link two cities of the same name via 10 km (6.2 mi) of rail.

“There is great interest for the Astara-Astara railway project in the world,” President Aliyev said during his trip to Turkey last week for the D-8, or “Developing 8,” summit, where he met with President Recep Tayyip Erdogan. “This project serves to develop the economic cooperation in the region,” Aliyev said.

Eight kilometers of the railway lie within Azerbaijan, while the remaining two are in Iran. The line is significant because it links Azerbaijan’s rail network with that of Iran, specifically the Qazvin-Rasht-Astara railroad.

The route was expected to come online in January of this year, but successive delays have pushed the launch date to February of 2018. Earlier this month, at the Argus Azerbaijan International Petroleum Summit in Baku, the chairman of Azerbaijan Railways CJSC said the first freight trains will operate sometime in late November.

“The construction of the Astara-Astara section of the International North-South Transport Corridor has been almost completed,” Javid Gurbanov said on October 12, Iran’s Financial Tribune reported.

The marriage of Iranian and Azerbaijani railway networks via the Astara-Astara route is expected to contribute to a new trade corridor not only in the Caspian region but across Eurasia. The line will form part of the 7,200 km (4,473 mi) North-South Transport Corridor (NSTC), conceived by Iran, Russia and India in 2000. The corridor consists of rail, maritime and road routes, stretching from ports across India to northern Europe, that will move approximately six million tons of freight across Eurasia. Over time, the capacity of the corridor will be increased to somewhere between 15 and 20 million tons per year.

Azerbaijan will absorb about 511 km (317.5 mi) of the route, via railway, which cuts vertically across its terrain and linking Iran in the south to Russia in the north. An overland ride from India to Europe will take just 20 days, instead of 45 days, and will shrink the current distance required for transportation to around 3,000 km (1,864 mi) after the corridor goes online, sometime within the next year.

“The Astara-Astara railway is significant in terms of both bilateral [Azerbaijan-Iran] and regional cooperation,” Iran’s First Vice President Eshaq Jahangiri said during a meeting with President Aliyev in Istanbul. The railway is expected to increase trade turnover between the two countries, which registered at $500 million in the first half of this year, to as high as $2 billion per year.