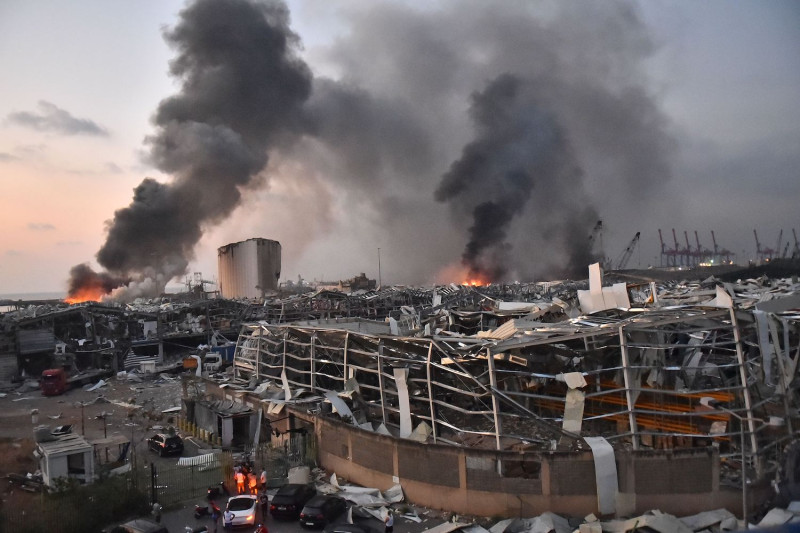 A massive warehouse explosion sent a devastating blast wave across the Lebanese capital Beirut, killing more than 100 people and injuring around 5,000, on August 4, 2020. / AFP - Getty Images

In a message to his Lebanese counterpart Michel Aoun, Iranian President Hassan Rouhani expressed sorrow over the tragic explosion at a warehouse in the port city of Beirut, which according to latest figures, killed more than 100 people and injured around 5,000. Rouhani expressed Tehran's readiness “to send medical and drug assistance for the treatment of the injured and other necessary medical assistance”.

According to Aoun, 2,750 tonnes of ammonium nitrate, used in fertilizers and bombs, had been stored for six years at the port without proper safety measures.

Despite the fact that several letters were sent to the judiciary asking for the dangerous material to be removed, no action was taken, both the head of Beirut's port and the head of customs said on Wednesday.

In a phone conversation with his newly-appointed Lebanese counterpart Charbel Wehbe, Iranian Foreign Minister Mohammad Javad Zarif said that “Iran is ready to deliver any humanitarian, medical and infrastructural help to Lebanon to assist it to handle the current situation”.

Meanwhile, the Iranian Red Crescent Society announced that it will set up a rapid deployment hospital and send a team of 22 medical staff to Lebanon.

The shipment of humanitarian aid, which includes 2,000 food packages and weighs 9 tonnes, as well as medicine and medical supplies, is being sent to Lebanon following the request of the director of Lebanese Red Cross, George Kataneh, according to the Islamic Republic News Agency.

Azerbaijan also announced its readiness to provide help to the Lebanese government after the tragedy.

“At this difficult time, I express the solidarity of the Azerbaijani people with the Lebanese people. The Republic of Azerbaijan will deliver financial assistance to the friendly Republic of Lebanon in order to eliminate the consequences of the tragedy,” Azerbaijan’s President Ilham Aliyev said in a letter to his Lebanese counterpart on August 5.

Moreover, Azerbaijan's Prime Minister Ali Asadov signed an order on providing financial assistance to the Lebanese Republic, according to which $1,000,000 will be sent to this country.

Iran has considerable influence in Lebanon thanks to Hezbollah, which the United States and other western governments consider a terrorist organization. Hezbollah and groups that support its possession of arms have a majority in the Lebanese parliament.

The new Lebanese government was established in early February after weeks of negotiations over its line-up which includes Hezbollah – a political and militant Shi'ite Muslim group based in Lebanon and considered a terrorist organization by Washington. US Ambassador Nathan Sales, a coordinator for counterterrorism at the State Department, said in November 2018 that Tehran gives Hamas and other Palestinian militant groups $100 million a year and spends about $700 million a year on Hezbollah.

Hezbollah, whose name means “Party of God” in Arabic, was founded in 1982, and is widely viewed as Iran’s proxy in Lebanon, which borders Iran’s arch-foe Israel. Hezbollah's paramilitary wing is the Jihad Council and its political wing is the Loyalty to the Resistance Bloc party in the Lebanese parliament.

According to the Israeli news website The Jerusalem Post, Hezbollah has a significant arsenal of explosives, missiles and ammunition, some of which is stored in populated areas across the country, including Beirut.

Danny Danon, Israel’s former ambassador to the United Nations, has accused Hezbollah and Iran of using the Beirut Port to transfer weapons through maritime channels and commercial companies, stressing that “unfortunately, the Port of Beirut has become Hezbollah's port”.