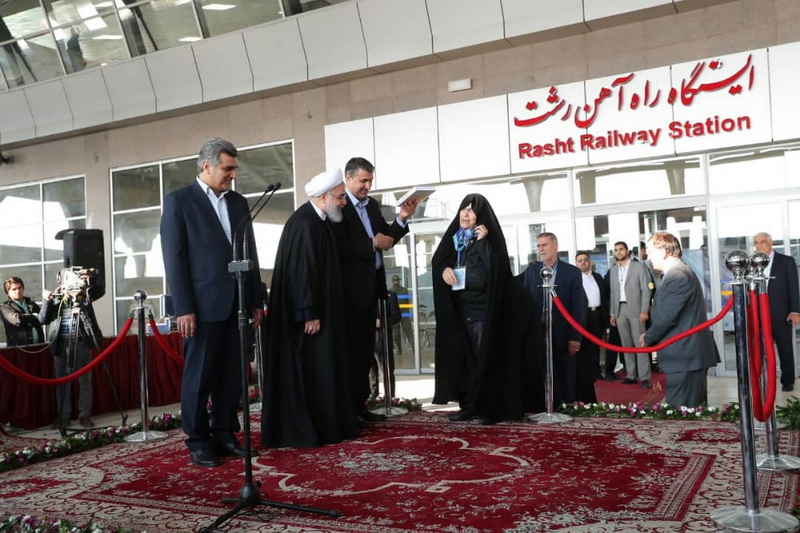 Two Caspian neighbors are more interconnected, thanks to the completion of a north-south railway line that links Iran and Azerbaijan.

“One of the very valuable instances of national and regional cooperation between the two countries is the finalization of South-North Rail project, linking through to Astara, that we hope will further deepen our relations,” Iranian President Hassan Rouhani said in a meeting with the Azerbaijan’s economic minister Shahin Mustafayev in Tehran on March 6, according to the president’s official website.

A ceremony to kick off the Qazvin-Rasht railway was held on March 6 in the northern Iranian province of Gilan. Javid Gurbanov, Chairman of Azerbaijan Railways CJSC, told reporters in Rasht, a city located in Gilan province, that more than 270,000 tons of cargo has already been transported using the Astara-Astara line.

In 2007 Iranian Railways, Azerbaijan State Railway and Russian Railways agreed to a building a new line that would connect the Iranian cities of Qazvin, Rasht and Astara with the Azerbaijani district of Astara.

In December 2017, Azerbaijan launched a pilot run of the Astara-Astara line, which forms a segment to the International North-South Transport Corridor – a 7,200 km (4,474 mi) multi-modal network of rail, road and sea routes that will move cargo throughout Europe and South and Central Asia. The Astara-Astara railroad runs 8.3 km (5.2 mi) in Azerbaijan down to the border with Iran, from where it extends 1.4 km (0.87 mi) to Iran’s port city of Astara.

During last week’s meeting, President Rouhani said that “economic cooperation and joint ventures will serve the history and people of the two nations.”

Azerbaijan’s economic minister described the project as a sign of strong relations between Baku and Tehran, saying, “Sending two Azerbaijani ministers for the Qazvin-Rasht and Astara Railway projects indicates that opening of this rail project is a very important part of South-North Corridor.”

“There is no obstacle in the way of development of Baku-Tehran relations,” Mustafayev said, stressing that private investment in Iran and Azerbaijan should be supported for further increasing bilateral cooperation.

During his visit to Tehran, Mustafayev met with his Iranian counterpart Farhad Dejpasand and Iran’s energy minister Reza Ardakanian.

In a meeting between Dejpasand and Mustafayev on March 5, the two sides agreed on signing monetary, financial and banking agreements that would help expand economic cooperation.

Over the past year trade increased by 74 percent according to reporting. Out of a total $450 million in bilateral trade, Iran’s share comprises $420 million.