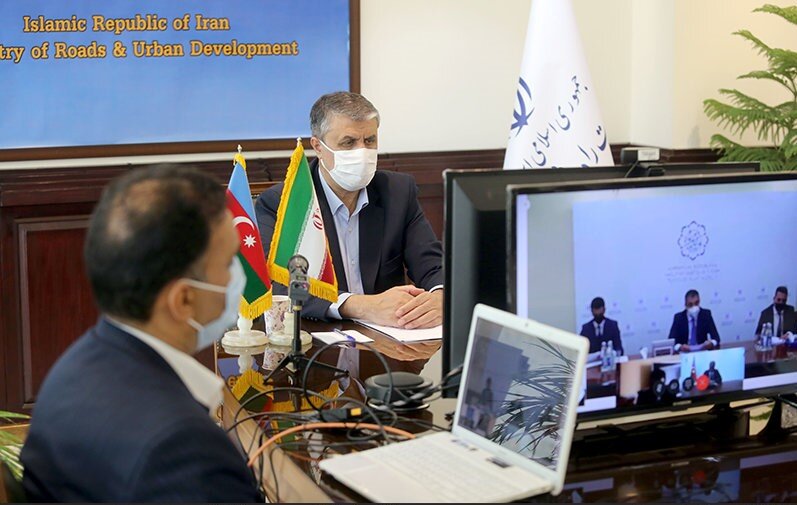 The Iranian and Azerbaijani transport ministers recently met to explore ways to boost bilateral cooperation in the area of transportation.

"Given the numerous areas for cooperation in the fields of roads, transportation, and other sectors related to these areas, we can help bring the two countries closer and strengthen cooperation between the two sides," Iranian Transport and Urban Development Minister Mohammad Eslami said during a virtual meeting with Azerbaijani Minister of Transport, Communications and High Technologies Ramin Guluzade on September 14.

Eslami briefed his Azerbaijani counterpart about Iran’s railway network, and the vast capacity of the country's railways in the north-south and east-west routes and its connection to the railways of neighboring countries, and expressed Iran’s readiness for the expansion of regional rail infrastructure and communications.

The Iranian transport minister pointed out that Iran's southern ports are connected to its national railway network and called on the Azerbaijani side to take necessary measures for both sides to benefit from these capacities.

An agreement on the construction of a new road bridge and a pedestrian crossing over Astarachay was reached to speed up the work to coordinate the draft Intergovernmental Memorandum of Understanding to create a legal basis for the construction of the bridge.

However, the Iran-Azerbaijan trade amounted to $179.2 million during the January-July 2020 period. Recently, the volume of bilateral and transit cargo transported between the two countries has increased.

Iran has carried out export operations worth $1.5 billion with Russia, via Azerbaijan’s territory in January-August 2020, meanwhile, the value of exports amounted to $4.3 million for the same period last year.

A key factor fueling bilateral trade is the construction and commissioning of the Astara (Iran) - Astara (Azerbaijan) railway between Iran and Azerbaijan, which has enabled more products to be exported.

This railway is an extension of the Qazvin-Resht railway, which is a key segment of the International North-South Transport Corridor which originates in India and passes through Iran, Azerbaijan and extends to Russia and the Gulf of Finland. The foundation of the corridor was laid on September 12, 2000, based on an intergovernmental agreement signed between Russia, Iran and India. Azerbaijan joined this agreement in 2005.

On September 14, the director-general of Tariffs Office at Iran's Ports & Maritime Organization (PMO), Khosro Saraei, and Head of Maritime Safety Department at the State Maritime Administration of Azerbaijan Vamik Rahimov stressed the need to further increase the flow of goods between the two countries' ports in the Caspian Sea, during an online meeting.

At the meeting, Iran's Ambassador to Baku, Abbas Mousavi, called on the two coastal states of the Caspian Sea to multiply their efforts and cooperation in the sectors of energy, economy, shipping, fishing, tourism and marine sciences in order to achieve the desired results.